Sitting in an academic conference room, I served on the search committee that hired him as Dean of Liberal Arts & Sciences. His scholarship on the writer Christopher Isherwood impressed me, as did his pragmatism and belief in the transformational power of education.

Walking down the narrow, uneven street to our 400-year-old Greek house rental, I first encountered them as they pursued their daily habit of sitting outside the courtyard and staring at the air. Spotting new blood, they pursued their other daily habit: dragging the marks in for tea and attempting to pry open their wallets. The crowning moment of our first interaction occurred when the wife slapped a headscarf on my head while yelling “Twenty lira!”

From the start, I enjoyed his humor and willingness to be honest and examine people and issues critically.

From the start, I felt taken aback by them and had to brace myself before wading through their stretch of street. I counted it a good day when I made it past without being tackled and urged to buy cheap beads for five lira.

Some months into our friendship and work relationship, he came to my Short Story class to do an evaluation. Jangling with nerves, starting out the class with a game of hangman on the whiteboard, I watched him lean back and listen to a favorite student as she stage whispered into his ear, “You’re the dean? You should give Jocelyn a raise.” In a one-on-one meeting later, I appreciated that he showed me a map of the classroom he’d drawn during the evaluation, and each seat was labeled with a student’s name. “How did you do that?” I asked, wonderingly. “In your job as dean, you come into contact with students and know their names?” “No,” he replied; “I was able to make this map because you used their names all throughout the class period. In a room of 40 students, in the first few weeks of the term, you used all their names when you called on them. That’s important. I noticed.”

Some months into our living as neighbors, they started calling us “komshu”–the word for neighbor, used mostly because they had no idea of our names. Although they attempted to throw our kids on the back of their donkey and tried to sell our visitors random trinkets, they eventually relaxed their hawking towards us and merely pushed offers of tea.

By the end of his first year as my dean, he’d become a true friend, usually stopping by for dinner and conversation at least once a week.

Before the end of our first year as neighbors, they had knocked on the door and asked for 50 lira to buy bus tickets to Ankara.

He has clear boundaries set for the use of his time, money, and energy.

They, shaped by an easy communal tradition, have no boundaries and sometimes pop over to hand a warm bowl of questionable leftover soup through the doorway. When Groom was deciphering the installation of our coal-burning soba heaters, Mr. Komshu notice and shortly thereafter took over the process, bursting into the house, shedding his shoes, becoming foreman of the pipes, and only counting the job as “done” once he’d had tea and cake.

He is fastidious, conscientious.

They are earthy, rumpled.

…as happened the other day when my former dean (now friend and welcome visitor), Jim, met The Komshus. Walking past The Komshu Stretch of Road, attempting my usual shucking off of offers of tea, I got snagged. Mrs. Komshu grabbed my arm and jokingly whacked my rear end repeatedly as she hauled me into her courtyard. Fortunately, Jim followed. He does like to watch a spanking. Before we knew it, we’d been led into the Komshus’ main living space–a windowless room balancing dirt and mattresses in equal measure, the only bright point being a television in the corner that blared news of a missing 15-year-old girl.

After a few minutes of drinking tea and nibbling at dry and burned baked goods, we considered how to make a break for it. But no. Not yet. There would be no release before entertainment. Mrs. Komshu brought in a drum, showing us how to bang away before turning the thing over with a flourish, pointing to the hole in the bottom, and asking all onlookers to deposit “Five dollars!” As she continued whaling away with a provincial tattoo, Mr. Komshu began clapping and dancing, attempting repeatedly to pull my unyielding self off the couch.

That request I could not refuse. 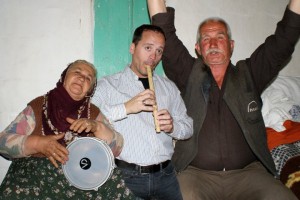 I’ve taken more than 4,000 pictures so far during our time in Turkey.

The Picture of the Year.

11 responses to “The Village People”