I’ve considered getting myself all Facebooked. Heaps of folks whom I like and admire, from George Will to Pat Buchanan to Ann Coulter, are on Facebook, and the idea of being able to poke them before spreading graffitti all over their walls holds no small appeal.

But then I remember I have a blog already and wonder if I need to create yet another “life by proxy” site for myself. The answer, so far, has been nope. I can’t imagine finding the oomph to maintain one more thing in my life, especially when I already have a fair number of plucking, exfoliating, and moisturizing regimes already in place. If I added any more responsibility to my daily list, I fear something would have to give, most likely remembering to pick up my daughter from Girl Scouts (rest easy, responsible parents: it’s a mere 6 mile walk home, and she’s a wiry little thing).

My reluctance to go Facebook was further fueled when I eavesdropped on a student after class one day.

Her name was Mindy.

You may have heard of her.

Mindy was chumming up to an unsuspecting classmate–one of her favorite past times–and opened with,

Me, stepping in for the save: Well, if she’s found love, that can never be bad, right? Does this mean you have two mommies?

Mindy: Huh? I said she’s so gay, not, like, a lezbot. Sometimes, Jocelyn, I don’t know what you’re talking about. She’s so gay because she joined Facebook. And she’s ancient, like 37, which makes it pathetic. I mean, who wants her mom trying to “friend” her?

Me: Hey, c’mon, people of all ages use Facebook! It’s a great way to find people you used to know and, um, see what they’re doing and where they’re living so you can go through a bunch of angst about how your life isn’t glamorous and hasn’t panned out in the direction you’d have hoped back when you were 20, but because you want to keep doing kind of a queer and creepy semi-friendship but mostly engaging in an ogling voyeurism of these past acquaintances, you act all smiley while secretly hoping they’re going to announce their divorce (you always knew Sean from your biology class was a rat bastard, so a little misery serves him right) and have to change their romantic status back to “single.” Indeed, Facebook isn’t just for you half-formed striplings! It has a rightful place in the lives of petty and bitter people of all generations, right?

Fellow Classmate, who has been sitting agape the whole time: Naw. It’s just sad when old people get on Facebook. Even Tom Petty.

Mindy, shaking her head ruefully without ever actually having encountered the word “ruefully”: Totally. My mom’s all saggy and only has this lame boyfriend, and she’s been keeping clean since she got out of rehab, so why does she have to go and be all tragic on Facebook? Seriously, she has about three friends on there, and I’m one of them. I’m kind of all, “Mom, maybe go back to the bar, or get a hobby or something.” She’s completely going to want go start going out with me on the nights when the mom of my baby’s daddy’s other kid watches my daughter. She’ll probably (dramatic, put-upon sigh) start asking to borrow my jeans, too. I mean, GAWD.

————————-
So, for now, even though I know heaps of y’all are ancient geezers and proud members of the Facebookian world order, I’m going to continue to resist creating the sad and pathetic presence I would contribute. Like Mindy’s mom, I’m doing pretty well at those things all on my own.

Just me, my rainbow-covered poncho, my John Travolta tote bag, and a borrowed pair of Mindy’s jeans.

We ride the bus sometimes. 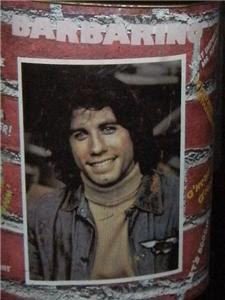 Thanks to Jesus and his lot–and Lot’s Wife–I need some new swears.

If it weren’t for them and all their high-fallutin’ “Biblical history,” I probably would never have heard of the Dead Sea and its abrasive salts.

Which means I wouldn’t use sea salt in my homemade olive oil/cedar essence/sea salt body scrub that I daub on during Almighty Showertime Exfoliation. Instead, I would use pine needles and lentils softened with sap.

And if I’d never heard of Dead Sea salt and therefore didn’t use it in my sacred exfoliation process, then I would be a nicer person with a cleaner vocabulary.

You see, I have a little trouble with the order of my shower agenda; I get wet, add shampoo, slather on the soap, shave, rinse, add conditioner, and then scrub up with saltishness. But Sweet Maria von Trapp, if there’s one thing on the planet that scourges the body with an evil necromancy, it’s salt applied with great vigor to freshly-shaved legs.

To make things worse, this morning I managed to nick one my legs as I shaved. Then, a mere 74 seconds later, having forgotten all about the recently-inflicted Nick (I did that one hungover morning in college, too! But that Nick had blue eyes, little endurance, and lacked the depth of the one on my leg today), I massaged on a hefty palmful of my sea salt scrub, making sure to grind and rasp it into every crevice of my newly-minted nick.

As it turns out, the sins of the razor do not wash away. Instead, they fester and protest, as did my mouth at that moment.

Thoughtlessly, I shouted out a “Tarnation, you wascally wabbit!”

Off the tip of my tongue tripped a “SHEEE-IT” and a quick “Hell would be a mercy right now!”

But, frankly, all my efforts at verbal expressiveness fell flat compared to the stinging, briery pain that shot through my stubble-free gam as salt met blood.

Thus, I curse–ineffectively–the salt that buoyed the Lamb of God.

Damn it, Jesus. Just damn it.