I wasn’t kidding. This story is a continuation of the previous one. I know you’re all, “Well, even though I didn’t read her last post, I’m not about to go back now and waste my precious time on it. No, I’m NOT. I’m just going to read this one here and piece it all together. I’m smart. I can do that.”

Yes, honey. Yes. You’re smart. And you’re pretty and sweet, and the other kids just don’t understand you.

But go back and read the previous post anyhow.

You haven’t even scrolled down to it yet, ya Big Faker. It was called “Like Searching for a Grain of Broken Rice in a Bowl of Particularly-Soggy Shredded Wheat,” and it involved my talented girl parts and a 95 minute run, so you really don’t want to miss it.

Oh, HI. I’m glad you’re back, you upstanding and honest reader who’d never skip a preliminary post in an effort to cadge four extra life minutes during which you dreamily picture what Sarah Palin looks like with her glasses off, hair down, her “energy plan” a’roarin’. Now that you’re up to speed:

So yup. There we were the next day, the Assembled Family Jocelyn, ready to fan out the family’s collective vision and scan every stick, leaf, and dead raccoon on a very particular stretch of the Superior Hiking Trail, in search of my shiny silver Camry car key.

(if you have no idea what I’m referring to and are just kind of nodding and smiling blankly after that last paragraph, that’s because you are one seriously lazy cuss and didn’t EVEN go back and read that previous post, Mrs. Pants On Fire…like it’s so onerous to take a few measly minutes out of your life to catch up with the rest of us. You’re just a living, breathing, personified “War of the Worlds” broadcast, fooling the entire audience into thinking one thing’s happening when, in truth, you’re just sitting in your lazy chair drinking Diet Mt. Dew and pretending to be “an avid blog reader and defender against alien attack”)

Before the family gathered around, I had done some kitchen-table triangulation and narrowed down the most likely area for the key loss–to a spot called “Pee Alley.” Knowing this, we could park on a nearby road and hike in a few hundred yards, looking all the while for browning ferns and a mish-mash of footprints that indicated a Woman/Ipod scuffle.

But first, we had to get the kids out and on the trail, the motivational script of which read,

Me: “Okay, now that you’re both home from school, we’re going to drive up to the spot where Mommy was running yesterday when she lost her key.”

Kids: “Mommy, why do you talk about yourself in the third person? It creeps us out.”

(okay, they didn’t say that, as they’re still learning–and will be for at least another decade–that anything beyond first person exists in the world)

Me: “So, listen, we’re going for a lovely hike on this sunny fall day. Our mission: to find a silver key.”

Me: “In what universe do children of mine not like hiking? This is unimaginable–preposterous–like women over thirty wearing leggings under a tunic blouse! Clearly, you are not the true people I grunted out from my body; anyone fostered under my care is destined to have a life-long fixation with sumacs and granite and singing The Smiths amongst them. Pod-people, you are clearly not my children. Either you hike with Pappy and me, or I love you not.”

Me: “The key is very shiny, you know, which means it’s glamorous. Only the cleverest of people could ever find the treasure that is a lost key in the woods. Let me tell you a tale about the kind of person who only wishes he could find a key in the woods: there was a guy once who seemed, on the surface, to be clever, a guy named Johnny Keyfinder. One day, he plunged into the woods, in search of a key. After many hours, he emerged, keyless, having fooled himself that he’d found something better: a hand full of appleseeds. Listen to this: old Johnny ‘Keylacker’ Appleseed then wandered the country for years after, holding his seeds in one hand and shaking hands with the other. Now how clever does he sound to you? Not very, eh? Not bloody clever at all. Kind of dumb hickish, if you want to use real words about it. Seriously–how did he think he’d wipe himself or cut a steak, what with both hands already so busy? This man was NO keyfinder. He was just a busy-pawed gladhander. Eventually he keeled over, appleseeds in hand, with his last words being, ‘I never did find me a key, so what’s it all been about?’ His legend pales in comparison to the one you two are going to create today, when you hit those woods and find Mommy’s key!!!!”

Kids: “Gracious! He was hebetudinous. We must differentiate ourselves from that dolt. Hie now–to the horseless carriage. Oh, and thanks for the thesaurus last Christmas, O Maternal Matriarch.”

Me: “Huzzah! The afternoon is ours to seize.”

The second we stopped the car, as predicted in a secret wink-wink-eye-rolling exchange between Groom and me, the kids did shape up and forget their hatred of Woods. They ran to the trail and began bushwacking, peering, and 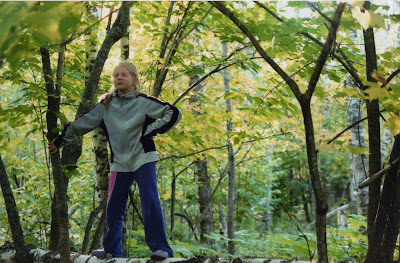 herky-jerking on the balance beam known as “uprooted and suspended birch.”

Two minutes in, the true beauty of the afternoon became apparent, particularly to the Star Warsian Wee Niblet:

We were in Ewok country.

Vexingly, Ewok Country is rife with stands of browning ferns, each looking more like a possible pit stop for a full-bladdered runner than the last.

But the Jedi Youngling was not daunted. 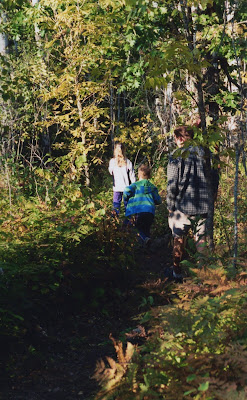 Niblet gathered light saber sticks, thrashed the bushes in search of battle droids, and continued his Jedi training, which has advanced considerably in the last few months. Specifically, his ability to harness The Force has gained finesse. 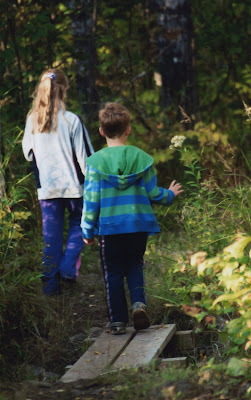 Concentrating, the lad raised his hand and channeled all his fledgling powers into using The Force to find that key.

Fortunately, Jedi Master Groom was in the lead. Stopping suddenly and staring intently at the ground, Groom called to his Padawan, “This looks like a spot in need of your attention, Boy. Focus your powers here, and let The Force do its work.”

Skipping along, humming a new song learned in kindergarten (“Hell-ooow/How are you?/I’m so glad/To see you”), holding his Force-channeling hand in the air, Niblet abruptly pulled up short.

He stared hard for a minute, soaking in the quiet of the immense trees surrounding him, and then carefully bent down.

When he straightened to his full height–equal to that of the brown ferns cloaking him–he peeled open his hand, on which balanced–

by the Original Light!– 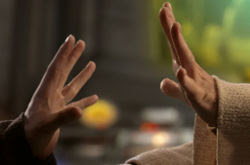