It was full-frontal foggy the other day. This wasn’t just film noir, dry ice kind of stuff. Nay.

This was, “Holy Haunted House, but I’m holding my hand up in front of my face, and I can’t see it!”

Okay, it wasn’t my actually my hand, but I was waving something vaguely hand-like up in front of my face–a glazed bear claw from the donut shop, in truth–and I couldn’t see it a bit. Which makes it all the more fortuitious that pastries can be eaten by touch and require no sight.

Indeed, it was so foggy last Monday that a person might have been forced, there, outside the bakery

to use only mouth feel and feather-light fingertippling to feel her way around yeast and glaze and buoyant dough, until the claw disappeared and only chin crumbs remained. Yup, it was Sticky Face Foggy the other day, friend, the kind of day where pride is unnecessary, as you can’t even see yourself falling upon 500 calories of wickedness in a frenzy. You might as well eat three, for only the shadows know.

Some hours after that person Helen Kellered her way around a baked good, she awkwardly high-fived her healthy self and went for a run on the Superior Hiking Trail. Getting to the trailhead was an adventure in itself, as visibility was down to approximately 15 feet, which meant, once she knew roughly what part of town she was in, she had to flip on her blinker and then drive another 400 yards in the turn lane, muttering, “They ate Hutchinson Street. There is no Hutchinson Street. Yoo-hooooooooo…Where are you, Hutchinson Street? Maybe Hutchinson Street looked like a bear claw to someone this morning, so they mauled it with their teeth. Whoa, jinkies! There it went. That little curb thingy back there was Hutchinson Street. Looks like nobody’s behind me–but who would know, on a day like today?–so let’s throw it into reverse and hit it on the rebound.”

Eventually, our nameless bear claw ravener, also named me, forwarded and backed herself to the trailhead. I parked, pretended I was Catholic so I could cross myself dramatically, and headed into the woods. 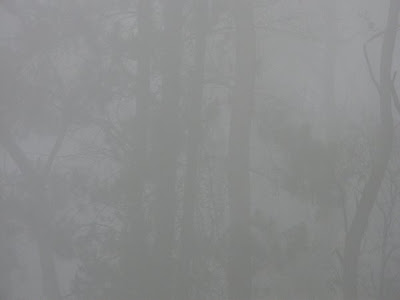 Blundering through the fog, I listened to the Halloween podcast of “This American Life,” which featured the anxiety-inducing tale of a woman outside her country home who was attacked by a rabid raccoon on the driveway. Only after she managed to pin the ‘coon by its neck and feel around in her pockets for something–anything–did she find her cell phone, with her that day by a fluke. She called her son, and within minutes she had the aid of her family. But, get this: after her husband bashed at the rabid beast with a stick for several minutes, trying to kill it, the thing only got angrier and more aggressive. So they got a tire iron, the ultimate meat tenderizer, whereupon it only took another twenty whacks to put the poor, diseased creature out of its misery.

As I listened, I was reminded that going for a trail run is really relaxing, especially when you’re making your way through the forest juggling an enormous branch, a shard of broken glass, a granite rock, and potentially-rabid-animal-blinding confetti made of leaves.

What? I heard a puma.

And a badger. Discussing, in an exchange of hisses and gnarf-gnarfs, which parts of me looked most tender.

I had the children to think about, as I armed myself, intent on self-preservation. Wouldn’t want Niblet and Girl to grow up without a mother and all. Who else would dissect for them the talents of American Television Icon Chuck Woolery? (one day, when they’re ready)

Equally as heebiejeebie-ing as the thought of being stalked by rabid monsters was this worry: in that soupy fog, was my face going to melt?

Or in a slightly-brighter scenario, I posited that I might get back to my car and look in the rear view mirror, only to see this:

Fortunately, nothing used its cougar fangs or bear claws to tear at my flesh that day. And my face didn’t decompose into a smoky masque.

In fact, the whole thing turned out unexpectedly well. The scary podcast ended with David Sedaris visiting the morgue for kicks and giggles. The carbo-loading I’d done earlier in the day kept my tiny cat feet happily gliding over the trail. And the best bonus of all–that which keeps Bono looking 48 instead of his true 87 years old–is that mist and fog are hella good on the pores.

When I finished my run, flushed and trail tangled, I dropped my arsenal of weapons and hopped into the car, doing a quick check of my look in the rear view–for stray branches that might be dotting my hair.

HAWP. Looking back at me was this: 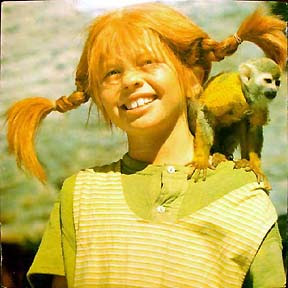 Oh, joyful, face-tightening fog, you made me ten again! I am glorious! I am magical!

Then the curious goiter on my shoulder bit me.