In terms of female friendships, I have sixty-eleventeen inspirations but only three true Women of My Life. One of these three I met in 1985, in a dorm lounge, where she was being way too cute and cynical and cutting for her own good. Intimidated, I decided I didn’t like her.

She kept being cute and cynical and cutting, however, and at some point, I realized I loved her. Eventually, I went with her to Ireland for a semester; I listened with her to The Pretenders; I cried with her under a sink; I stood up with her at her wedding; I learned new dimensions of pain and guilt from her during her divorce. Twenty-three years later, she can make me blow open a kidney with laughter and provide the comforting feeling that someone in the world knows everything about me and still doesn’t make a citizen’s arrest. She and I? Lifers.

This dearling gel, called Colleen, has spent the last few decades shedding her armour of cynicism and allowing kindness and vulnerability their rightful place.

She is so cool.

Who better, then, to relate a pivotal moment for the U.S., the moment when millions of citizens felt–hokey as it sounds–a renewed sense of possibility?

I refer, of course, to the recent presidential election. Colleen lives in Chicago with her beau, Tim, and threw her energy on election day towards hope. Of that historical day, in an historical place, she writes:

—————————–
I spent the afternoon of Nov. 4 curled up next to the elevator on the floor of the tiny lobby of a nondescript downtown Chicago office building, peering at a list of Pennsylvania voters, clutching my iPhone in one hand and plugging my ear with the other to block out the cheery voices of a dozen others who’d fled the steamy warren of basement offices crammed full of Obama campaign staff and eager volunteers. I left lots of cheery voice mails reminding people to vote. A few of the people who picked up the phone were curt; two hung up on me as soon as I said “I’m a volunteer with the Obama campaign” (which I found thrilling to say), but most were delighted to tell me that they’d voted for Obama.

Making calls did what I hoped it would: distracted me from my anxious, audibly-whamming heart, and made me feel like I’d done some little thing besides sending money to fight the good fight. I hopped the El to Tim’s office at 5:00. We sat at his desk eating takeout sushi and obsessively refreshing news Web sites until we joined the river of people heading to Grant Park around 7:15.

It’s impossible to be a misanthrope in the midst of an enormous, good-natured crowd. Nobody shoved, nobody was drunk or obnoxious, nobody bitched about the long lines for the metal detectors, everybody joshed good-naturedly with the cops, everybody was smiling and laughing. As the field slowly filled, people were glued to the Jumbotron screen showing CNN. (Seriously, Bill Bennett, shut your giant head the fuck up. Best comment of the night, from an incredulous James Carville: “After the last eight years, I hardly think y’all have any authority to tell Barack Obama how to govern.”) Roars went up every time CNN projected a state for Obama. Boos for each state called for McCain. Roars whenever the screen showed the live feed from the park. That’s us! Wave! Woooooooo hooooooo! We’re in the middle of history! When the California polls closed and CNN declared Obama the winner, people screamed, cried, hugged strangers. I felt a funny mixture of giddiness and gravity: We did it. Take that, haters. I can finally let go of eight years’ worth of anger & embarrassment over what’s been done to my country. Oh, god, there is so much to heal and to fix.

The crowd was surprisingly quiet during McCain’s concession speech, booing only when the camera shifted to Sarah Palin. We waited another hour for Obama to come onstage, turning to one another every few minutes and saying incredulous things: Holy shit, this is real. I can’t believe I’m here for this. Oh my god. Yes, we can.

I said the Pledge of Allegiance and really meant it.

When Obama and his family appeared at 11:00, a quarter of a million people whooped and cheered and hallelujah’d. I’ll never hear anything like it again as long as I live. I teared up at the sight of him and his young family, beautiful and smiling and willing to take on this tremendous task for us. When he began to speak, I started to flat-out weep, big gasping sobs of joy and pride and relief (and a little bit of fear for him, too). Yes, we can, everybody chanted along with him. Yes. We. Can.
—————————-

Here’s a picture for you. Tim is dead center in the “frame” formed by the two flags; Colleen is to his left, leaning on him. 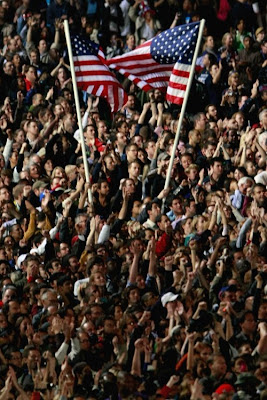