Dear Jeebus and Pilgrims Who Are Dead: I Am Thankful For Teaching That Is Never Dull 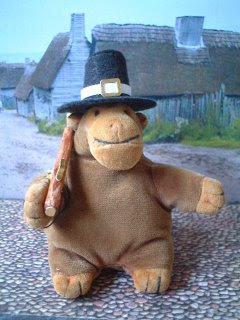 After a few days of putting out feelers, I managed to hook up Mindy with an office on campus that helps with things like food and cars and telephones. Now, dauntless, even in the face of an STD, Mindy continues to spread her witless charm throughout the Land of Freshman Composition.

After class last week, she began chatting up a classmate that she knows vaguely, someone more interesting than most:

Him: No, not really. I’m trying to remember–I was always small and scrawny, but then we moved somewhere, and I shot up. It was traumatic. Hmmm. Where did we move? I think we moved to Indonesia, and then I was starting a new school–

Her: Wait? What do you mean, like, Indonesia? I’ve heard of that continent! Why would you move there?

Him: Just my parents’ work. It was just their jobs.

Her: What is their job?

Her: WAIT. A diplomat? So you’re all rich?

Him: No, not rich. My dad just works. He has a job, and part of it is that we moved around.

Me: (stepping in for the save; reaching out and patting Mindy’s shoulder affectionately) Yes, Mindy. That’s right. His dad is the duke to the king…of the United States of America. The duke to our king. It really is a great honor. Maybe one day, you can work for the king, too, holding his mirror or combing out his wigs. Reach for the stars, Peanut.

19 responses to “Dear Jeebus and Pilgrims Who Are Dead: I Am Thankful For Teaching That Is Never Dull”