We just got back from 12 days in southern California. I had virtually no Internet access there. So I missed blogging and reading and such. But I put my feet in the Pacific and watched whales leap and had a ginger lemon mojito. I got by.

Thus, I will type only short, declarative statements. The trip was great. We hung with my mom. We visited with dear friends. We went to our first American Girl store–one of four in the U.S. My friend who took us there noted that, upon her first visit to such a place, she understood as never before why Al-Qaida would want to bomb us. She was standing smack dab in the midst of all of our too much, too big, too slick, too smug-ness. She got it. Then, moments later, she spotted her first Samantha & Nellie doll set and was lost in a different kind of romance. I was struck similarly. Like good Americans, we threw dollars at their open cash registers while ducking and covering.

Meh. Short, declarative statements are tough. I re-focus. We also had grand kid days at Sea World and Legoland. We hiked in Palm Springs. We toured the Universal Studios back lot and stood in Whoville and next to the Bates Motel.

Lacking more time to type declaratively, I give you the pictorial overview: 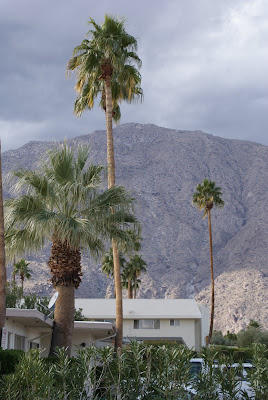 Lots of places looked like this. These aren’t birches, Sven. 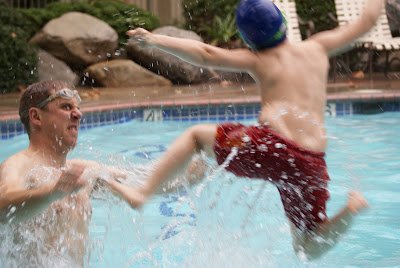 On Christmas, we spent a good part of the afternoon swimming in the pool at my mom’s apartment complex. Because it’s an “over-55” place, the elderlies insist that the pool is heated to 80 degrees, or they refuse to attend the water aerobics class. Thus, even though it poured rain on us, we were plenty warm. And airborne. And, in the case of Groom, scary-faced. 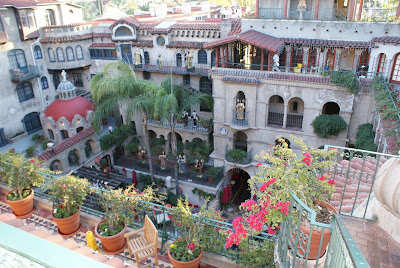 This is the inner courtyard of the stunning Mission Inn, part of downtown Riverside. We’d heard Riverside is the armpit of southern California, but personally, I thought it was great. Some nice workers at The Coffee Bean across the street from the Inn handed me a peanut butter cookie with a Reese’s smashed on top, too. I could live in such an armpit. 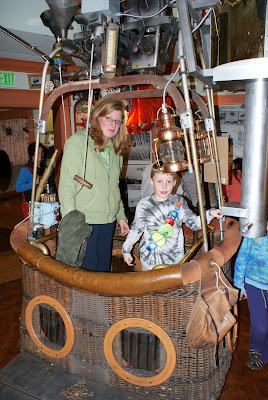 A little drive down to Temecula took us to the “house” of Professor Phinneas Pennypickle. Visitors get to explore his inventions. Niblet and I took this balloon to a place called Oz. Then a house fell on me, and he became munchkin mayor. 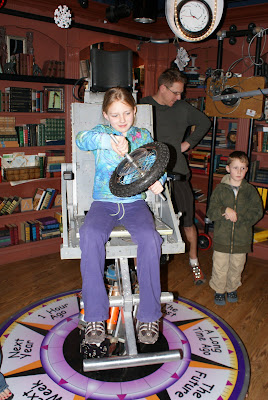 Gyroscopes can make you spinny. 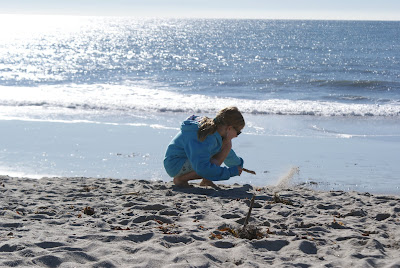 We spent an afternoon visiting a couple of beaches between Carlsbad and San Diego. Girl loved it, except when we asked her to do a Baywatch run, and she fell and skinned her knee. And we’d thought the waves were dramatic. 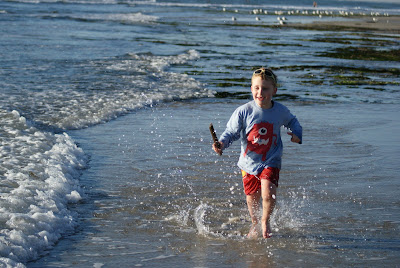 As it turns out, all a five-year-old boy needs is a stick and an ocean. And a change of clothes. 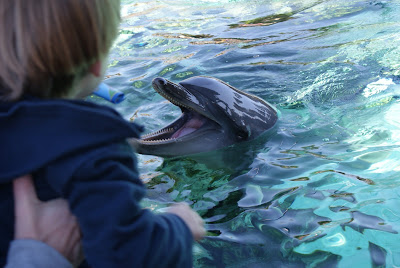 This shizz will leap out of the water at you when you go to Sea World. After we snapped this photo, that beast ate the boy. One gulp. Followed by a polite round of applause from appreciative onlookers. 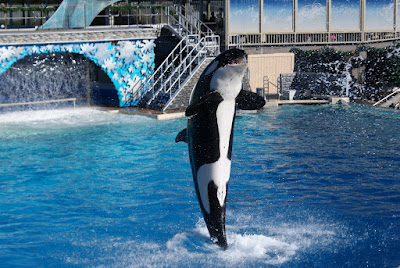 Shut up already that I burst into tears the first time the music swelled and Shamu swept up into the air like that. Shut. Your. Fuzzbuster. 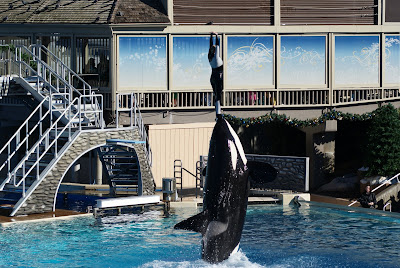 After we snapped this photo, that beast ate the trainer. One gulp. Followed by a polite round of applause from appreciative onlookers. 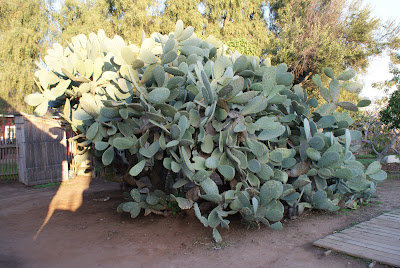 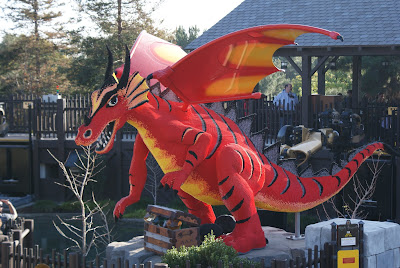 Legoland is the best art museum I’ve visited in an age. Thomas Kinkade could not even make this dragon out of legos. 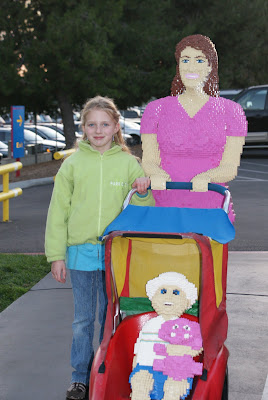 For awhile now, Girl has wanted a baby brother. In a few years, she’ll want a new mother. For one brief moment, she had both. I hope she enjoyed it, ’cause neither ain’t happenin’ no other way, no how. 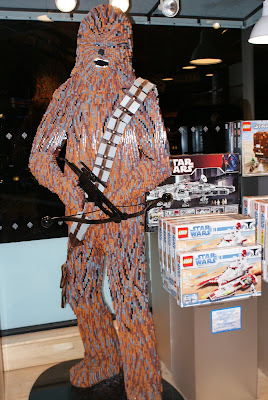 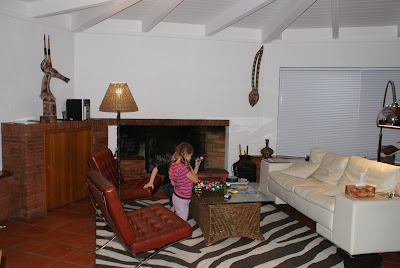 We also went to Pasadena to stay a night with my mom’s friend, Tom. He’s an eccentric, but I want his house and art (there’s a Darth Vader made out of legos in the guest bath) and furniture. He can keep his eccentricity. I’m sure I wouldn’t know where to put it. 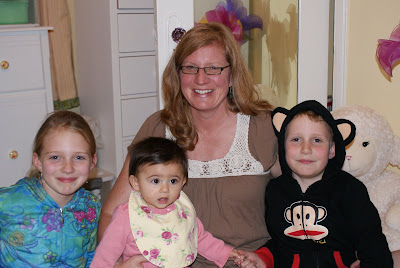 One of my college roomies lives in L.A. and squeezed that li’l honey there out of her loins last April. I’ve advised her to never take Baby to Sea World. A dolphin would gulp her as an hors d’oeuvres, for sure. 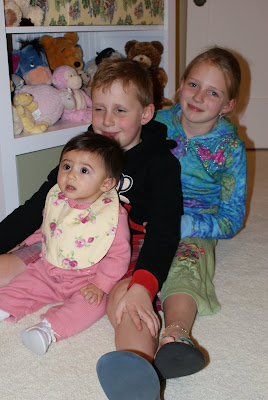 Niblet likes to smoke a little reefer before he cuddles A Teensy. 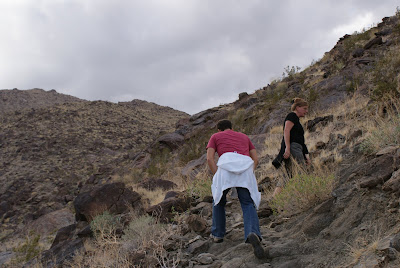 The mountains around Palm Springs do go up. If you comment about this picture, please note loudly how good my pal Jim looks. He’s all strung out about “being fat.” He should have been more worried about my kicking his sleek ass at Scrabble that day. 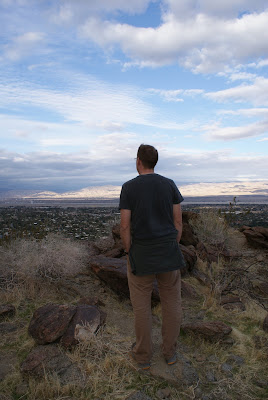 You do know that the skies taken on heavenly aspect, and majestic vistas unfold whenever Groom is around, right? 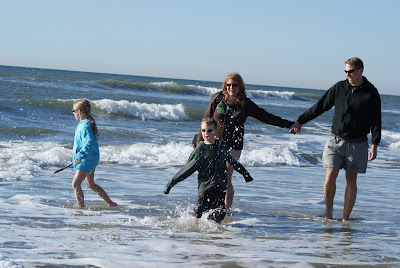 Rather than embracing it as a time of change or new beginnings, I am hoping fervently for a continuation of the same.

More. Of exactly this.

For a long, long time.