A few days after his surgery, Mr. Jocelyn’s Groom hit the skids emotionally, a not uncommon occurrence as the body detoxifies from all that anesthesia and hospital food. In the face of day after day in bed, with two more weeks before he’s allowed to take a soothing bath, and a month or more before he’s able to exercise, a certain natural depression has set in. I’m sure it doesn’t help that I am the brilliant, glowing delight of his life, my very presence offering up all the balm of Vaseline on a chafing crotch, yet I’ve been busy taking out the compost and recycling and folding heaps of laundry and chauffering the kids to Girl Scouts and karate and teaching classes and making tacos and frittatas…which means I only ever sit down and look him square in the face after 9 p.m.

Sweet Nurse Cherry Ames, but that makes for some long, lonely hours of convalescence for Our Hero.

Fortunately, all it took was the projection of a “Groom Needs Cribbage Companions” bat signal into the night sky, and our troops of friends and family have rallied ‘round his tender frame and swollen package. He’s been telephoned and cribbaged and Quiddlered and Mexican Train dominoed into distraction. All these pitcher-inners have been the highlight of the week for us.
Of course, because I’m a licensed member of Life’s Rich Pageant, I’ve had other highlights:

1) I had one of those crazy-ass hangnails that is painful and long—a real sweater snagger—and, stuck in a situation with no nail clipper, nevertheless managed to use my ferocious incisors to gnaw it off, with only minimal blood loss. Snap.

2) The local microbrewery has just put out its seasonal recipe, an Old Man Winter Warmer Ale, which is essentially a barley wine. It’s artisanal stuff, and I am like the National Endowment for the Arts in my semi-constant, passive/aggressive support of creative efforts. I’ll drink their ale. But only sometimes, when it pleases me. This week, it done gone please me veddy much. Other weeks, I save my support for a crucifix floating in urine.

3) One golden day that I’ll call Wednesday, I ran nearly seven miles on the treadmill at the Y, enjoying every minute and setting a PR for that distance. Of course, I was only able to hit that mark due to my immersion in celebrity gossip mags. Thank you, Brangelina, for keeping your twins out of sight and making the tabloids wonder if you’ve eaten them (slow roasted on a spit makes infants particularly tender). I read that story during mile five, which flew by. Jessica Simpson’s high-waisted jeans eased me through the last crippling quarter mile. All I need to get to the finish line is a size 6 frame packed into size 4 denim.

4) Niblet and I reveled in our first visit of the year to one of my happiest winter diversions: the local pack ice. The lad (who also goes by “Paco” around the house these days) got to use his homemade ice picks and scale Everests of jumbled slabs, until scurvy eventually set in and, after a last-ditch attempt to secure help by leaping across ice floes to Wisconsin, well, we collapsed, but not before scratching out, in an echo of arctic explorer Robert Scott, the final words of “For God’s sake look after our people.”

Of course, since Niblet’s six years old, by “people,” he meant his Star Wars Lego Anikin Skywalker and a host of Playmobil soldiers. Okay, and an Ariel The Mermaid Barbie that he sleeps with but nobody needs to ever ask about, so just shut up already and look after them like he asked in his final letter, unless that’s just too hard for you, Mrs. Poncy-Who-Sits-In-Her-Warm-House-While-Some-Of-Us-Explorers-Risk-Our-Lives-To-Um-Well-Er-Walk-On-Ice.

Despite the dangers, we did have a good afternoon sliding around this junk: 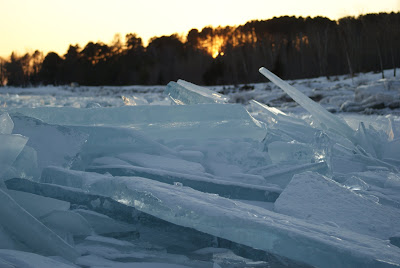 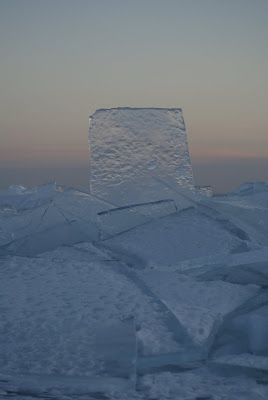 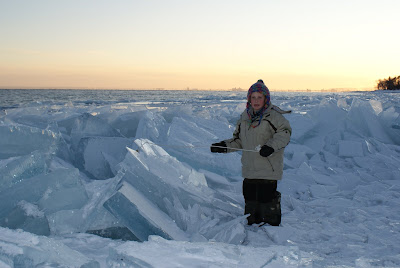 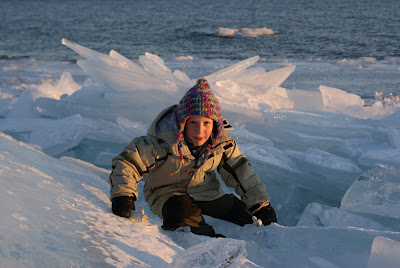 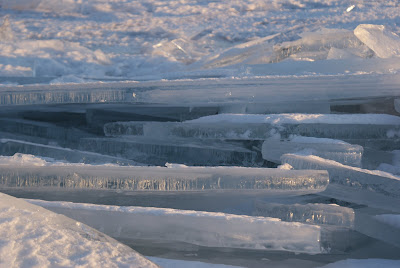 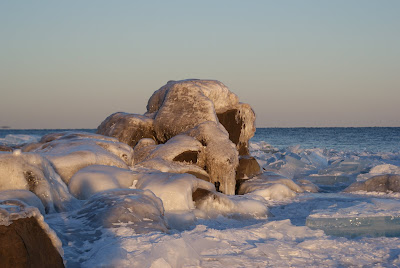 Paco has been wanting a pet. I pointed at that rock and told him I’d gotten him a woolly mammoth at Petco. He totally bought it, and now we have to drive back there every day and drop an offering of 100 pounds of willow and fir boughs into a ginormous doggie bowl. 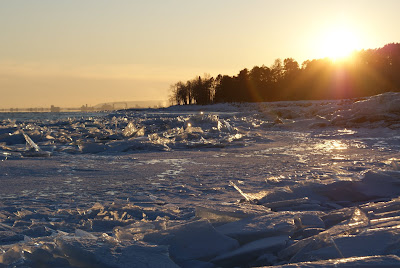 Just as scurvy threatened to team up with rickets and anemia and end the expedition for good, Niblet and I cleverly resorted to cannibalism, ate each others’ ear lobes as appetizers, and found the steam to drive home.

There, while we broke the freeze off our paws and watched Groom wincingly pack another bag of snow to his manlies,

the glory that he’s missing.

20 responses to “Starring Goofus and Gallant”