Contractually, I’m required to hold a certain number of office hours each week, during which I am available to students, ready to answer their questions, comb through their rough drafts, soothe their wounded souls, listen to their tales of unwanted pregnancy and court dates. Contractually, I am supposed to be buzzing and pacing and twitching as I await Students in Need.

The contract can’t make the students show up, however. And may I just say, with a dramatic sweep of the back of my hand across my forehead, “Whewww.” If they showed up with any regularity, I’d have to be on my game and sympathetic and ready to explain the multitudinous rules of the comma. Bo-ring. Quite frankly, in life, I prefer to ignore the game because I’m too busy chatting with my daughter about how her language arts teacher sometimes bursts into tears when she’s yelling at the class; I prefer to un-non-de-sympathaticize and, instead, act the callous brute; I prefer to, use, commas, anywhere anytime anyhow and sc,rew,,,th,e rules,

Indeed, I prefer being left alone in my office during those hours, where, solo, my time unmolested, I embark on Jocelyn’s Office Hour Adventures. Usually, they’re pretty tame and entail things like:

–visiting Perez Hilton’s website to see if Katie Perry has worn a dress made out of cotton candy that then melted in the rain, and if not, did she at least visit MacArthur Park to see if someone left a cake out?;

–grading discussion posts in online classes, wherein I urge students, for the tri-millionth time, to stop using the word “penis” and start using the Shift key;

–throwing some handouts from 1993 into the recycling bin because that old article about the endangered spotted owl would be of more use if it were broken down and revamped into little cardboard “condo” trees that the few remaining owls could retire to;

–dropping for a few push-ups as I pretend to be G.I. Jocelyn, if, by G.I., we mean someone who can do five half-push-ups before weeping softly into her dogtags;

–taking a ballpoint and stabbing at my lunchtime orange because frick if I can get even one edge of a fingernail into the peel to get the thing started;

–calling Groom to see how many fried eggs Niblet required when he got off the kindergarten bus before he was restored enough to speak or act civilly;

–creating a new activity for freshman composition called “Writing a Good Introduction,” and, in it, categorizing introductions as “Happy Face Making” or “Sad Face Making” and then drawing stick figures of myself smiling or frowning. ‘Cuz this is college, Potsy, and that’s a little something we call academic discourse;

as happened this past week, in an extended adventure

–locking my office door in a fit of pique so I could tear off my Ladies Foundation Garment, which had undergone an unexpected transformation in the laundry, becoming twisted and angry in the dryer (not only had the fabric experienced a huge falling out with the underwire, but one particular hook seemed to have snagged onto a sweater during the tumbling, whereupon they wrassled and spatted until the hook was unbent, rendered a straightened, proud, sharp, pointed dagger in the swirling mists of Bounce and Relationships Gone Bad).

I had been unaware of Foundation Garment’s metamorphosis into a weapon when I had thrown it into my gym bag that morning; at the Y, when I was dressing post-workout and discovered the damage, I spent five minutes examining Tousled Foundation Garment and asking, gently, so as not to alarm it, “What queer kind of creature are you? And where is your head, dearling? What is this sharp little tail you trail behind you? Oh, it’s a hook pike! What a clever puss you are! Here, let’s try to right you, Puir Li’l Bra, so’s Jocelyn can wear you to work today.” I stroked it a little before packing my personal wreckage into Garment’s empty shells and making for campus. Once there, I weathered the constant stabbing in my back for a few hours like the stoic Finn that I am, but when I finally felt a trickle of blood flowing down my back, I tapped into my inner Irish and got feisty: I knew it was time to perform hook extraction surgery upon Foundation Garment.

And what more opportune time for such a procedure than my office hour?

Cut back to me locking my office door and disrobing as I tore off the offending stabber. I started in a thrifty frame of mind, wondering if I couldn’t salvage the thing. After all, if Congress is going to shove 789 billion dollars at the banks and CEO’s, shouldn’t I do my part to help our ailing economy, too, by, um, continuing to use what I already have so that I don’t have to go out and buy stuff? Doesn’t my reaction make as much sense as the government’s? They can throw around a lot of money, and then, because I don’t have any, I won’t.

Wanting to preserve Foundation Garment’s presence in my life, I sought to excise only the offending hook. Yanking with my Man Fingers didn’t work. Gnawing on it didn’t work (although it was rather a tasty afternoon snack, but ultimately, much like Demi Moore’s performance in St. Elmo’s Fire–or any other movie–it was more tease than fulfillment).

So I turned to the scissors.

Twenty seconds later, my strategy of Garment Preservation took a radical turn towards “I wonder if fabric can be composted?” I had forgotten, for a moment there, that fine motor skills are not my greatest gift. I excel, rather, at subject/verb agreement and slashing and pillaging. 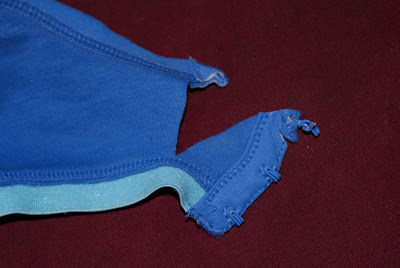 My bangs in 8th grade, after I decided to give myself a trim. They’ve almost grown back.

Having inflicted a mortal wound, I realized Garment had become unwearable. Ah, well, I only had to get through the rest of my office hour (maybe trying out a handstand against my file cabinet for kicks and giggles and the odd black eye); then I could head home, to a place where I’m known for a patented look we call the low-hang.

The universe being what it is, however…

You know what comes next.

A knock on the door,

followed by a plaintive,

“Jocelyn, I was just wondering if you could go over my thesis statement with me and tell me if I’m on the right track…”

Unbound, my breasts are well able to wield a pen.

office hours, slashing and burning of lingerie, what’s that flapping sound at the front of the classroom?