Win One for The Mommy

When I was about 25, I attended one of my mom’s college reunions with her. Beyond this being a sad, sad commentary on the state of my twenties (Problem #1: I spent most of that decade dating a guy in his forties who just wanted to stay home and watch Jeremy Brett as Sherlock Holmes and learn AutoCAD), there was a moment at the reunion that opened my eyes to the layering of hopes across generations.

At the reunion, a former classmate of my mom’s recounted her favorite memory of my mom during those college years in The Big City. As Jocelyn’s Mom stood on a corner one day at a bus stop, Former Classmate happened by and caught a glimpse of Mom passing the time in a Twyla Tharpian reverie, doing heel stretches and arm swings and deep lunges there on the sidewalk. Taking a modern dance class at college that semester, my mom was getting to taste an opportunity her childhood hadn’t provided. Every time she bent her elbow to ninety degrees of grace and movement there at the bus stop, she was reaching, albeit in angular fashion, beyond her upbringing.

There is no amazing finish to this anecdote, wherein she teamed up with Martha Graham and stunned the critics. Rather, after a semester of modern dance, my mom dropped out of the class during the second term. As she remembers now, “I had much other more serious stuff to do”–like trying that new invention of bread and tomato sauce that the teens of the ’50s were calling pizza pie.

Is it any wonder, then, that my childhood was aimed towards fulfilling her stunted interest in dance? My after-school hours for nine years were largely devoted to twice-weekly ballet and modern dance lessons, with the occasional jazz and tap thrown in. At the time, all I knew was that I liked it. Years later, at my mom’s reunion, hearing about how dance had entered her college life as a quick amuse bouche, I started to realize that I had been dancing for her, too.

That’s what we do when we raise kids, ja? We refract their achievements so that we’re bathed in that light, too.

Indeed, I can admit that I am a refractive, reactive parent. Many of my decisions about my kids are guided by my own childhood–namely what it lacked. Certainly, I want them to taste the experiences I enjoyed, such as playing music, jumping off a diving board, and eating dirt. But I also want their lives to compensate for what I didn’t do (play soccer) or have (a straight boyfriend).

This doesn’t mean I need for them to take calculus because I wimped out into the alernate honors math section in high school, a class called, somehow sneeringly, “College Algebra.” The wisdom of that decision has been born out over time. I didn’t need to take calc. They don’t need calc. Calc makes less sense than Ashton Kutcher constantly sending out life updates on Twitter to masses of strangers. Of course, if my kids do take calculus and shine at it, I will co-opt their genius, claiming that I always was good at math (for an English major who gets bewildered by sales tax).

But here’s an example of how I do put my hopes on my kids: I grew up in Montana, an hour away from Red Lodge, which is an awesome downhill ski area. I do not downhill ski. Once, when I was ten, my mom pulled my sister and me from school for a day to take us to Red Lodge, noting that if we were growing up in Montana, we should have a chance at understanding some of the words coming out of our peers’ mouths, like “bunny hill,” “carving,” and “In the name of Sony Bono, get the St. Bernard and the brandy; I have a torn ACL.”

So we had that one lesson. Seems it takes more than the one lesson. Today, in all my complex well-roundedness, I can’t downhill. By extension, you might rightly surmise that I don’t snowboard (I’m not closing the book on the possibility of this one yet, though; I may have a Shreddy Betty persona lurking inside me somewhere, especially since I look cute in braids, in a way that would make all the 18-year-olds on the hill come up to me and slur, “Hey, Old Lady, nice braids. Can I help you up?”).

Guess what? I really want my kids to downhill ski and snowboard. I’m just that simple. Me no can do. Me would like to do. Ergo, they should do. Then I can pretend that I, too, on some level, do.

This weekend was lovely in that way, as it provided some new vistas for my kids, things I have never done but would have liked (still would like) to do. For one, I don’t know how to knit (with yarn, that is; I’m actually great at weaving together a web of lies and deception that would leave Alexis Carrington begging for mercy. Just to, you know, toss out the most uncalled-for 1980’s reference possible). Fortuitously, my kids say they would like to knit. Mommy can live out this dream through them! Wrapped in a heap of scarves! That look like they were knitted by a 6-year-old! Because they were!

The sticking point (in addition to irrelevant ’80s references, I excel at unclever puns, by the way) about knitting at their ages is the needles. Small hands plus short patience make the needles really frustrating. We had, however, seen “finger knitting” being done by youngish kids. So this weekend, after Groom watched a bunch of YouTube videos explaining finger knitting, the kids have become passionate knitters: 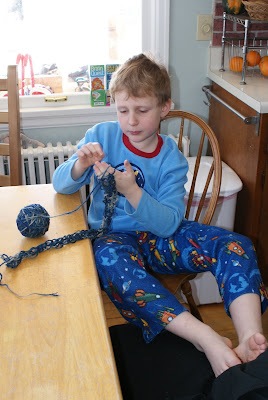 Niblet declared, “This is my favooowite thing I’ve ever done in my whole life.” When I challenged this idea, asking if finger knitting outranked visiting Legoland, he would only answer, “I could finger knit while I’m at Legoland next time, like, on the rides, and then it would be everything good all at once.” 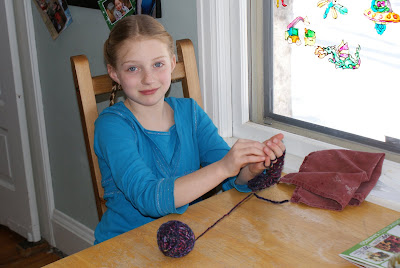 Girl stuffed the ball of yarn in her pocket and announced, “I’m so good at this, I’m going to do it while I pace.”

Even more gloriously, Girl had the chance this weekend to do something else I’ve never done. Duluth has a small airport at the end of Park Point, which is the world’s largest sandbar (next time you don’t have sand rubbing you raw in your privates, you can thank us for tucking it all away into one secure location). This airport was offering free rides in wee planes over Lake Superior. Because Girl is nothing if not the embodiment of confident pragmatism, she and her best friend gave us a casual wave and hopped in, taking only a moment to strap on seat belts and headsets: 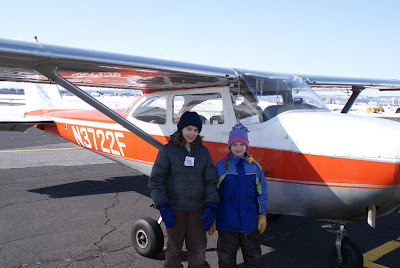 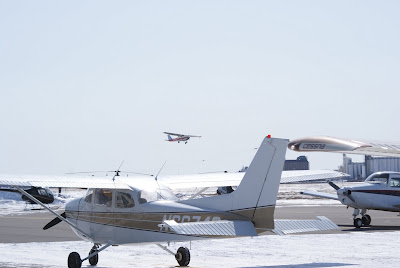 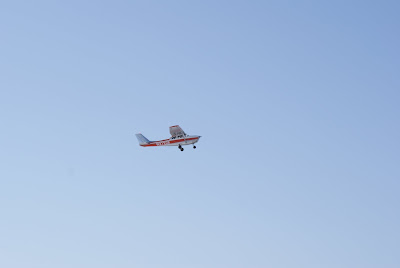 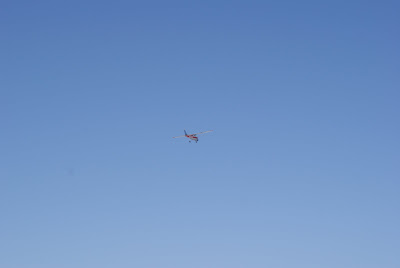 Those of us on the ground are left gasping in awe and joy at their magnificence. Ultimately, it is a singular pleasure to be a part of the audience.

adventures, airplanes, come fly away with me, dreams of our fathers, finger knitting

23 responses to “Win One for The Mommy”