I Can Help You Birth Your Baby, But Please Don’t Ask Me to File Your Taxes

From the teaching life:

I have had a student sit in my office and sob about how she was stuck living with her no-account boyfriend who used their money for anything but rent, who hated the fact that she’d chosen to go to college, who sabotaged her every effort to change her life. However, she sniffed as she wiped mascara off her cheeks, she had no money to move out and was feeling too proud to call her parents and ask for help. During all this, I handed over Kleenex after Kleenex, patted her on the shoulders, and told her, from my perspective as a parent, that it would be an honor for my children to come to me with their pain and allow me to be of help in escaping negative life situations. That afternoon, she left my office, wrote her parents a letter, and they immediately floated her a loan for her own apartment. They also helped her pay for her textbooks and got her a new fuel pump in her car. Less than a day later, she emailed me and thanked me for acting as a “mother figure” when she needed on. Since I’m pretty sure I’m only 24, that thank you was more sobering than uplifting, but I took her point. Last week, she emailed me from Mexico, where she’s on vacation. She’s very sorry she forgot to take the quiz.

I have had a student turn in a three-page essay that was one continuous sentence, without a whit of punctuation in it until the bottom of page three, where a lone period reared up. When I returned the paper to the student with the comment of, “I can’t grade this until you show me some sentence boundaries and add in the necessary punctuation,” he responded with a bleary, “I don’t know what you’re talking about.”

I have had a student come into my office for a required one-on-one conference and tell me, dry-eyed, about how he and his wife had become addicted to meth the year before, after the whole family was involved in a car crash, in which their 3-year-old son was killed. On the day of our meeting, this student had been clean for six months and was trying to turn his life around, despite his wife’s continued addiction. It was all I could do not to gather him unto my bosom and rock him like a baby. Because he was 26, and because I hardly knew him, that would have been infinitely creepy, though, so I simply told him, repeatedly, “I don’t have words for how much I respect you.”

I have had a student stand in my office for 45 minutes, monologuing like an evil genius, about how he and his girlfriend and their baby were going to get off welfare so they could afford a better car. When he finally wrapped up and left, one of my colleagues (it was a shared office space) called out across the room, “You are a saint. I was ready to kill him after 10 minutes.”

I have had a student write a series of journals throughout the semester that capitalized upon the liberties of “freewriting” to the point that every entry contained the words “I wake up every day with morning wood” or “Being hung like a donkey is hard work…” No, son: grading your writing was hard work.

I have had a student who, as part of her efforts to leave a significant position in organized gang life, was forced to submit to ritualized torture sessions periodically. In the face of this, she never missed a class but rather limped in after her weekends “away” and handed me her homework, no excuses.

I have had a student who worked as a stripper to pay her tuition. She managed to get herself off crack and stay off it, even when male patrons insulted her to the core. When she was raped by a former boyfriend, however, her life began a slow descent into panic, and she fought retain a kernel of her self through writing.

I have had a student who, with two tours of Iraq under her belt, just wanted to be a firefighter. As someone who lived in an apartment, she begged to come over and do yard work for me, so she could wear a 50-pound pack as she shoveled and, thusly, get into shape for the CPAT, a physical fitness test required by firefighting departments. After priming herself all summer, she came up short of the $250 required to take the test as part of the interview, so she now works part-time making soup at a restaurant in town and part-time straightening merchandise at Target.

I have had Mindy.

I have had a student who stayed after class to tell me she knew I was treating her differently because I was white, and she was black.

I have had a student stay after class to thank me for never making him feel like the only black person in a room full of whites.

I have had a student from China who, shaky in her English skills, had someone write out her final exam essay for her ahead of time; she then memorized that draft and typed it up, straight out of her head, during the final exam period.

I have had a student (raised as part of the Christian Coalition in Colorado Springs) tell me I could save myself by reading John 3:16 (at which point I quoted it to him), that AIDS was only inflicted upon those who deserve it, and that he had these feelings inside of him that made him feel unclean.

I have had a student come to my office and ask me if I could give her a passing grade, despite her lack of attendance or work submitted, because she was bipolar.

I have had a bipolar student—someone who never missed an assignment or class—meet me at my office door at 7:55 a.m., quivering, and announce, “I’m tweaking right now. I’m not okay. I think I’m going to hurt myself. Is there anyone who can help me?” Although 24 other students awaited me in the classroom, I assured her we had more than enough time to get her to a counselor.

I have had 90 papers submitted on the same day by students who then inquire, “Will we get them back next time?”

I have had a student who, every time I walked past his desk, would slip me a note. Usually they read something like, “I want to become a lounge performer in Las Vegas.”

I have had a beloved student die.

I have had her daughter, also a student, call me and bawl and bawl, telling me, “My mom loved you so much. I need you to come stand by me at the memorial.”

I have had hundreds of students shuffle into the classroom wearing empty Kleenex boxes on their feet as shoes—for extra credit. Long story.

I have had a colleague snarl at me in a departmental meeting, “I’ve been teaching for twenty years, and if the administration thinks I’m going to hand over my teaching materials to a young pup like you, they’ve got another thing coming.”

I have had a dean give me an evaluation so passive-aggressive that I had to go back to my office after it and cry for half an hour.
——————-

Clearly, I have a job that is often emotional and taxing and vexing.

How can it be, then, that the most challenging thing I’ve ever encountered in my career 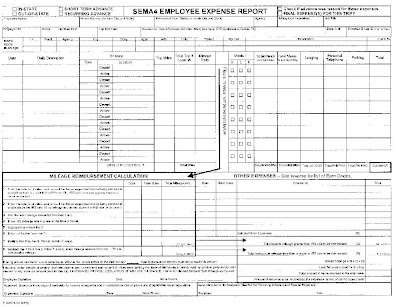 has been filling out an expense report?

25 responses to “I Can Help You Birth Your Baby, But Please Don’t Ask Me to File Your Taxes”