Clearly, Because This is Part III of What Could Have Been a Two-Sentence Story, The Director of This Overblown Epic is Kevin Costner

Thus, from then on, I couldn’t sleep on the couch. I couldn’t stay on the main floor after Groom went up to bed. Part of our marriage vows is that he will never leave me alone in the presence—real or implied—of a rodent, just as I will never leave him alone in the presence of a woman wearing a wig, a polyester track suit and chunky gold jewelry who has just squawked, “I tell you this, hand to heart: you’ve never experienced delicious dining until you’ve been on a Disney cruise.”

Sticking to the agreement, every night, he toted me up the stairs with him at 10:30 p.m., right about when I was waking up for the day…and when my bladder was ready to do some serious and repeated unloading.

You know me not at all if you doubt that I actually tried taking the screen off the window in our bedroom, so that I could hang my rear out the hole and pee down the front of the house during the night time hours. Unfortunately, the house had been built in 1892, when windows were designed upon a presumption of Outhouse Existence and People Who Are Not Damn Pampered Wussies. So no luck. 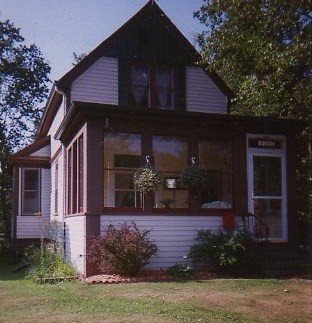 Note the distinct lack of urine trickling out the upstairs window.

I also tried to get my substantial posterior angled so that I could use the Girl’s widdle portable potty up in the bedroom. Woefully, after it got snagged on my thigh that one time and drenched me with an outpouring of just-released still-warms, I abandoned that strategy.

The solution came in the form of one of our finest modern inventions (provided you are willing to embrace the notion that chemicals and toxins constantly leeching into your food constitutes a fine example of ingenuity): Tupperware.

We had a good-sized tupperware bowl, just waiting to be initiated as Chamber Pot of the 21st Century.

Tuppy and I got tight there, for a month or so. Tuppy ruled. Tuppy cradled. Tuppy caught. Tuppy also challenged my husband’s love for me, as he’d wake up every morning only to be greeted with the impressive inches of my night’s work, right there, next to the bed. I’d blanch with him and grumble, “Yea, I know. But I need you to walk with me as I carry this down to the bathroom to dump it out. Rodents aren’t afraid of urine, even that of a woman as powerful as I. Just, er, look up at the ceiling as you walk down the stairs. That’s not at all dangerous. Maybe whistle a little.”

Tuppy and I continued bonding for several weeks. During this time, Groom and I came to a gradual acceptance that the scat we were tracking went beyond shrew or vole in size and heft. This hunch became a certainty one evening when, having braved an extra half hour on the couch by myself, I glanced towards the kitchen and saw a large blur, somewhat like the Tasmanian Devil, whirring across the doorway.

Screaming, I ran up the stairs, planted my foot firmly into Tuppy, who sat on the floor, awaiting my nocturnal visits, and hobbled frantically over Groom, who was reading in the bed. “There’s…an…enormous…horrifying…beast…dancing…with bloodlust in its eyes…calling on all dark magic…in the kitchen!” I managed to whoof out.

Naturally, when Groom went down to look, the kitchen was all innocence and light. He found nothing.

Except a spoon and a bowl of ice cream, which he was savoring entirely too casually upon his return to the bedroom–where I sat, a quaking mass of raw nerves. Licking fudge off his upper lip, he remarked, “Well. So. I’ve been thinking about it. And I’d say we should get a live-squirrel trap. We need something big for what we’re dealing with.”

“No,” he responded, digging into the bowl for another bite. “I think we have a rat.”

Heck, yea, there’s a Part IV coming. Truth be told, I’m in manic grading week, looking ahead to final exams, and so I’m drawing out this story in an attempt to get over the end-of-semester hump.

Just wait until the end of next fall semester, when I plan to turn a story about a stubbed toe into a seven-part series of posts that detail in 97 sentences every aspect of the moment I shouted, “Oh, that really hurt!”

rodents cramping my style, the pains of pregnancy, tupperware as savior

23 responses to “Clearly, Because This is Part III of What Could Have Been a Two-Sentence Story, The Director of This Overblown Epic is Kevin Costner”