In the End, Only Quentin Tarantino Could Do It Justice: Part IV

After two minutes, Groom finally put down his bowl of ice cream and meandered over to my prone form. Holding his spoon up to my mouth and noting that it fogged up with my breath, he returned to his snack and enjoyed the unaccustomed silence.

The next day, I came to. By then, Groomeo had set up a borrowed squirrel trap near Banana Alley in our kitchen and also bought a rat trap, which he set in the oven drawer.

Occasionally, over the next few days, he would stand at the back kitchen door and wave out to me in the little lean-to I had pitched in out in the raspberry patch. It was a small space, certainly, but it provided enough room for me, a sleeping bag, and Tuppy–not that I needed Tuppy, what with the great out of doors known as God’s Toilet all around me, but I’d brought my little chamber pot pal along for company and sanity saving, a la Tom Hanks and Wilson in CASTAWAY.

My, but Tuppy was cute once I drew a face on him. I spent many an hour back there amongst the raspberries, marveling at the clarity of his complexion, rubbing his back, asking him about his childhood in the factory.

Oh, all right, I didn’t really move out to the raspberry patch, but I sure as Stuart Little shadowed Groom more tightly than usual after the RAT pronouncement—no mean feat, since I always spend a fair amount of time latched onto his skin. It is, after all, very, very soft.

Indeed, we had a Velcro marriage for a few weeks, as we waited for the traps to spring and my soul to be released from bondage. 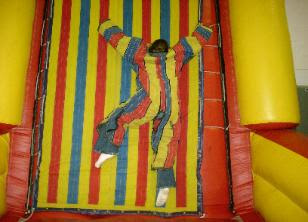 A visual metaphor for the marriage during this time.

The live trap proved no help, as the beast in the kitchen was small enough to get inside to eat the peanut butter…yet big enough to keep the trap door from snapping closed behind him as he ate.

How did I know he was male, you ask? Did I ever undertake any gender-typing examination, you wonder?

Effing screaming hellbats of yore, no I did not. However, I did find out later that he was actually very scrawny. And, in my experience (which includes the time I glanced at a jar of Jif and gained four pounds), anything that can eat loads of peanut butter every night and remain underweight is unquestionably male.

Eventually, then, we gave up on the live squirrel trap. It was up to the rat trap to bring home the glory and allow a foot of physical space to come between Groom and me. That “tight all the time” business was a bit too middle school even for my juvenile sensibility. We’d be walking around with our hands slipped into the back pockets of each other’s Levi 501’s, and suddenly I’d be possessed with the urge to yell out, randomly, “Hey, Mr. Murphy! That was a really tough pop quiz you gave in geometry yesterday!!”

One night, as we lay sleeping upstairs, we heard a loud clank down in the kitchen. Sitting up simultaneously, due to the Velcro, we managed to look at each other in a fashion both bleary and alarmed.

Is it Santa? I wondered to myself, hopefully. I did need new socks.

Alas, no. The sound had been that of a rat trap snapping shut inside an oven drawer. Peeling away the Velcro, I helpfully shoved Groom out of the bed, murmuring, “Go get ‘em, Tiger. And don’t forget to wear gloves when you deal with it. The Plague has been awaiting its chance to resurge.”

Two minutes later, Groom’s feet trudged back up the stairs, and he climbed back into bed with a “Rat bastard sprang the trap but got away.”

How very O.J. Simpson of him.

True to fashion, Groom was snoring thirty seconds later. To my credit, it only took me two more hours before I stopped listening for the sound of tiny scrabbling feet on the stair case.

The cool thing about rats, though, is that they’re slow learners.

Two nights later, we heard the same metallic clank; I gave the same shove; but this time, Groom was gone for some time.

In fact, I was listening to the third song sung by Frank Sinatra, Dean Martin, and Joey Bishop by the time he returned.

“Well,” he said, coming into the bedroom. “That was really gross.”

Because Groom is both of Norwegian extraction and an emergency First Responder, he doesn’t shake easily, I realized immediately that the fewer details I knew, the better the rest of my life would be. “So, um, it’s dead?”

“Yea. And it was gross.” He actually shuddered.

“It was ginormous, right, because how could it be small if it had all the world’s darkness powered by universal energies of malevolence and then packed into one body?” I needed to know.

“No, actually it was scrawny.” Despite the peanut butter. “But long.” Like a pole vaulter.

“Where’d you put it?” I asked, needing to know where not to look.

Was it in the dishwasher, then? Perhaps the washing machine?

And it was. The only remnants of that night, in fact, are memories of my fear and my love of Tuppy, who still sleeps under my side of the bed

…and the fact that I can never see Groom in only his boxers and a pair of gardening gloves without having an adrenaline surge.

But that’s a whole ‘nother story.

husbands as savior, rat bastards, the injustice of peanut butter, tupperware as savior

24 responses to “In the End, Only Quentin Tarantino Could Do It Justice: Part IV”