He’s Making a List and Checking It Twice: For Only With Such Careful Reviewal Can He Be Certain No One Named ‘Pedro’ Gets a Train 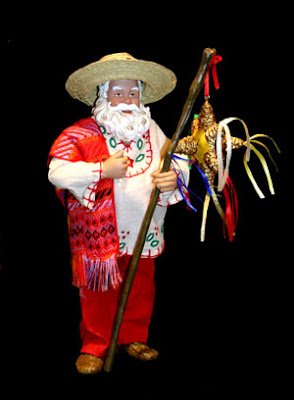 “That’ll be $1.50,” announced the parking lot attendant from inside his air-conditioned box. Eyes twinkling, cheeks rosy, beard fluffy, he followed up with a jolly, “So…what’s new at the zoo?”

It was hard not to grin back at this Santa Claus look-alike, especially because I haven’t exactly been a good girl this year, but I still want a present in December (unremitting greed being one of the myriad faults keeping me off the Good Girl List)–and so it suddenly struck me that a huge, toothy grin might up my chances at getting that spendy hairbrush I’ve been pining after for a decade.

My lips pulled back to expose every last molar, I answered him. “Well, my mom is visiting from California, so we have that going on.”

Santa’s internal sleigh dipped a bit, and his jovial manner faded. “You’re not from California, are you?”

“Oh, no,” I explained. “I grew up in Montana, but a few years ago my mom moved to California–Riverside, outside of L.A..”

“And does she actually like it?” Santa wondered, still looking as though he’d dandled one too-many whiny tots on his lap that day, including an ailing lad named Patrick who’d asked for a Transformer and then released his bowels directly onto red velvet pants and coal-colored boots.

“She LOVES it! I know, for me, it would be too hot, and the sheer number of people would be frustrating, especially with the driving. But it makes her really happy at this stage in her life.”

Swiping distractedly at his leg, Santa Attendant weighed in, “Well, California’s not for me, and not just because of the Mexicans, either.”

As my brain absorbed his remark, a feeing started burbling up inside of me…a feeling that I wasn’t going to make the Good Girl List this year. Again. My upstart mouth was starting to form the words, “Is it ‘the Asians,’ then?” when I looked at the line of cars behind me, listened to my stomach growl, looked at his 78-year-old face–wrinkles worn into the patterns of a lifetime–and decided to pay the toll and get home to the cold sugar snap peas that awaited me in the refrigerator.

Handing over the dollar bills, I did assure him, however, “Well, it definitely seems like you’ve found your perfect place, right where you are.”

…locked inside a small, dark, dingey room–a place with no horizon, where the air doesn’t move, where the vividness of human traffic streams by, never touching you, on its way

out into the light.

21 responses to “He’s Making a List and Checking It Twice: For Only With Such Careful Reviewal Can He Be Certain No One Named ‘Pedro’ Gets a Train”