Obligatory Kitchen Remodel Update, To Satisfy My Sister, If No One Else

The notion of remodeling our kitchen first took root five years ago (namely, the day we moved in to our current house and recoiled in horror at the dark, run-downedness of that room…which, strangely, implies moving-day was the first time I ever spied the kitchen–as though I hadn’t known the previous owners, eaten dinner there, done several walk-throughs, had the place inspected, and then, finally, moved in. Watershed moment on this blog: I’m a big liar through implication), and, since then, we’ve hung in there through dying appliances and floor tiles peeling up under our feet. Finally, though, finally, about six months ago, we saw the light at the end of a financial windfall (incidentally, it occurs to me at this juncture that not only do I love to mix metaphors; I also wish I’d had twins and named them Watershed and Windfall), and started moving ahead with plans to change up that sad drag of a room, the space where, nevertheless, we spent most of our time.

Here’s another “incidentally”: that last sentence has 72 words in it, so if you need to take a break right now and go pour a shot of vodka, I totally understand.

Oh, you back now? Wipe your mouth with the back of your hand, and then we’ll continue. You get a little sloppy when you drink, you know.

In a future post, I’ll summarize how the funding for this venture came to us, but for now, let me summarize the process of the remodel:

About a year and a half ago, we interviewed possible companies/architects. Nothing felt perfect. Good news: we had no money anyways, so hahahahahahahaha on the whole idea.

About six months ago, we saw first glimmer of a financial payout that would allow the remodel to happen. At that point, we met with an architect and project manager from a local cooperative company named Builders’ Commonwealth. When we hedged a quiet, “We were hoping for kind of an Arts & Crafts kitchen that’s also modernized,” and the project manager jumped in, gesturing to the architect, with, “But that’s Hugh’s speciality!” we were hooked. Because this company is a cooperative, there is no hierarchy, and the administrative positions rotate throughout the workers. This year, a furniture builder named Thad is president. He has an earring. The vice-president is a Lead Construction guy named Barry who, like me, is profoundly not a morning person, who appreciates quality coffee, and who laughed heartily at my quip about the laundry sink I grew up with when I reminisced, “Oh, man, I gave myself many a bad home perm in that thing.”

The thing about this company is that each guy is personally invested, and each guy is wayyyyy into craftsmanship. We know our cabinetmaker by name. He is Jason. He is revered by his co-workers, who wish and hope that he would mess up a little, so they could score some of his “unusable” work. In fact, one of our construction guys, Sam, still can’t believe he once scored some cabinet fronts made by Jason–the stain was too dark to suit the clients, so someone had to take them. And then hug them tightly for years afterwards. And maybe occasionally lick them.

Anyhow, I rather dreaded the influx of workers into our house, but they have made it easy. I would have any one of them over to dinner. At that dinner, I would insist they have dessert. It would be an espresso granita, with whipped cream. I would give them two dollops.

So we have had gracious, invested, talented people in our house since June 9th. Despite how much I love them, they could be done already. It’s our kitchen, after all and fer crissakes. I’m ready no to wash dishes in the bath tub or over and neighbors’ houses. I’m ready to bake Snickerdoodles. I’m ready to be able to find the molasses and my really big mug that can hold a well-iced latte.

Things were going along swimmingly…up until Builders’ Commonwealth got The Call.

About an upcoming episode of Extreme Home Makeover.

Which they had been selected to help orchestrate–you know, as the builders.

Our fellas had not put in a bid for this, actually. The network just knew what region the show would be visiting, had a list of five potential families, and then read up on contractors in the area. They, rightly, thought Builders’ was the best choice. Honored, excited, flabbergasted, Builders’ agreed to do the job.

The details that have emerged since then are:

The home build for a needy local family will start August 3rd (smack dab in the middle of our ongoing project, naturally).

The ABC home build is done completely with volunteer labor, including the manhours from the entire company of Builders’ Commonwealth

The local contractors have to hit up their vendors for materials, too; the network provides only liasion work and logistics. Oh, and Ty Pennington’s highlights.

As loyal, paying clients of Builders’, we may be getting VIP passes…to, um…the street of the home build? Or to the tent that has danishes? Or, best yet, to the moment the bus rolls away from the front of the new house?

Because this is such an intense project, lasting 120 hours from pouring the slab to rolling away the bus, all the contractors have had to pull back from their loyal, paying clients’ projects over the last few weeks, just to pre-build things for the Extreme Home Makeover show.

Despite having split focus, the fine fellows at Builders’ have done their best to leave us in relatively good shape for the next week, when our work site will fall silent.

To their credit, the place is coming together nicely: 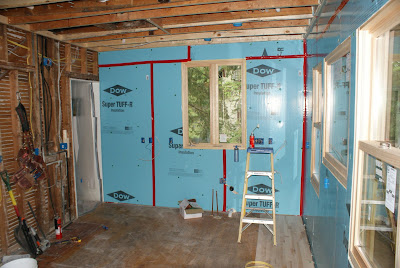 This is what the kitchen looked like a couple of weeks ago, after the insulation went it. Turns out we had NO insulation before. You know we’re true Northerners since we never noticed the draft. 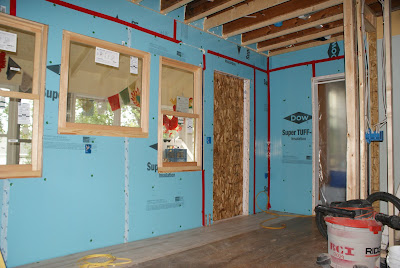 Does a part of you wish we’d decided to keep the walls sky blue? 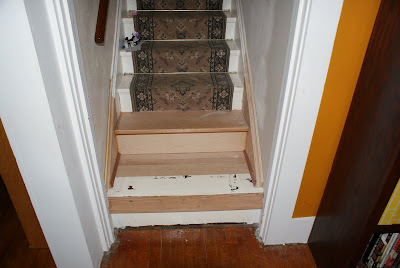 An extraneous door into the kitchen was sealed off, and the bottom stairs that turned into that now-non-existent door were straightened. Remodel domino effect #1: we get to pull up the old runner, paint the stairs, and get a new runner. 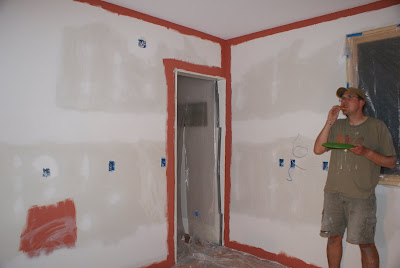 A hint of the color we did choose…clearly not sky blue. Look how hungry Groom gets when he paints and uses all those man muscles. 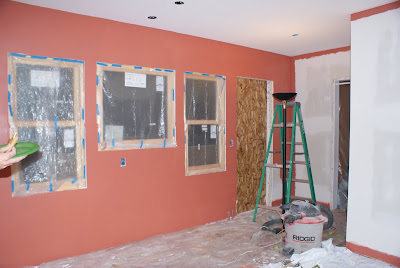 Don’t you love the plywood “back door” we’ve been living with? 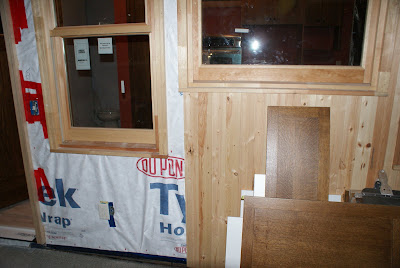 What with putting in new windows, all the beadboard on the back porch had to come down, and new is being put in. Remodel domino effect #2: we get to repaint the back porch. Oh, and since the carpet on the porch has been trashed, we have the opportunity to get new carpet. 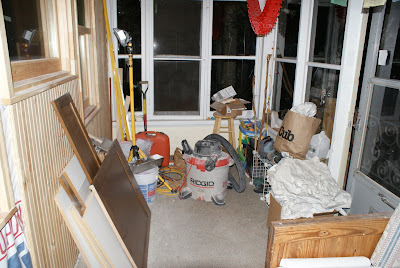 This is where we usually sit and read books and eat lunch. Not this summer. 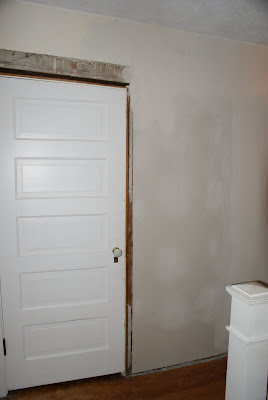 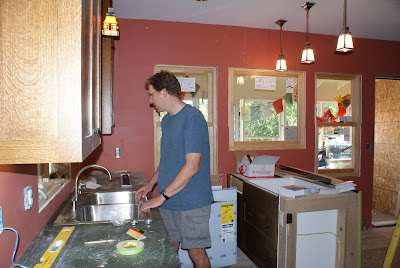 And then, this past week, it all started to come together. Cabinet installation began. We got a sink. We got a dishwasher. The oven works. It’s convection. We have no earthly idea how to use it. 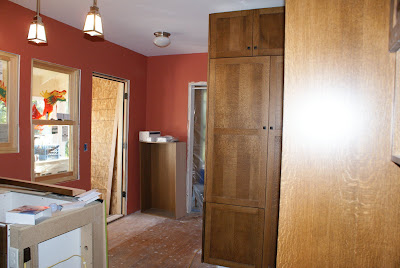 The tall door there is a pantry and also holds recycling bins that pull out. You understand why someone might want to lick that wood, don’t you? 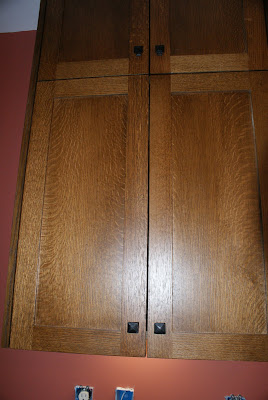 Or just lay on it, all night long, whispering sweet nothings into its iron pyramid knobs? Look how much lights don’t suck! 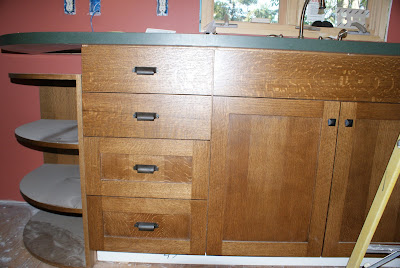 When I look at these, I feel like I’m starring in a one-hour drama that depicts an idealized version of my life. 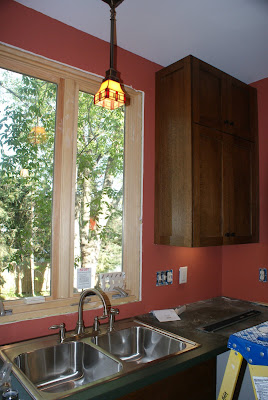 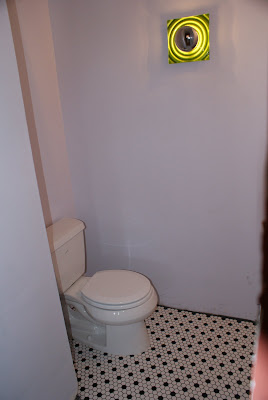 Did I forget to mention the half-bath? Sweet Johnny Willywacker, but it’s a whole new world of urination. 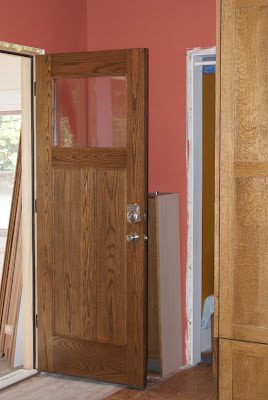 Yesterday…Saturday…two days before they start working full-time on the Extreme Home Makeover, a couple of the guys came over and installed our new back door. No more plywood. Even better, the door has a keypad that holds up to 19 entry codes, so we have gone Full International Spy 007. Paco had to meditate long and hard before coming up with his code of choice; the process involved his retiring to the couch with a tin of Yu-Gi-Oh trading cards for 15 minutes and studying all the monsters’ various attack powers. My process involved babbling, “Um, I dunno what I’ll be able to remember. How old am I again? Could we use that? A lot? Over and over?”

As you can tell, if we do score VIP passes to be in the crowd scene when the bus pulls away and that lucky family’s new home is revealed to them, I won’t be hard to spot. Look for the really bewildered woman who seems not to know her own age or where the molasses are.

cabinets I could eat, kitchen remodel, promise getting fulfilled

24 responses to “Obligatory Kitchen Remodel Update, To Satisfy My Sister, If No One Else”