If you were able to find a scale the size of Gary, Indiana, you could hoist upon it all of the toys, puzzles, and games in our house and weigh ’em–at which point, even though you weren’t actually weighing the toys ON the town of Gary, Indiana, I’m pretty sure, in a moment of transcendent empathy, the the nice little town of Gary, Indiana, would explode with a loud pop, just from sensing that a scale its size somewhere else on the planet was holding all that kid crap and measuring its heft.

In so many ways, not the least of which is that such an explosion would signal the end of Mayor Rudy Clay (who, based on what I see on his Website, is teeming with pos-i-tiv-ity), this would be a tragedy. Maybe, at least for the mayor’s sake, it would be prudent for me to consider cutting back on the piles and piles of child amusements that fill our house so that no scale anywhere ever has to blow up–and so that all mayors, no matter the burg, can continue planning back-to-school picnics for their cities.

If I had to whittle it back to a mere 5 pounds of toy-ish stuff, I know one thing I’d keep: the easel.

Our Girl has used it for years when she is acting as teacher to a class of 26 babydolls; we have used it to pose a “Question of the Day”; both kids have created paintings of robots and sunflowers on it; and, in a pinch, it’s a helluva coathook. I also sometimes prop myself against it when I get tipsy.

Transformers, stuffed animals, and board games alike know the Sheriff Is In Town when Easel stops by. Easel kicks toy ass (including that donkey from SHREK).

A few weeks ago, Easel stopped by the bathroom–on a campaign to intimidate the bathtub toys, metehinks, which live in a bucket under the towels–and has been hanging out there since.

Can I just say there are few things more fun than an easel in the bathroom? For one thing, it negates the need for magazines and the crossword puzzle. Because? Punky? You can spend a lot of toilet time creating art when Easel is hovering nearby.

It’s a venue for a whole new kind of toilet humor.

Even better, since Paco is waaaaaaaaaaay into reading comic books and graphic novels, we can pretend we’re upping his literacy by drawing cartoons on Easel that the lad then has to decipher while he, as we say, “makes a pooper.”

In recent days, we’ve had a variety of panels appear and be wiped away (simultaneous wiping: the hidden bonus of a whiteboard in the bathroom!), including my personal favorite, an alien guy named Brainiac who can’t figure out how to eat chicken nuggets, what with him being only a brain on a body and having no mouth.

However, I’m also really enjoying Groom’s latest creation, “The (mis)Adventures of Pyramid Man.” First, Pyramid Man showed up like this: 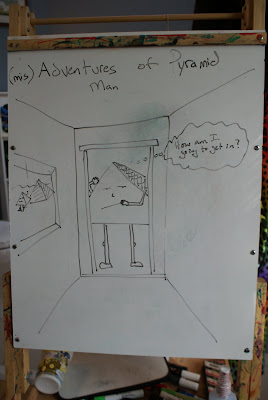 His triangular shape makes him wonder, “How am I going to get in?”

Today, I switched up Pyramid Man’s house and thoughts, though, which delighted Paco during his early-morning toilet ministrations. 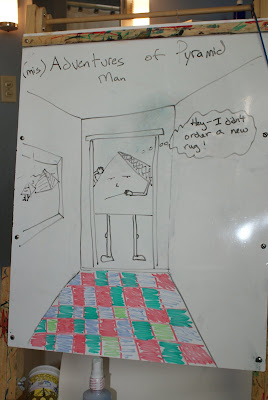 As Paco noted while his undies and shorts fell to a puddle around his ankles, “Pyramid Man can’t even get inside to call someone and tell them they brought the carpet to the wrong house!”

Clearly, Easel will continue to amuse us as we brush, floss, and wipe. I invite you now into our bathroom, so long as you’re willing to ignore the grey ring running around the inside of the tub: if the marker were in your hand, what scenario would vex Pyramid Man next?