A Guest Post from My Pal Jim Who Grew Up in Wisconsin, Spent Many Years in Minnesota, and Now Lives in Palm Springs

So, yes, the post below is the latest pinch hitting by my friend, Jim; in past times, he’s also written about performing in GREASE and seeing Elizabeth Taylor. In this latest, he considers his move to California a couple of years back. Enjoy his musings, as I jet off to Colorado this weekend to help my sister organize her clutter! (I’ve been practicing a severe expression as I announce, “You don’t need that. You don’t need that either. Get rid of that. Take that one to the Goodwill. Burn that.”)

My only addition to Jim’s post are a few quotes about the phenomenon that is Governor Schwarzenegger’s state:

“As one went to Europe to see the living past, so one must visit Southern California to observe the future.”–Alison Lurie

“There is science, logic, reason; there is thought verified by experience. And then there is California.”–Edward Abbey

“Southern California, where the American Dream came too true”–Lawrence Ferlinghetti
———————————————–

“A View From the Porch”

It’s been two years and three months since I arrived in the desert. High time I wrote some thoughts about living here.

I’m sitting on what I’m going to start calling my “Writing Porch.” It’s one of three patios at my apartment. And I’m sitting in the sun, laptop on the table, and the sun is so bright the apple on the other side of the screen is showing through. Do you think I’ll write more if I call it the Writing Porch? Michael Chabon has a writing studio in his back yard. Just sayin’.

I’ve been such a crank lately, bitching over cocktails about everything from problems at work to my dismal love life. (No offense to the two guys who have dated me this month; not talking about you.) I better get some thoughts in about what is good about living in this beautiful area.

For the beauty of it, I will just give you this photograph. 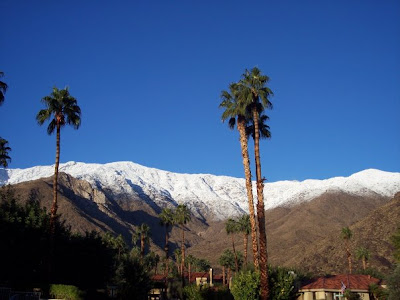 There is little more beautiful than the view of snow from a distance.

What’s really insane, in the way of ET having a frontal lobotomy against her wishes, is this place in the fracking summer. Alex: “June, July, and August.” Jim: “What are the best three reasons to be a teacher?” Not so much here. Three to four months of heat in the 120 degree range. It’s a dry heat my mother’s aunt! An oven’s an oven, sweeties.

Having lived in extreme cold, though, I can tell you this: extreme heat is more bearable. You can sit still on a hundred-degree day if you’re in the shade and drink a nice shandy. Outside. Then you can go into your air-conditioned apartment and watch Keith Olberman. Can’t do that in the tundra of Wisconsin, Minnesota, or Maine (other places I’ve live) when it’s 30 below. (Okay, you can watch Keith if you have cable, a hot toddy, and a snuggie.)

It’s no use, you northerners, saying how much you like the cold or value the Change of Seasons. You might as well say you enjoy the Change of Life. My stalwart brother even posted on Facebook the other day the opening line to “California Dreamin’”: “All the leaves are brown, and the sky is gray.” I couldn’t help but reply that he knew where and how he could be safe and warm. 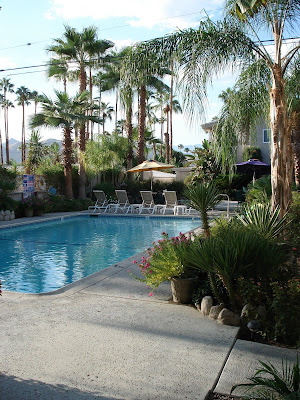 The view from my Writing Porch.

On the other hand is the bitching. A couple of years before I moved here, a friend talked about weekending in Palm Springs. Well, talked is a bit generous. He ranted: “There’s nothing to do there! There’s NOTHING to do there.” And he’s pretty much right. Sure, there’s hiking in the mountains, drinking in the bars. And tennis for those who play. And that Scottish game that takes up all that lovely parkland. But nightlife? Forget it. One museum: good. Movies: good. International Film Festival: two weeks in January.

There’s no one under sixty who is single (see above re: love life). Why even yesterday there was a rather fetching guy my age getting his haircut next to me. “I think he has a partner,” says my Guy with Scissors. Natch.

So we’re saved from boredom by our proximity to Los Angeles and the coast.

But Jeeves! I think my laptop’s overheating.

Epilogue: just this week, Jim decided to start his own blog, Long Slow Distance. If you have a minute, please go visit him and his post at their new crib:

guest blogger, not only can’t you go home again but you don’t really want to, Palm Springs

9 responses to “A Guest Post from My Pal Jim Who Grew Up in Wisconsin, Spent Many Years in Minnesota, and Now Lives in Palm Springs”