There is a National Association of Professional Organizers.

In the Denver area, a professional organizer makes $75/hour.

My sister, overwhelmed and anxious in the face of her stacks of belongings, uses a professional organizer. In fact, she’s committed to drawing upon the inheritance from our dad’s and grandmother’s estates to pay this organizer until the job is done.

The thing about being overwhelmed by stacks of crap is that the feeling doesn’t go away easily or for pay, necessarily. At the very least, we might need a great aunt to die in the next few years. See, my sister’s garage holds her teaching materials. And she’s taught for more than twenty years, at four different grade levels, in four different countries. Plus, she seriously loves her some kiddie lit.

Friends, there are milk crates and shelving units and big plastic tubs in my sister’s garage. There is the intention of organization. But it ain’t there yet.

In fact, we might need all remaining relations to kick off before Kirsten’s garage is entirely inventoried and ordered. It would help if those relations could please get richer before they die.

Despite hiring a personal organizer, my sister has been needing further outside assistance. Cleverly, she did the math (carrying the one) and realized it would be cheaper to fly me to Denver than to pay her organizer for equivalent hours. With the plan that I’d come for a weekend and help her get organized, she bought me a ticket.

Just to double the oomph of the whole thing, though–and a clear sign of her desperation–she also booked her personal organizer for 4 hours one of the mornings of my visit. Even though we all worked with great diligence, I’m not sure my sister got her $500 worth.

And that amount doesn’t even figure in the lateral filing cabinet she was instructed to get, nor the new bookshelf I told her she needed. Or the in and outboxes. Or the six new plastic tubs. Or the picture boxes.

Or the graduated metal desktop organizer.

We pretty much had to take a moment in Target and thank our dad for working so hard all his life and having the foresight to set up some paperwork that brought his leavin’s to us, after he passed.

One day, Kirsten and I spent some time in the garage, going through her bins of books. She only had every Beverly Cleary book two times over. Ultimately, we got rid of four milk crates of kid books.

She only got a little teary twice during this process. Then she announced it was time to be done. We needed to watch some HGTV shows. We were people who were hunting for houses. Internationally.

The next day, the professional organizer came. She wore camouflage pants, which made me fear and respect her even more than her well-slicked hair did.

Professional Organizer is going through a divorce.

Apparently, some things can’t be stored in a box with a lid, no matter how well labeled.

She had a plan for our morning. She and Kirsten set up a filing system for the new lateral filing cabinet, which Kirst and I had spent a few hours putting together the night before. 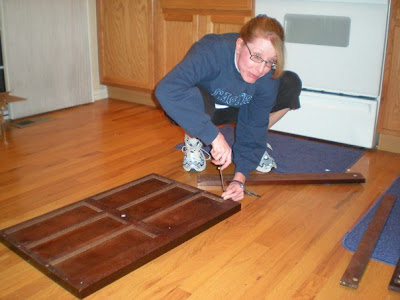 We only broke one of the two drawers during the process. 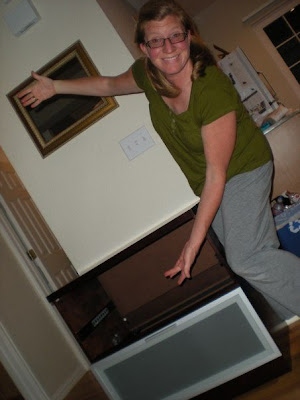 But you hardly notice the absence of the broken drawer (the glue was still drying), do you? That’s what a Vanna White flourish will do for any situation: mask and distract.

The next morning, when the organizer came, the drawer was in place. We appeared, so long as one didn’t probe or test the glue, competent.

Then Professional Organizer opened the drawers and noted that they were wrong–that this shelving was made for legal-sized documents, not 8 1/2 x 11″ papers.

Kirsten called a handyman. He will come next week and saw some new slots into the drawers, at which time all the bins of newly-filed papers will be put into them. Until then, the whole desk area looks a little undone. A little disorganized.

But the papers are in file folders. And everything is labeled. Almost makes a person think Professional Organizer’s marriage could work out after all.

While they worked on papers, I tackled the upstairs closet, which was full of All Kinds of Everything, including a broken cuckoo clock.

Everything came out, and I followed Professional Organizer’s three-step process (she went to class for this, incidentally, so the information you’re about to read is probably patented and trademarked):

1) Gather together like items (such as all photos) in a heap;

3) Deposit things you need to keep into a containment system. Get rid of the rest.

So, after jotting down a few notes on my palm, I did just that. Actually having my sister go through things and get them into a system, however, would take weeks. So I regrouped stuff, asked her a few questions (only one of which made her cry), and made it tub ready. In the future, she should go through the tubs and make further decisions or do more detailed organizing.

That’s probably not going to happen. The Amazing Race might be on that day.

There’s also a lot of Bejeweled Blitz to play on Facebook. 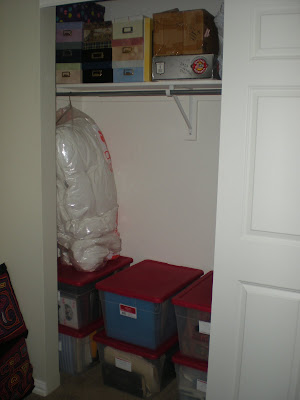 Here’s the final look of the closet, when I was done.

As I worked in the closet room, which houses my sister’s books, I realized her book mania was spilling over. Every shelf had stacks of books with no home, stacks that obscured the books behind. I lobbied for a new bookshelf.

Worn down, powerless, amenable, my sister agreed. Two nice young men at Target hefted the thing into the car, sideways, across the front seat. I rode in the back and called Kirsten “Jeeves.”

Once home, we had to turn to Flathead, Phillips, and Hammer one more time. We didn’t break anything.

Of course, a few pieces went on backwards.

WHAT? The shelf still holds books, no matter how backasswardly it was assembled. Don’t get all poncey and superior on me. 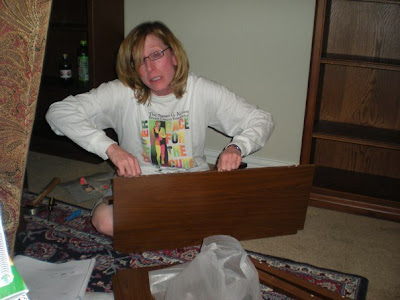 The back of the shelf was supposed to be attached with forty screws.

Kirsten decided eight would do. 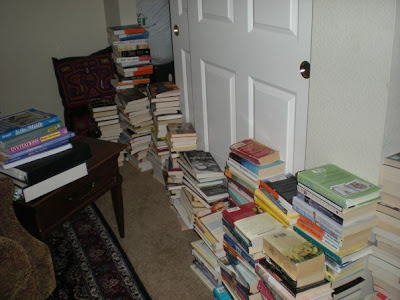 These guys are just waiting to bust out the flimsy back door of their new home. 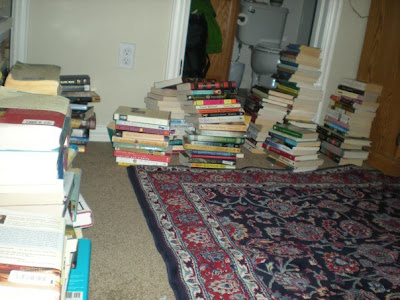 There were about ten more stacks, not seen in these photos. They were at Starbucks. 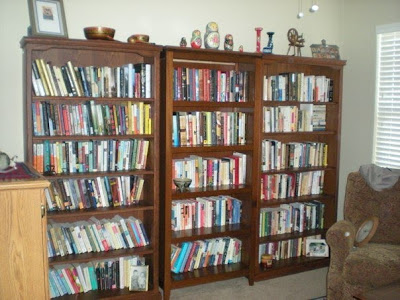 The end result. Please do not comment that there appears to be an unhung clock on the chair. I don’t have time to write about how Kirst won’t actually put nails in her walls, which leaves all pictures (and clocks) leaning against their intended place. She’s lived there 2.5 years. One step at a time, my friends. One step. at. a. time.

Another end result, despite files remaining unfiled, the garage remaining unorganized, and my sister’s wallet being seriously deflated,

is that I spent time with one of the two people on the planet who will know me cradle to grave.

We ate teriyaki bowls. She took me to Whole Foods and to its inbred cousin, Sprouts. She smiled tolerantly when I squealed over the quality of the napkins at the Whole Foods gelato counter, napkins that could serve as a night-time diaper on a three-month-old. She shared candy bars with me. She showed me how to use the remote. She burned me six CD’s of songs out of her Itunes. She took me two Jazzercise (which is another twelve posts in itself) and to three running trails.

She gave me a big hug at the aiport and asked when she can fly me back out, to help with the garage. 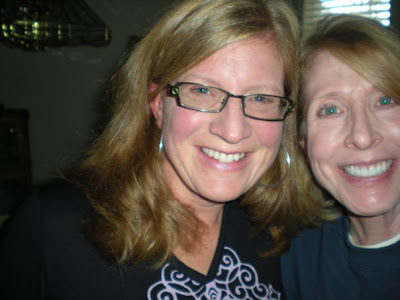 As a result of this whole trip, now I have a friend in Austin, Texas, who’s planning to give me a ticket to visit her.

Seems she still has the dress she wore when she graduated from college twenty years ago. It doesn’t fit.

Also, her Christmas decorations are already out.

Because they were never put away after last year.

I am delighted by her tousled state of affairs, if it means I get to see her.

And I’m considering–seriously–doing some training and starting a side career as a professional organizer. We could use the money (especially if I precede my sister in death; if I’ve earned some supplemental income, I’ll be able to bequeath her enough to hire Professional Organizer for the twelve hours it would take to go through her stacks of sweatshirts).

Before I can start this new career, though, I’m gonna need some camouflage pants.

all piles of crap pale in comparison to the mountains, the racket that is personal organizing