It’s that time of the year again. Sumpin’ about jolly and holly.

Not this grouch’s vibe. Nor is Kill The Turkeys day.

In trying to put a finger on why the holidays make me want to carve a cave into the side of Wal-Mart using my bare hands and then climb inside toting a headlamp, a Scrabble board, and a machete before rolling an SUV in front of the opening, I can come up with a few reasons:

–it’s the end of the semester, which means it’s all I can do to peel students off the walls and grade their lackluster work (why can’t they pour all that adrenaline into their writing?); by this time next week, when cultural pressures are smashing me into an undecorated pine tree, telling me to crank out some homemade gifts, and urging me to create a sense of tradition that will one day inspire nostalgia in my children, I’ll be facing a whole new stack of 100 essays that need grading before the next stack comes in the following week. I tell you: before I started the college teaching gig, it never had occurred to me that the end of the semester makes teachers completely whack, just as it does students;

–I already want to add three additional hours to each day, just so I can sit down more and read or write or talk to someone. The time crunch makes me NOT want to spend hours using Scotch tape and wrapping paper to “hide” presents when I know that same paper and tape will be ripped off in 5 seconds flat and crumpled into a ball that I later have to retrieve in its wadded form from under the couch. A week after that, I’ll still be scraping tape remnants out of the carpet. Three weeks after that, I’ll be crawling around the floor, picking up pine needles. Four weeks after that, I’ll carry the damn ornaments back down to the basement. Sometimes people have mentioned that I don’t really seem to make phone calls. Let’s thank Christmas for that;

–Any of the time or money that is put into holiday efforts–from shopping to washing up after a big meal to laundering the dirty table cloth–would feel better spent on a family trip somewhere, preferably a trip that sees me looking at art, running on a trail, and reading;

–I realize now, more and more, that I never much enjoyed holidays as a kid. Something there was always hollow. Flat. Contrived. (kind of like my parents’ marriage, which took thirty more years to come clean!).

Clearly, I am a holiday pisser of the highest order.

What became again apparent to me last week, however, was this:

I can’t blame my dislike of the holidays on family. While some dread get togethers because of tensions, fighting, drinking, passive/aggressive-ing,

I have lucked out. Because my husband’s family lives in our state, and none of my family immediate members does, we see my in-laws the most. And they are awesome. Seriously, if you offered me a thousand bucks to come up with a single complaint about my mother-in-law, I’d have to congratulate you on your good fortune at keeping that thousand bucks in your tight little wallet.

My husband’s parents, sister and her partner, grandparents, aunt and uncle, and cousins all live in the same town. To a number, they are the best people I’ve ever known.

They are so engaged and attentive and deliberate and thoughtful that I almost feel bad about wanting to go scratch out my Wal-Mart cave. In fact, I’m so near to feeling bad about it that I’d be glad to write them a card detailing my regrets as I squat there in Ye Olde Wal-Mart cave, if only the postal service would grant me a zip code and thereby allow me the return address required on mailings.

What I would tell them is this: if all the fuss and bother would go away, and only they were left behind, that would feel like a celebration, and no one would have to do dishes for an hour afterwards.

This photo sums up perfectly how killer In-Law Family is: 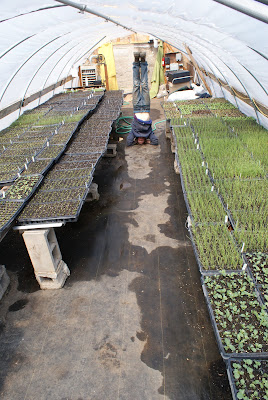 That’s Ben, my sister-in-law’s partner. They have an organic farm, which supplies kale and beets to locals in the form of CSA (community-supported agriculture) shares, supplies the co-op in town with cabbages and squash, supplies the residential colleges with tomatoes and spinach. In this photo, Ben (who’s also a trained yoga instructor) is doing a headstand amongst the seedlings in their hoop house.

I could stop right there, as I’m certain you have already grasped how un-hate-able this family is.

‘Cause a headstand in a hoop house is my idea of a party trick (much better than the time when I tried sticking a little pinch of chew between my cheek and gum while having cocktails and then swallowed a gullet-full of the Skoal and had to go puke in the lilacs. I’m a whole different kind of charmer than Headstanding Ben).

In case your jury is still out, I next submit this photo, in which my father-in-law pushes Paco on a swing they made out in the woods. Like his mother, Paco can be a little crabby sometimes…but never on a homemade swing in the woods with Grandpa pushing him. 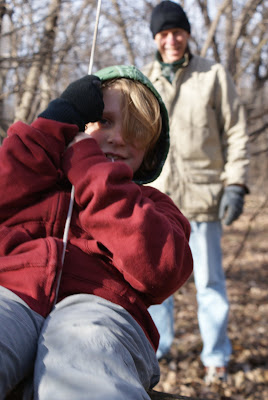 Maybe I need a holiday swing in the woods, and then I’d be able to hesh up.

But wait: I’ve got more evidence of this Crew of In-Laws’ excellence. Last week, a couple of days after Thanksgiving, Ben and Erin (my sister-in-law) hauled their cider press from the farm out to my in-laws’ house, so we could pitch together our Northern apples with their Southern-er apples and make cider.

Cider pressing is a process of control and violence, and seeing those apples get decimated whittled the edges off my sulkies. 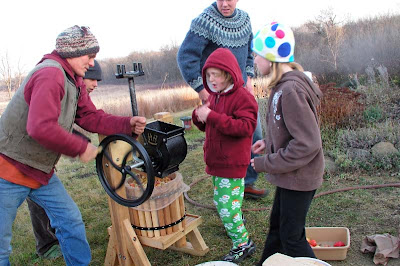 Even when Paco doesn’t have an ear infection, he likes a Pajama Day. But for SURE he needs to go commando and sport an elastic waistband when he’s running a fever. And for SURE pajamas are required when he gets to crank fruit into pulp (although one does worry about going commando around the masher; Boy Bits could flop in by mistake). Alternate cranking uniform: a vigorously polka-dotted hat. 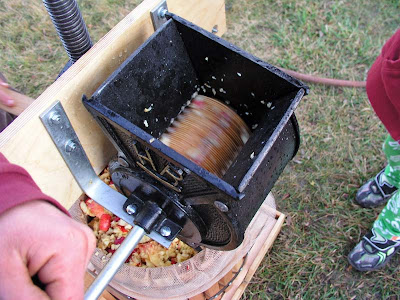 Bye-bye, crabbies (both the apples and my mood). 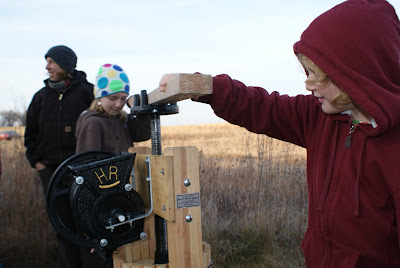 Paco and Girl, rockin’ the juice. 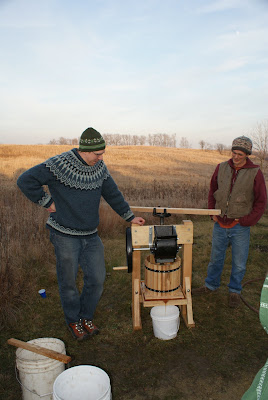 The man in the hairy sweater is Groom. I look at this photo and think, “GAWD, I canNOT even believe I have a crush on a man in a hairy sweater.” Then I remember I brought him that hairy sweater from Iceland, a trip that took place in midsummer, during 24-hours of light, which consequently messed up my biological clock and resulted–surprise!–in the girl in the polka-dot hat. So hell yea, he should wear that sweater. Without it, I’d still be a virgin. 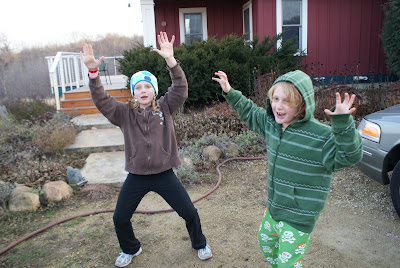 The Result of My Trip to Iceland and the Pajama Kid have taken to making up choreographed dances that they can trot out at any moment. I appreciate this a great deal, as Groom has always maintained that musicals are silly because people don’t just randomly break into song and dance in the real world.

In. your. face. Groom. Lighten up and sing “I Feel Pretty” already. Give us a twirl. 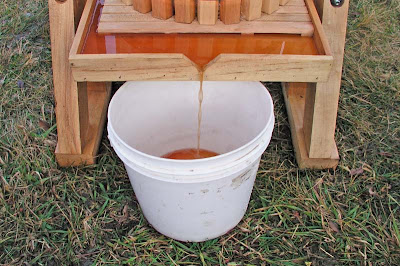 and the press lets loose its bladder.

Rallying in the face of such incontinence, I concede that holidays have their moments. As far as what my children will take into the future with them when they wax nostalgic, I can only hope their memories include the phrase,