Recipe for a Headache

My life policy of Don’t Get Harried is inviolate.

Also, I lie a lot, especially on Mondays, when zipping around and feeling always eight minutes behind is the norm, and my life policy is brutally, repeatedly violated.

The policy of Don’t Get Harried is predicated by the fact that doing lots isn’t part of my self-definition. For me, racing around from commitment to commitment doesn’t give life a sense of worth or purpose; on the contrary, it leaves me with a feeling that I’ve missed life’s purpose altogether.

Honestly, I have no idea what life’s purpose actually is, but intuition tells me it has something to do with sitting very still, pulling air into my lungs slowly, and staring at something the wind is blowing around.

Hey, if you take that description, plop a bag of Old Dutch bbq chips down next to me in the scenario, scatter about a few Little Debbie snack cakes, then suddenly I’m not so much seeking purpose as stoned.

Stupefied or meditating, either way I find myself sitting in a place, feeling a moment, being there. It feels right.

Contrast a relaxed Old Dutch day with my Mondays of late, and you’ll be screaming for a toke of the Mary Jane. For some reason, even though I don’t have classes on campus on Mondays, the start of the week has become crazy-mad-rip-roaring busy–as in, the day takes place in chunks of 24 minutes in 40 different places, and then the sun plummets, extinguishing exhaustedly.

Normally, this is just how it is. It just is. Last week, though, Monday took on an added pressure: it was my husband’s birthday. And since he is the finest of souls, and his birthday last year was particularly The Suck (being born right after Thanksgiving means you’re usually in a mini-van with crabby children, driving home up a grey highway, on your birthday; the highlight is stopping at the Chug ‘N Munch for wasabi almonds), I had vowed it would be better this year.

Specifically, because he never got a Birthday Treat last year, he would get something this year. I would figure out the details of that when the time came. Like, on his birthday.

Thus, last Monday, the Gourmet cookbook and I had a date. Since Groom had no preference about his treat (high maintenance, that one is), I leafed through, looking for a recipe entitled “What Jocelyn Would Like to Have But Which She Can Pawn Off as Being For Her Husband.”

Clearly, chocolate and profiteroles were in our near future.

The choice made, I scanned the list of ingredients, went through the kitchen cabinets and was able to whoop, “Yee-haw! We have sugar! This thing has legs!!” Then I wrote the rest of the ingredients down onto a shopping list and sent Groom off to buy his own damn heavy and ice creams.

What I realized, as the day went on, was that the Gourmet recipe was incredibly unrealistic. As if a person–on a Monday–can just take out the ingredients, stand in front of the stove, and make profiteroles and hot fudge.

Recipe, O Recipe, where is the section that has the cook crawling around on all fours in her basement pantry, spending 24 minutes trying to find the missing pastry bag?

Recipe, O Recipe, you mention 8 ounces of bittersweet chocolate, but why do you not mention 6 loads of laundry? 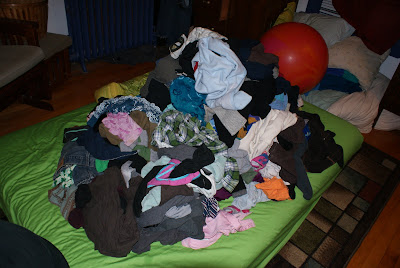 Recipe, O Recipe, why do you not mention the 24 minutes the cook will need to spend pulling together materials for the Girls’ Book Club she’s leading each week in her daughter’s 4th grade class? 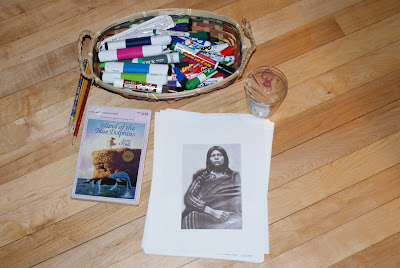 Why, O Short-Sighted Recipe, do you not list “24 minutes of driving to the elementary school” or “31 minutes of deconstructing the plot of Island of the Blue Dolphins with 12 girls” as necessary ingredients to your hot fudge? Why do you not acknowledge the emotional energy the cook will have to expend in explaining to a group of preadolescent girls that sometimes, as in the book, members of our families will die (albeit not at the hands of otter-pelt-hunting Aleuts)?

Recipe, O Recipe, why do you fail to mention the post-Book Club dash to first grade, wherein the cook will grab her 6-year-old, drive him 24 minutes to the Martial Arts studio, and–with no whisk in hand–help him strip in the backseat of a Toyota Camry and change into his karate kit?

Dear Recipe, you also neglect to mention the late afternoon latte the cook will need to make, after she whizzes home from the karate studio. By the time she has made her espresso, transferred the laundry, and found a saucepan, it’s time to go pick up Paco. Amazingly, during class, he’s managed to stain his uniform (with what??? blood???), entailing a double trip through the wash and the application of a bleach pen. Where is “bleach pen” on your list of ingredients, Ressy-pee-pee? 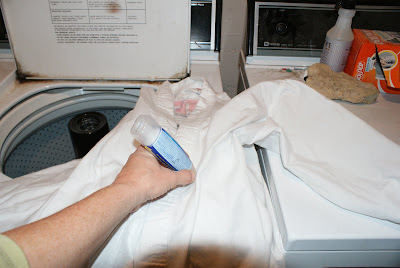 O Negligent Recipe, you also fizzle in the Homework Section of the baking, overlooking the fact that the chef’s daughter might have been asked, for Social Studies, to make a timeline (complete with photos) of the seven Biggest Events of Her Life. Due the next day. 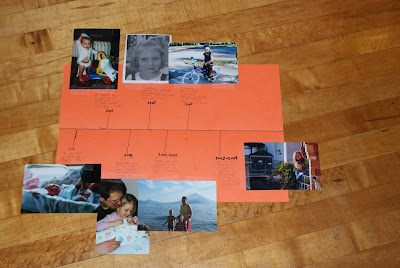 As it turns out, Dear, Blindered Recipe, 4th graders aren’t completely certain what the Biggest Events of Their Lives have been. Fortunately, cooks who are chopping 8 ounces of bittersweet chocolate are able to multi-task and suggest things like, “How about when you learned to ride a two-wheeler?” and light the burner simultaneously. 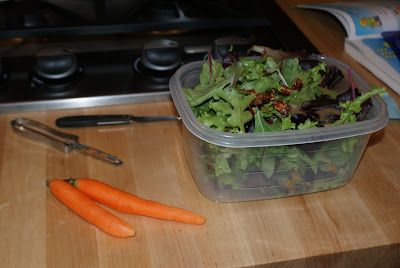 Speaking of simultaneously, O Recipe of Restricted Focus, you fail to lay out the moments when the cook will make her lunch for the next day, pack her gym bag, and ready her work satchel. Why do you not mention “ready work satchel” in your list of instructions, Small-Visioned Recipe?

Moreover, as your cook peels carrots that appear nowhere on your list of ingredients, she also muses that you underestimated the amount of homework 4th grade teachers like to give on Mondays. Dumb Recipe, you haven’t done the math. 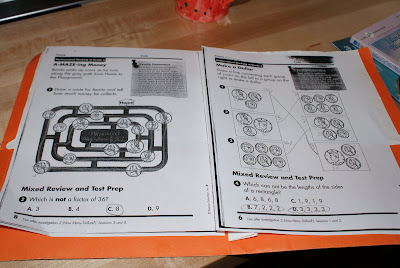 Specifically, Challenged Recipe, you have not allotted for the fact that a boy named Benito dropped a pocketful of change along a maze-like path, and my daughter–some sort of good Samaritan on a two-wheeler–needs to help him recollect it all, adding up his potential loss along the way.

Speaking of being lost, did I add the vanilla yet to you, Precious Recipe? I’m no longer certain, but assuage my feelings of confusion with the knowledge that Benito has regained his lost change and now has enough to go buy wasabi almonds at the Chug ‘N Munch.

Oh, and Benito? When you’re done, feel free to toss your wrapper into the trash. While the chocolate melts for the hot fudge sauce, I’m emptying garbage cans from around the house and compiling the recycling for its Tuesday pick-up.

The baking soda only went missing for a few minutes during the Recycling Phase of you, O Recipe. 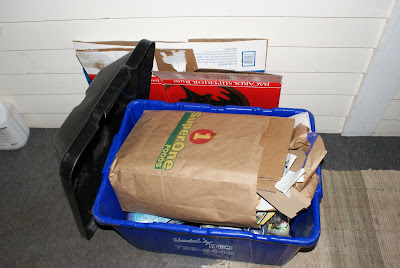 Ultimately, once my salad was made, and Benito had a full tummy, and the karate uniform was again pristine, 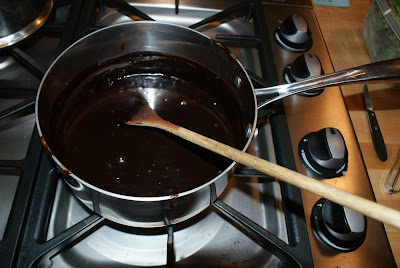 The labor had been long and difficult, but the fudge was dark; 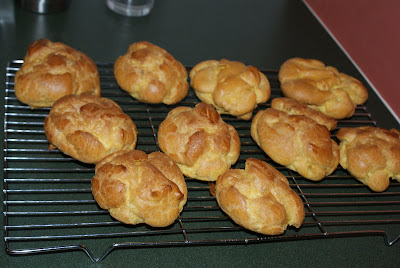 the pastries were puffy. 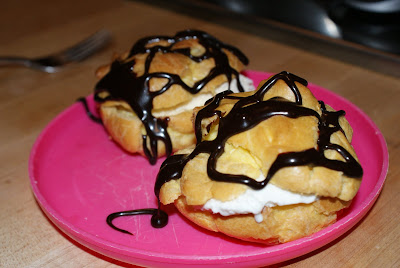 Ultimately, it all came together like a dream. Groom felt properly honored, and we all needed napkins. 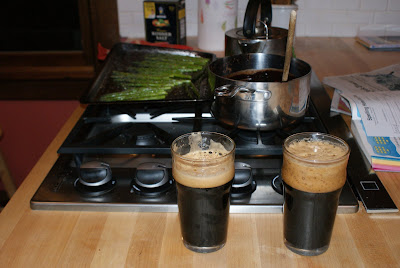 Of course, the real celebrating began after we’d put you to bed, Loyal Recipe,

and we took considerably less than 24 minutes to suck down your Urban Cousin: Surly Darkness, an imperial stout without compare.

When it hit our bellies, we sat

pulling the air into our lungs slowly

gazing out the window into the night

watching things blow in the wind.

birthdays, it’s all worth it at the end of the day, profiteroles, Surly Darkness

24 responses to “Recipe for a Headache”