I Promise You At Least Five Parenthetical Asides in This Post; Bonus Points If You Count More

There is a fortuitous convergence at the end of the semester:

Gasping for air from beneath a heap of research papers, I claw one hand out from under essays about childhood obesity, bacteria-phobia, the death of newspapers, and the upsurge in wind farms,

and that hand, calloused and gnarled, flops around blindly (what with having no eyeballs)

until it encounters my husband’s faintly-whiskered cheek (because he’s 99% Nordic Boy Wonder and 1% newborn mouse, faint whiskering is the most he can achieve).

The flopping, stroking hand is expressing appreciation. Were it in a bad mood, it would slap and flip off and plumb for ear wax.

For, just as Flopping Hand is cramping from clutching the grading pen and wiping away tears of disappointment,

Groom has finished out his semester and has work to show for it.

Translation: I ain’t be gottin’ much time right now, but, because my husband took some art classes all term and made pretty pictures, I can hitch my blog to his star and post them here.

At the end of last Spring term, I went on at some length in a video about his work, but this time I’ll be more brief (somewhat unattractively, your collective “whew” registers even here, miles and miles away). Groom took Painting I this semester and marveled at how long it takes to turn out a good piece, largely because one has to wait for the paint to dry before adding the next bit. Paint and wait; paint and wait; paint and wait. He also completed Art History, an online class that fully demonstrated any possible pitfall of online education (typed this mortified online instructor who canNOT believe the poor quality of “instruction” she has sometimes viewed over her husband’s shoulder in the last year, O Holy Mothers of Slackers Who Still Collect Pay Cheques). Fortunately, he had the textbook, read the thing and, therefore, edjamicated himself. Lastly, he took Digital Painting and Drawing, a course that fully demonstrated the possible strengths of online education. In fact, he learned the software and techniques so well that many onlookers can’t appreciate the hours upon hours of work he put into each piece.

However, as a kind and astute audience, I feel certain y’all will be just the right folks to see that talent can distinguish itself, even in digitized art. You are also the right crew to fathom how cool it is to have random pictures floating around the house when one is casting about for a picture to adorn, say, one’s anniversary invitation: 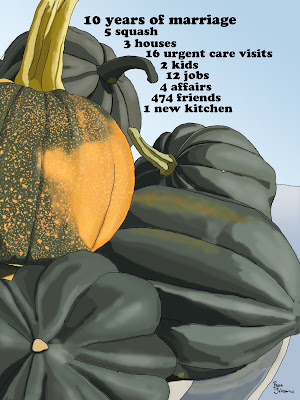 As you can see, Groom’s response to an assignment early in the term gave us fodder for our invite. While everyone enjoyed the image, some lost their breath upon reading the text. An astonishing number of people got all nervous and had to blurt out, “That business about 4 affairs? Really??? What happened? Is there something we should know?”

Yea. ‘Cause when people are throwing a huge party for their 10th anniversary, and they are the most soppily in love couple you know, and they have evidenced in the past a sense of humor that tends to skid sideways,

generally the backstory is a whole lot of adultery that screams out for publicity.

Knowing there was some consternation in the ranks after we sent out our invitation, we prepared an answer to use during the party:

“Yes, Guido/Carla/Father O’McFlanniganahan, there have been 4 affairs. Neither of us had them alone. We always had them together, as we enjoy opening the marriage to the magic of a third. So, uh, the first affair was with Miss Silvia, our espresso maker. The second was with Tina Fey. We took turns licking the make-up off her face. The third was with late night television’s Craig Ferguson; he brought puppets. And the fourth was with Omar from THE WIRE. Now, with that mystery cleared up, what did you think of the squash on the card?”

After the 85 wonderful guests (only 3 of whom remain bewildered–and hopeful–to this day with regards to the infidelity) trooped out after our party, Groom was ready for a little quiet time during which he could refocus on his art assignments. This past week, he spent hours and hours and then an hour plus 14 more minutes working on this (my favorite thing he’s ever done): 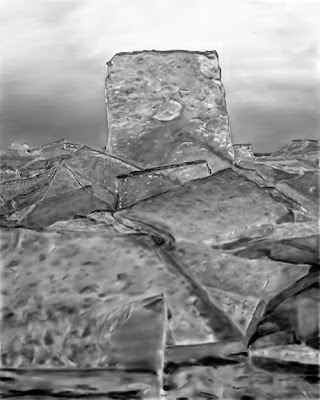 Based on photos of the ice packs that jumble the shoreline of Lake Superior each winter, this was his final project for Digital Drawing and Painting.

This picture does for me what Groom himself does. It alters my heartbeat.

But here’s the thing: he posted it to the online class, in the discussions area, amongst all the other messages containing digital paintings and drawings of unicorns, Captain Hook, and guitars sporting angel wings…and no one commented on it.

Later that night, Himself admitted to feeling a little hurt, as he’d been excited about what he’d created and hoping for feedback. But nothing.

The next day, he asked his instructor about it, and her take was that he had created an image that appears photographic. Everyone thinks he uploaded a photo and then clicked a few buttons on the computer, and voila (or, as my students write it, “Viola!”).

Eventually, a couple of classmates did comment, ho-hum “that’s neat” responses. Despite that, he feels proud of what he did, especially because he knows he opened a blank canvas on the screen, took the digital “brush” in hand, and drew, filling the blank white with just the right shadings of grey and charcoal to transport viewers to a cold February day on the shore of the world’s largest surface of fresh water.

In this case, the art provides my cramped, flopping hand with a frigid respite,
a soothing patch of ice upon which to rest and recooperate

before I force my attentions back to the next essay on the stack.

(except P.S.: at the art show on campus this week, Groom received bids on two of his pieces, one of them the squash from our invitation and one of them an oil painting. We’s rich! We’s rich! Daddy sold his squash so Mamma could get her some Grillz!)

22 responses to “I Promise You At Least Five Parenthetical Asides in This Post; Bonus Points If You Count More”