When I was in elementary school, sometimes I’d score a rare, coveted invite to Shauna Bergendahl’s house across the street.  She was about five years older than I and had perfect blonde feathered hair, the kind of Farrahed coif that shot her to a position as Head Majorette and a spot in the Homecoming royalty court.

With neighborhood kids flocking around her Obvious Cool, Shauna enjoyed a built-in audience, but usually we subdivision regulars were kept in the peanut gallery, out on her driveway, under the basketball hoop. 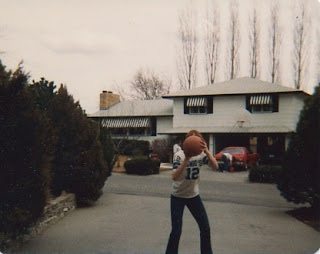 (Here you see the Bergendahl’s house from my family’s perspective; my brother weathered adolescence by shooting hoops and turning his back to the glory that lurked behind him.)

There, under their hoop, we could admire her dad’s red convertible and her tanned skin, along with her ability to hold forth while twirling a baton and doing the splits.

I can count on one hand the number of times I made it over the threshold of her split-level rambler.

On one of those occasions, a couple of us ended up in the basement with Shauna, a dark, paneled place with slightly-fetid carpet–a rec room that created the necessary atmospheric tension for playing Ouija Board and getting scared out of our wits.

That day, The Board spit out prediction after prediction for our futures.  So confidently did the planchette float around The Board during our suburban seance that I dared not ask it the big questions, such as “When will I die?”

If I knew when I would die, that would affect my every choice from that moment on, and I just wasn’t ready to have fear of death inhibit my desire to buy the new Tiger Beat featuring Leif Garrett on the cover. 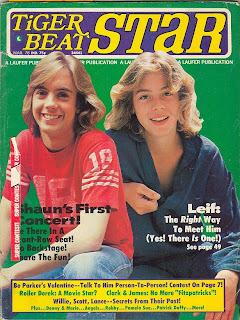 Thus, I settled for weighty questions that were still full of promise.  Most notably, I asked The Board, “Who am I going to marry?”

“T,” the planchette spit out.

“Tom Selleck?” I screamed.  “I’m going to marry Tom Selleck? He’s okay on The Rockford Files and everything, but he’s sooo old!  I might as well marry James Garner!”

Continuing to move easily, of its own accord, the planchette then hovered over “O.”

“T-O..???  Holy zippered jumpsuit!  It IS Tom Selleck!  I am going to marry an old guy.  What’s worse, he’s kind of a loser; I mean, he was on The Dating Game twice and didn’t even get picked.  Once his run on The Rockford Files is over, his career is going to be kaput–and, what, then I’m going to have to get a job as a nurse or a secretary or something and support the whole family?  I am so not diggin’ this bogus action.”

Important sidenote:  sixth graders in Montana did TOO use the word “kaput” in the 1970s.

Undistracted by my breathless commentary, the planchette kept moving, this time indicating the letter “N.”

Continuing its winding path around the board, the planchette came to a stop on the letter “Y.”

At that point, awed by the scope of my future and the fact that I’d one day need to cook for an Italian and our five kids when my current diet mostly consisted of Twinkies and Tang, I stopped.  Removed my hand from the planchette.  Looked up and Shauna and the others.

“Can you guys believe it?  I’m going to marry a guy named Tony, which pretty much means Tony Danza.” Sitting there, dazed, I hardly noticed the planchette beginning to move again.

Over the course of six more minutes of agony, the planchette spelled out clarifying details.  My Tony would have black hair.

Whaaaa?  As my future splintered around me, I registered “moustache” and “not Tony Danza then” in the same nanosecond.  Were there other Tony’s on the planet?  If so, did any of them have moustaches and look like they could love a suggestible redhead?

After that day in Shauna’s basement, I felt a new kind of power.  Not only did I have a vision of the man I needed to look for, I had a name.  Even better, I could skateboard through life’s vagaries with the knowledge that they were temporary, that my true destination hadn’t been reached until I lay in the arms of a moustachioed Tony.

Don’t tell my blonde, clean-shaven Norwegianish non-Tony of a husband this, though.

He’s laboring under the impression that our gig is a lasting one.

I, however, still feel certain there’s a fuzzy upper lip and a huge bowl of penne in my future.  Knowing my Tony as I think I do, I’ll bet the engagement ring will be buried in the red sauce.

Maybe, for consolation, my current-but-one-day-ex husband can hook up with Shauna Bergendahl at my wedding to Tony.  Her tan shoulders will look great in a strapless gown as she shimmies to “I Just Want to Be Your Everything” and hollers tipsily at our reception, “You and Tony are so boss, Jocelyn! It’s almost like ‘He’s the Boss’, eh?” (which makes no sense, Shauna, since that joke only really applies if I actually had ended up marrying Tony Danza, which I didn’t; praise The Virgin Mary for his Gillette razor).

Then she’ll throw up her baton and her dinner, give us a flash of Spanx as she does a high kick, and land with a thud in the splits and a puddle of Sautéed Sirloin Tips with Bordelaise.

I know for a fact that’s how it’ll go.  I just asked my Ouija Board,

and my hands were barely even touching the planchette as it spelled out that answer.

I never had a convertible or a tan, majorettes, neighborhood kids formed my psyche

17 responses to “No Jive Turkey”