During my early years, I shared a room with my sister.  According to the dates on the photos, it would appear I was about two when Kirsten and I moved into our shared room.  I’m also told we went to Disneyland when I was two, making that a very busy Year of Unremembered Wonders. 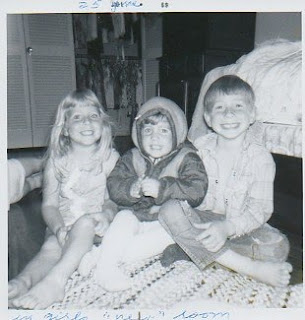 Here we are, christening the new girls’ bedroom by whacking at it with our bums:  Kirsten, Jocelyn, and big brother Geoff, on whom I spent a great deal of my first 18 years leaning (family lore has it, when I came home from the hospital–drove myself, incidentally–he took a gander at me and announced, “That’s MY baby.”  ‘Twas ever so). 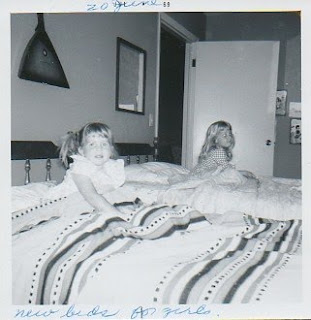 Amazingly, that balalalika hanging ominously over my pig-tailed head never did crash down in the middle of the night.  Look at it there:  how did I escape without a scar on my forehead?  What’s more, when I look at this photo, I still can feel that lined bedspread.  It had the texture of a particularly tough burlap bag.  Let’s all take a moment to praise the development of synthetic fibers, ‘k?  I bow before you, Empress Fleece.  I kowtow in front of your throne, King Micro-fiber.  I like to think, though, that sleeping under such a scratchy bedspread started my toughening process.

Indeed, I’m certain that bedspread is why, today, I can eat spicy curries, bite off even the bloodiest of hangnails, and remain tearless while I watching GLEE (except whenever those scrappy misfits sing “Don’t Stop Believin’”…and, oh yea, when the visiting deaf choir sings and signs “Imagine”). [grudging disclosure:  I just watched the Gaullaudet choir again, singing that song, and even though I know it’s patronizing treacle, I’m wiping my eyes with the edge of a pillowcase]

Sharing that room (and, later, another down the hall) with my sister clearly had its benefits:  I got tough; I hung with me sis; and consolidating two kids into one room made the house seem bigger.

But at some point, my sister reached an age where she needed her own space.  The collateral damage of that decision was me at loose ends, hanging around the house, wondering where I was to sleep.  On the hearth?  In Mumsie’s jewelry drawer?

Or how about this one?  I slept in one end of the rec room in the basement.  It was my choice.  Ready to make the move from Upstairs to Downstairs (where the cool orange carpet and hip wood paneling lived), I willingly joined my brother, who’d been a bottom feeder for some time.  He had a real bedroom in the basement, and my family helped me join him under the lower-level’s artifical lighting by cobbling together a “wall” made out of a screen and a big armoire.  We cordoned off the end of the rec room, threw a waterbed into the space, and dubbed it functional.

I LOVED that “room.”  For one thing, getting my own space also meant I got my own clock radio.  And with a clock radio, I was able to participate in the subculture known as People Who Dial and Redial the Local Station Called ‘KBear’ in an Effort to Win Free Black Sabbath Tickets.  Fleshing out that fun was the fact that my new bedroom featured a full-length mirror, which nicely reflected my many acts of Twirling In Nightgown.

Despite the beauty of claiming my twelve feet of rec room, a greater future beckoned.

‘Cause my brother had a real bedroom in the basement–like with doors and a built-in desk.

And, barring any unforeseen prison time, he would be going to college…

…leaving me at home for three years before I headed off to college–three years spent in yet another new bedroom, one previously called Geoff’s Room but which quickly morphed into Jocelyn’s Suite of Sweetness.
. 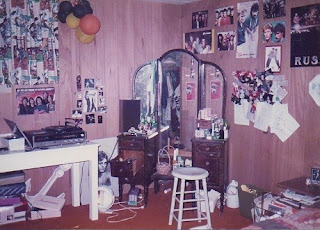 Sigh.  Looking upon my Suite, I find it hard to believe HGTV hasn’t hired me to be one of its decorating experts.  Too rarely on The Stagers do we see clusters of half-deflated balloons hung at window level, thus drawing the eye upwards and reminding potential buyers to “see the light.”  Too rarely on Real Estate Intervention do we see collages of Hall & Oates, Rush, and Journey assembled to convey a “these bodacious boys would love you if they met you” selling point.

And so my high school years were spent in the Suite.  I sat on the stool and used hot rollers.  I opened and closed the curtains featuring basketball and football players striving to score (at least the room saw some action).  I pinned dried corsages on the bulletin board.  I sang to “Sunday, Bloody Sunday,” marching around and waving an invisible flag at crowds of fans who echoed my every lyric.  I accepted an invitation to Prom, and shut up already that he was gay.  I smashed a rogue scorpion with a clog (Montanans ain’t no pussies).

After a few years, I filled out college applications there, too.  Ultimately, I left the Suite behind.  My parents sold the house.  Everybody grew up.

Of course, the bedrooms in the basement still exist inside my skull.  My younger self still occasionally visits the orange carpet, still stops in to straighten the stuffed Kermit the Frog and Fozzie Bear, still remembers the wheeee of sharing the waterbed with friends during sleepovers, still pings with feeling more social and lonely in that room than she’s ever been since.

Those rooms of my own bred in me comfort and courage:  to call and twirl and claim and decorate and open and pin and march and smash.  They showed me how to take my own room with me, inside me, wherever I go.

Now, thirty years later, I am fortunate.  I am able to give the same to my daughter.

For the last decade, she has shared spaces with parents and brother; of late, however, it’s become clear she’s ready to have a door to close. 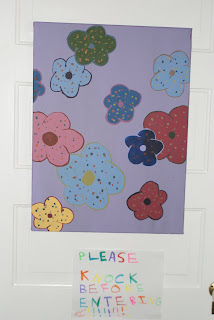 If we are willing to knock and wait, she comes to us, in her time, of her own accord.

Her new room is the only one in the house with no radiator and, thus, no heat.  She claims she’s used to it and doesn’t mind the cold.  Right there is an attitude that will help her soldier through middle school. 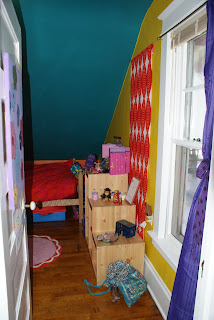 Paint cans and IKEA held all the bright colors she craved. 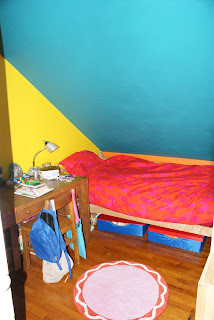 Although she can’t peer enough at herself these days, Girl opted for a desk rather than the vanity with full-length mirror that used to reflect my twirls.  Because she likes papers and pens, her feeling was that a desk would serve her better. 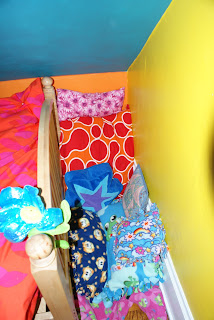 This is her reading nook, a space I could wriggle into…but then, Winnie-the-Poo-like, would have to remain in for weeks, until I shrunk enough to pop out. 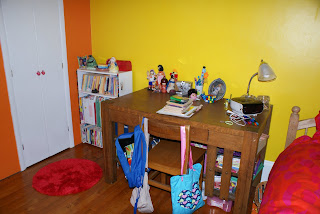 As much as she likes papers and pens, she also likes bags and fuzzy carpets. 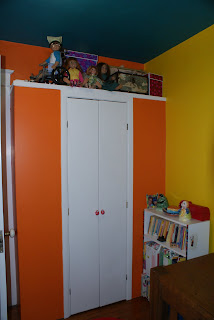 Stored way up high, in a place called Heaven, are her American Girl dolls. 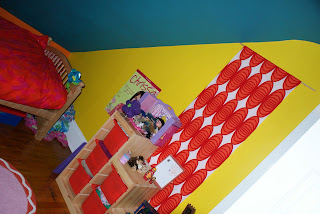 She wanted polka dots all over her walls, but we talked her into hanging dottish fabric instead. 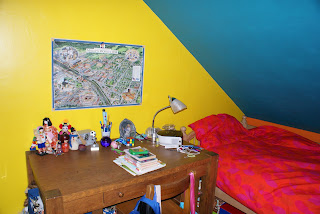 The only thing better than a journal and a ballpoint is a map.  Hanging this depiction of a WWII town on the wall gave her mind new roads to travel. 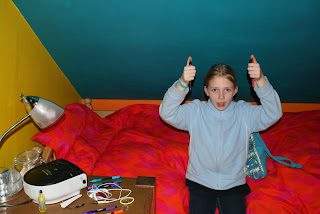 Perched on her warm comforter, new Ipod nearby, she clicks two pens, 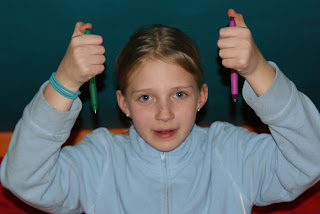 ready to write her own stories.

the heroine discovers herself.

a room of her own, everyone needs a garret and some pens

20 responses to “Fear Not Bold Colors”