Wherein This Becomes the Easiest Place for Me To Show Pictures To Family and Friends; For All Other Readers: I Appreciate Your Forebearance

What with turning seven and all, Paco had a party the other day. 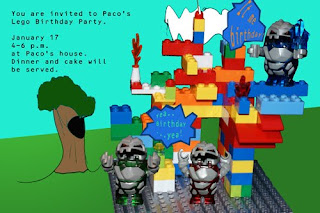 Paco and Groom made the invitation. The rock monster on the highest ledge represents Paco.  He yells, “It me birthday!” 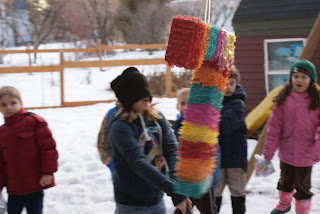 The festivities began with some pinata whacking, which resulted in a tumble of fruit snacks, candy, and Scavenger Hunt clues. 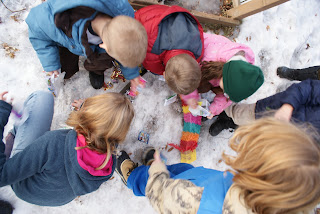 When I saw this photo taken by my husband, I had to holler, “Did you climb up the side of the swingset to snap this? What a vertiginous view!”

Then he informed me that he’d simply stood next to the circle of scrambling kids and shot the photo, and I had to yell some more: “You are a freakish giant, Mr. Lincoln, even without your stovepipe hat. No wonder children fall into a protective heap when they see you coming!”

Once they recovered from the presence of a gargantuan in their midst, and with their first clues in hand, Team Neighborhood Rockstars and Team Birthday Boy set off to peer in the compost heap, the tailpipe of the mini-van, the costume bin, and the washing machine. Ultimately, they discovered stashes of Lego sets.

You see, when considering his party options some weeks before, Paco had quickly realized, “I just want to have friends come over and build with Legos.”

Important historical footnote: the last time we hel Paco’s party at our house was when he turned three, and we had an open house with about 40 people, mostly stunned mid-winter parents staring blankly at their off-the-walls jumping, cabin-fevered children. For two weeks after the party, we despaired of ever righting the house. Thus, from then on, we’ve taken the lad’s party off-site.

Four years is apparently requisite healing time, though, as Paco’s desire to sit and build struck us as tolerable. We estimated what a “venue” party would have cost and decided to put an equal amount towards getting each party attendee this year a Lego set.

As we planned the party further, brainstorms of all sorts of add-on Lego-themed activities swirled, such as playing Drop the Lego in the Jar or Pin the Mini-Figure on the Castle, but Paco was having none of it. He just wanted friends and Legos and building.

We did manage to sneak this cake in on him, though. 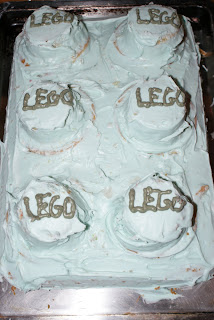 Incidentally, although Groom is prodigiously gifted in the kitchen, and he does most things well, he is the first to admit he can’t frost a cake. This fact, along with his complete inability to move to music, keep him tolerable.

Oh, and there was one more thing, in addition to building with friends, that the Birthday Bubs wanted.  Paco also wanted a tunnel through which food could be served, so that each kid could stand in front of it, watch a bit of abra-cadabra-ing, and then…with a lift of the curtain… 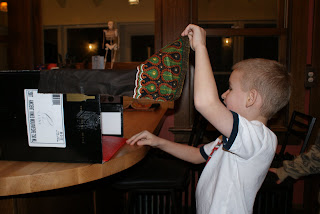 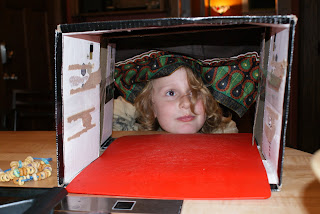 And in one memorably traumatic course, Severed Head! 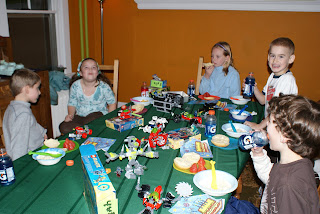 They built.  They ate.  They got serious giggles. 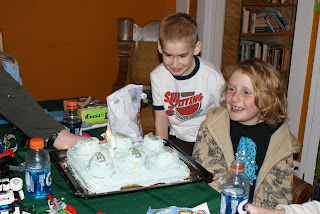 Once the all the submarines and wreck raiders had been snapped together, the big Lego brick of a cake came out… 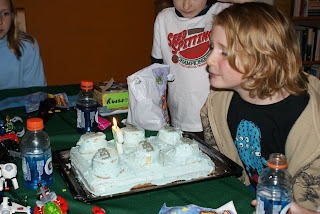 the seven-year-old filled his lungs, fluffed his hair… 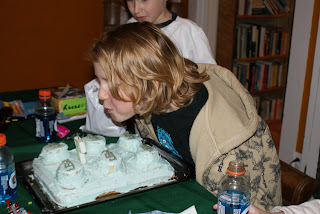 …put his lips together and blew.

And then–oddly–an Abe Lincolnish giant came out and did some magic as he cut the cake, serving each blue piece through a tunnel. 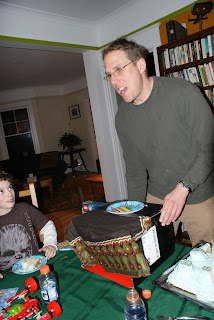 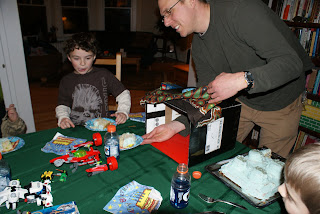 One of the kids wasn’t aware he was supposed to eat the cake; by mistake, he ate Mr. Lincoln’s hand instead. 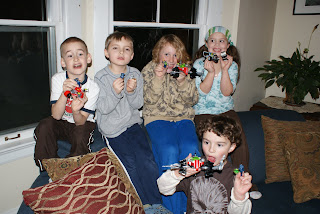 Considering the assembled crew, however, we felt lucky to have gotten by with only one severed head and one cannibalized hand.

Last time we had Paco’s party at the house, an entire grandma went missing.

At the end of Paco’s Lego Birthday, therefore, we were able to whistle the best possible wrap-up to any kids’ party:

25 responses to “Wherein This Becomes the Easiest Place for Me To Show Pictures To Family and Friends; For All Other Readers: I Appreciate Your Forebearance”