For once and all, I’m surrendering.

I don’t hate poetry after all.

The issue in my early years seems to have been the wrong poetry applied to the wrong brain.  Now that I’m flailing through Older Years, I keep bumping into precisely the right stuff.

Finally, I get it.

For my particular taste, the poems that work are simple and straightforward–but with a little rub in them.

Poet Louis Jenkins, who has lived in Duluth the last 30-odd years, writes just such lines.  If you have any income to dispose towards a volume of verse, I’d recommend you seek his out.

He writes “prose poems,” paragraphs and anecdotes that are denuded of all the “things that insist that the reader should be having a poetical experience,” as he puts it.  In short, his style releases readers from labor and hands them moments of knowing, of cynicism, of wryness.

I also really like that, noting poetry’s inability to earn great income, the 67-year-old, long-married Jenkins says he continues to write and publish for the “fame and glory…and the chicks.”

Take a moment to give this guy his due, would you?

By dusk the snow is already partially melted. There are dark patches where the grass shows through, like islands in the sea seen from an airplane. Which one is home? The one I left as a child? They all seem the same now. What became of my parents? What about all those things I started and never finished? What were they? As we get older we become more alone. The man and his wife share this gift. It is their breakfast: coffee and silence, morning sunlight. They make love or they quarrel. They move through the day, she on the black squares, he on the white. At night they sit by fire, he reading his book, she knitting. The fire is agitated. The wind hoots in the chimney like a child blowing in a bottle, happily.
———————————-
“A Quiet Place”

I have come to understand my love for you. I came to you like a man, world-weary, looking for a quiet place. The gas station and grocery store, the church, the abandoned school, a few old houses, the river with its cool shady spots . . . . good fishing. How I’ve longed for a place like this! As soon as I got here I knew I’d found it. Tomorrow the set production and camera crews arrive. We can begin filming on Monday: the story of a man looking for a quiet place.
————————————
“Uncle Axel”

In the box of old photos there’s one of a young man with a moustache wearing a long coat, circa 1890. The photo is labeled “Uncle Karl” on the back. That would be your mother’s granduncle, who came from Sweden, a missionary, and was killed by Indians in North Dakota, your great-granduncle.

The young man in the photo is looking away from the camera, slightly to the left. He has a look of determination, a man of destiny, preparing to bring the faith to the heathen Sioux.

But it isn’t Karl. The photo was mislabeled, fifty years ago. It’s actually a photo of Uncle Axel, from Norway, your father’s uncle, who was a farmer. No one knows that now. No one remembers Axel, or Karl.

If you look closely at the photo it almost appears that the young man is speaking, perhaps muttering “I’m Axel damn it. Quit calling me Karl!”
————————-
“Too Much Snow”

Unlike the Eskimos we only have one word for snow but we have a lot of modifiers for that word. There is too much snow, which, unlike rain, does not immediately run off. It falls and stays for months. Someone wished for this snow. Someone got a deal, five cents on the dollar, and spent the entire family fortune. It’s the simple solution, it covers everything. We are never satisfied with the arrangement of the snow so we spend hours moving the snow from one place to another. Too much snow. I box it up and send it to family and friends. I send a big box to my cousin in California. I send a small box to my mother. She writes “Don’t send so much. I’m all alone now. I’ll never be able to use so much.” To you I send a single snowflake, beautiful, complex and delicate; different from all the others.
—————————————-
“Appointed Rounds”

At first he refused to deliver junk mail because it was stupid, all those deodorant ads, money-making ideas and contests. Then he began to doubt the importance of the other mail he carried. He began to randomly select first class mail for nondelivery. After he had finished his mail route each day he would return home with his handful of letters and put them in the attic. He didn’t open them and never even looked at them again. It was as if he were an agent of Fate, capricious and blind. In the several years before he was caught, friends vanished, marriages failed, business deals fell through. Toward the end he became more and more bold, deleting houses, then whole blocks from his route. He began to feel he’d been born in the wrong era. If only he could have been a Pony Express rider galloping into some prairie town with an empty bag, or the runner from Marathon collapsing in the streets of Athens, gasping, “No news.”
———————————-
“Suitcase”

I keep my clothes in a suitcase at the foot of my bed.  I haven’t been anywhere and have no plans to go anywhere, but these days you never know, and besides it gives me a focus for my anxiety and for my occasional moments of unfounded excitement and anticipation.  Every morning I take out clean socks and underwear, etc. and throw the dirty clothes back in the suitcase.  Once a week or so I take the suitcase down to the washer and dryer in the basement and sit around naked waiting for my clean clothes.  That’s about it.  The days pass quickly enough.  Once in awhile I see old friends.  “You look tired,” they say or “Why the long face?” I reply, “Well, you know, it’s stressful, living out of a suitcase.”
——————
“Invisible”

There are moments when a person cannot be seen by the human eye.  I’m sure you’ve noticed this.  You might be walking down the street or sitting in a chair when someone you know very well, your mother or your best friend, walks past without seeing you.  Later they’ll say, “Oh, I must have been preoccupied.”  Not so.  At times we are caught in a warp of space or time and, for a moment, vanish.  This phenomenon occurs often among children and old people.  No one understands exactly how this happens but some people remain invisible for long periods of time.  Most of these do so by choice.  They have learned to ride the moment, as a surfer rides the long curl of a wave.  How exhilarating it is to ride like that, a feeling of triumph to move from room to room unseen, only the slightest breeze in your passing.
————————–
“Somersault”

Some children did handsprings or cartwheels.  Those of us who were less athletically gifted did what we called somersaults, really a kind of forward roll.  Head down in the summer grass, a push with the feet, then the world flipped upside-down and around.  Your feet, which had been behind you, now stretched out in front.  It was fun and we did it, laughing, again and again.  Yet, as fun as it was, most of us, at some point, quit doing somersaults.  But only recently, someone at Evening Rest (Managed Care for Seniors) discovered the potential value of somersaults as physical and emotional therapy for the aged, a recapturing of youth, perhaps.  Every afternoon, weather permitting, the old people, despite their feeble protests, are led or wheeled onto the lawn, where each is personally and individually aided in the heels-over-head tumble into darkness.  When the wind is right you can hear, even at this distance, the crying of those who have fallen and are unable to rise.
——————
Jocelyn’s prose poem, a shout out to Jenkins:

“We Cannot Consider Your Offer at This Time”

I spent two hours today uploading photos.  We’re hoping to go live somewhere else for a spell, so we’ve signed up with some home exchange agencies.  Selling our lives to others requires photos and many fawning adjectives, packaging the quality of our refrigerator so that Australians or Germans want to come use it.  As I clicked the upload button repeatedly, having each attempt fail, a drumming began in my head, one that pounded, “You are very busy thinking about next year when, right now, there is work to do here, now.”  In response, a different drum beat a tattoo of, “Yes, but when I think of the possibilities of next year, the here and now seem prettier.” Then I clicked the button again. I went to yoga and squatted out the tension.  Later, after I sent out 45 letters of inquiry, the responses began to trickle in:  “I’m sorry…,” “…already committed…,” “…best of luck…”  Reading these over, I went back to doing the work of here, now. 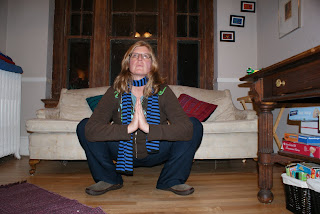 Louis Jenkins, things I read that make actual laughter come out of my face, when does squatting NOT get rid of tension?