Lots of Landmines, No Metal Detector: The First of Several on This Topic

When a child is born, the parent enters into a decades-long negotiation with the world.  The script for this give-and-take reads:

Parent, puffing out chest:  “Surrounded by a loving village of friends and family, my child will never question that she is loved.”

Parent, still confident:  “I will provide steadiness and an open heart and opportunities, and they will help to form my child’s character.”

World, dashing off a quick text to Mars:  “Hogwash.”

Parent, bristling and speaking in clipped syllables:  “I love to ski, read, and walk in the woods.  Therefore, because I will model positive experiences with these things, my child will also love them.”

World, gazing into the mirror and fluffing its bangs:  “Suck it.”

Parent, absently running a hand across a well-thumbed copy of What to Expect When You’re Expecting:  “If I lay down a good foundation in the home, my child will be prepared to take on all of life’s challenges.”

World, ordering a Large Pepperoni, Extra Cheese:  “Up in ya.”

Hmmm.  Upon review, it would seem World isn’t ceding much at all–not even feigning consideration of the parent’s agenda.  Rather, World enters the negotiations wearing ear plugs, bound and determined to hum “la-la-la” and do whatever the hell it wants to, even in the face of the very best intentions.

World can be a serious bitch.

As I’ve watched and experienced this interplay over the last ten years, since having kids, I’ve noticed that the room gets particularly tension filled when Parent is also…um…how to put it?  Crunchy.  Does that work?  Is there a term for modern-day lefty/boho/hippie types (besides “Alicia Silverstone”)?

No matter what you call us (er, “them”), there are parents–mostly white, mostly well educated, mostly Dems–who greet much of the world with tolerance and compassion.  We–sorry! “They”–buy fair trade and embrace whole grains and present their friends with donation gifts of “one cow, good for milking, which will transform the lives of a needy family in Ghana.”  At their best, we/they live thoughtfully and deliberately and hope to be agents of change.

There are flaws in the profile, though.  For example, while such people buy Christmas ornaments made by “a women’s cooperative in Nicaragua,” they are less comfortable supporting the cottage industries that transform the lives of their own nation’s poor–i.e., rapper 50 Cent’s G-Unit clothing line.  Even more, at least in my community, while Loving Whitey Libs are largely anti-consumerist, they’re also incredible gear heads; you better believe the bleedingest hearts top their $20,000 Subarus with $700 Thule cargo boxes to help carry their $300 Karhu skis. 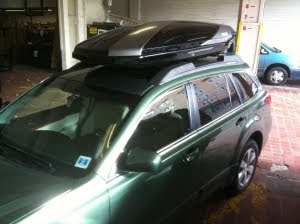 And, okay, sometimes there’s a certain moral self-righteousness that crops up in the Crunchies (for more of this, SEE:  The Extreme Right).  Finally, when it comes to Crunchies having a baby–and I tell you this as someone well acquainted with Tree Huggery and all its related lentil eating–there are some pretty uniform values in place.  To delineate just a few:

This list could continue ad nauseum, of course.  My personal Mommy-Crunch-O-Meter score on the previous items hovers somewhere around 4, but that’s a rough calculation, as I did some things with Kid #1 that I didn’t with Kid #2, and Kid #2 was the beneficiary of a few things we hadn’t known about with Kid #1.  Let’s round my score to a 4.16489.

I nursed both kids as long as it worked; we used cloth diapers with Girl (there was a service in town, so every Monday morning the dirties went away, and a new bag–a plastic one!!!–of cleans dropped with a plop); we used a sling with Paco, which, as I recall, allowed me to wash four dishes one day when he was a month old; we co-slept like crazy, in the hopes of getting even 20 minutes of sleep, but it was hardly an instrument of family bonding, as Groom had to to sleep in a different bed, given the limitations of our full-sized mattress; and, em, I would have loved a water birth, but only if a team of epidural-wielding, Speedo-wearing doctors were in the tub with me.

What I’ve learned, since achieving that initial 4.16489, is how complicated every values decision becomes as the child’s life continues…and how that controlling bitch, World, becomes increasingly adept at interferring.  So long as it was just the three of us, then the four of us, dancing around the living room to Joni Mitchell, we remained on the Path of Liberal Righteousness.

Well, except when Girl was colicky for three months, and the only thing that preserved anyone’s sanity was our nightly watching of “Blind Date” with host Roger Lodge, a program whose jejune highjinks I still thank for being the sole bright spot in a very dark time.

But when we weren’t watching crap tv on Volume 72, we, assuredly, pureed sweet potatoes and talked birdwatching.

Then the colic receded, the baby grew up, we had another, they found friendships, we enrolled them in activities, they went off to school…and before we knew it,

they were citizens of Writhing, Delightful, Unpredictable, Bitchy World–affected by values we hadn’t orchestrated.

is it wrong to breastfeed ’til they’re 12?, parents get real, when hippies breed

23 responses to “Lots of Landmines, No Metal Detector: The First of Several on This Topic”