1) Antidote #1:  Get a good night’s sleep, which is exactly what I did the night of my previous post; when I woke up nine hours later, cobwebs had cleared, and a song–not a dirge–beat in my heart. This, in turn, meant I had to spend a fair amount of time in the kitchen that afternoon pretending to be a member of George Clinton’s band and/or part of Agnes de Mille’s dance troupe. The two groups actually have significant areas of overlap. Remember, for instance, when Ms. de Mille staged her “Get Up into Yo’ Funk” program shortly before her death? Some still speculate it actually led to her death, what with the steady expansion and contraction of her ribcage in sync with the lyric of “tear the roof off the mother.” Few things will more assuredly bring on a stroke.

2) Antidote #2:  Appreciate that my daughter and her friends’ favorite activity, during playdates and sleepovers, is to toot and pluck together in raggle-taggle musical ensembles. Since they all attend the local music magnet school, they were able to take up a non-piano instrument this year, in 4th grade. 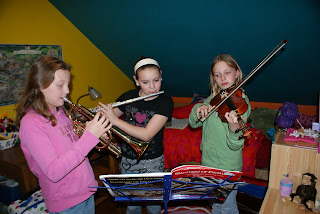 Girl represents the orchestra, and her pals, seen here, bring on the brass and winds. It is nearly impossible for audience members to remain seated when these girls pull out the stops on their “Good King Wenceslas.” Even better is when I get to wave my lighter in the air during “We Will Rock You.” (sidenote: the school district issued an announcement this week that, starting next fall, the city’s magnet schools will be demagnetized, cutting out music, science, environmental, and language foci at various elementary schools; as part of this, non-neighborhood children whose families have elected to send them to particular magnet schools will no longer be given bussing…all of which means, since we rely on bussing to get our kids to their magnet school, that it’s hella good we’re going away next year; it gives us time to hammer out a new schooling plan for our kids, which may very well be that we start an illegal Quaker/Buddhist class in our basement with a curriculum that emphasizes quiet, peace, and cessation of suffering. Imagine the quiet hum that will constitute “recess.” Anyhow, my point here is that I can only use 4th-graders-who-come-to-our-house-and-play-music as a Doldrum Antidote if I practice active denial of next year’s realities…so keep coming over and firming up your embouchure, and make sure you don’t vote for a Republican governor when you grow up). 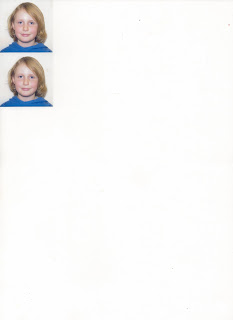 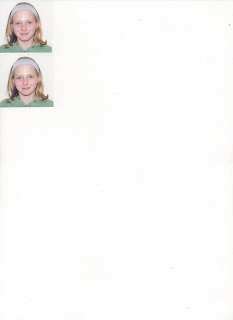 (My children are very, very small, aren’t they? Relative to their pin heads, I am a towering figure of authority. Actually, I just can’t be bothered to figure out how to save their pictures as larger files. I mean, I’ve got dance and blunt-rolling classes in the kitchen with Ms. de Mille and Mr. Clinton in five minutes, so it boils down to priorities). What perked me up most in the whole passport photo adventure this week was Paco’s attitude; he gets really annoyed with photographers telling him to smile and, in particular, to show his teeth. The fact that he’s in first grade and already has a pretty vehement stance against making posed situations feel even more artificial pleases me no end. In fact, the more he looks like a model for American Gothic in his photos, the happier I get. My secret hope is that his next passport photo will feature him flipping off the photographer.

Renewing our passports is the first step to upcoming journeys, necessary before we launch into the visa process, which gets pretty entangled when travelers want to go live for a long stretch in a country without seeking employment. It will take some doing to prove to Skeptical Visa People that we don’t want to leech off the economy but, rather, will contribute heftily to their wine and chocolate industry profits. Incidentally, and purposely cryptically, I will say only that we do seem to have something like a plan in place for next year (sort of nailed down; sort of loose), in terms of where we’ll go and who will live in our house…but I’m hoping to have a few more things firmed up before disclosing details. Just for fun, we can play a guessing game, though. It looks—fingers crossed–like we’ll be in a place where English is not the primary language of use, on an island, near an active volcano. Anyone?

4) Antidote #4:  Hop on an airplane to a warmer, sunnier place, which is exactly what Mein Groom and I are doing from Wednesday-Sunday (as in, right now!) of this week. You may recall back in October that my sister flew me to Denver to help her organize her stuff and watch cable tv. Ripping a page out of that FranklinCovey Planner, my college friend Shannon (and her helpful mother) bought both me and Groomy tickets to visit her in Austin, Texas, to do the same. Apparently Shannon still has the dress she wore to our college graduation nearly 21 years ago; it doesn’t fit, nor has she worn it since. A little warning to Shannon: Jocelyn doesn’t think you need that dress anymore; she’s aiming to put some space between you and that dress. Keep the memory. Ditch the dress. Plus, Shannon? Let’s get those Christmas decorations put away—and in a big old labeled tub while we’re at it. Then let’s have margaritas and an entree with the word “carne” in it. Because I’m pretty sure “carne” can cure any case of February blues.

There you go. Thanks to sleep, Agnes and George, musical ensembles, the inherent promise of a passport, and the beautiful gift of a junket,

it ain’t so bad, yes we’re going to a foreign land called Hawaii