Deep in the Heart

Some of y’all might remember that my sister flew me to Denver last October so’s I could help her organize her stuff.

Upon my return from that fun weekend, I posted something on Facebook about it…only to have a pal from college reply, “I would totally buy your plane ticket, if you’d come help me organize my house!  Actually, I’m pretty sure my mom would pay for it; she so wants my house to change.” Warning her that I take people up on offers like that, she continued, “And I’d pay for a ticket for Groom to come along, too, if he wants to pitch in.” Indeed, when College Pal called her mother…just to casually mention the idea that she had some friends who might be able to come help her sort through some of her stuff, she managed to get out the words, “So Jocelyn went and helped her sister get some areas organized and I was thinking…” before her mother broke in and announced, “I will buy that girl’s plane ticket, if she’d come down and do the same for you.”

The idea of a trip to Austin, Texas, in mid-February didn’t sound half bad. Even better, another college friend, witnessing the Facebook discussion, chimed in, with a, “Hell, for the fun of the hanging out, I’ll buy my own ticket.”

So that’s where I’ve been the last handful of days: home of the LBJ Library, the largest urban bat population in the U.S., and College Pal’s herd of empty shoe boxes that she still keeps just ’cause.

Oh, and, yes, I know you’re wondering: we did drive by Lance Armstrong’s house. Tragically (luckily?), he and Matthew McConaughey weren’t running shirtless outside the compound.

Despite no photo of Lance and Matt, here’s a brief pictoral overview of a few things I did see: 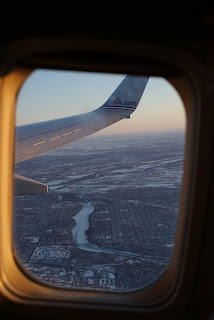 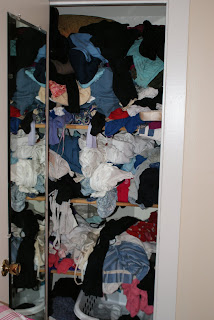 One of college pal’s closets; woefully, it was too low down on the priority list to make the cut for our attentions.  Maybe next time… 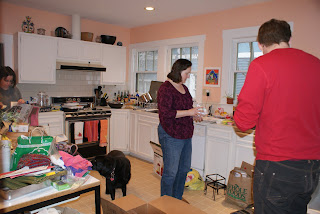 The crackerjack work team in action.  I feel nothing better sums up the state of College Pal’s kitchen than this fact:  she owned three woks but couldn’t find even one of them.

Now, after the Clean Sweep Team came through, she owns one wok and knows exactly where it is.  Sizzle. 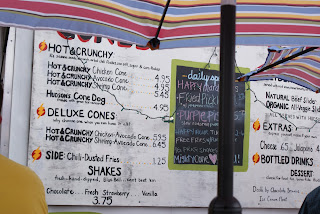 Workers need sustenance, of course.  How fortuitious that College Pal’s neighborhood features a line of food trailers, all serving up energy-restoring fare. 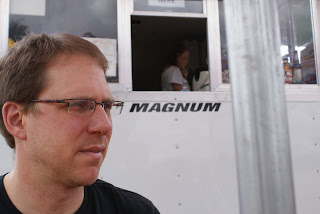 Here’s how Groom (er, I mean “Magnum”) looks shortly after excavating three woks.  Because we only took carry-on bags, he didn’t bring a razor, so I got to see whiskers emerge over the five days.  Groom’s genetics have not predisposed him to be a hairy beast–more newborn mouse is he–and so beard-growing has always been a sport where he fails.  However, I am a supportive spouse.  Therefore, as each whisker popped out, I clapped loudly and bellered, “You’re going to be a man one day, Son!”

He didn’t think I was very funny, as he was waiting for his chicken-avacado cone.  Generally, Groom finds me more amusing on a full stomach.  Or with a few beers in him.  And maybe a shot of vodka. 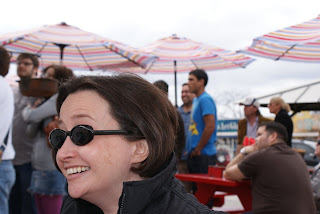 Here’s my beautymous Other College Pal, she who pitched in like a champion.  You wouldn’t even know from her grin that she, like Groom, was waiting on a cone (hers a shrimp-avocado one).  And you really wouldn’t know that she’d recently placed into a Goodwill box a pair of metal/welded chicken legs and feet that had been constructed with the purpose of serving as a bowl holder.

I know.  They’re nearly indescribable.  Suffice it to say, when Austin College Pal had been given them as a gift, she opened the box, pulled out the chicken-footed contraption, and sobbed a little inside, moaning internally, “This is what you think of me?  You saw this and thought of ME?” 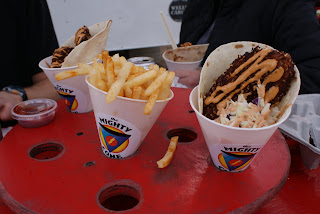 Then the cones and fries arrived, and everyone stopped thinking all together. 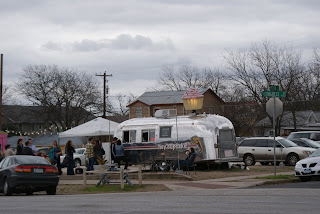 Next to The Mighty Cone trailer is this cupcake Airstream.

I’ve always wanted to live in an Airstream.

And that was even before I realized I could have cupcakes as roommates.

In addition to patronizing the trailer foodstands, we had fun meals in local restaurants, including The Salt Lick, which is a ginormous barbeque joint.  I would’ve taken pictures there, too, but my hands were too slippery to hold the camera.

So we ate a lot; we talked a billion words; we cleaned out some closets; we took trips to Goodwill.

Now, today, it’s back to real life, a place that feels just a little bit softer, a little bit happier, a little bit warmer, thanks to the journey.
—————————————-
Speaking of journeys and in a total change of subject:  I loved all the guesses about where we’re going next year, to the point that I don’t want to do The Reveal yet.  (insert evil cackle here)

A few more hints, then, based on further information we received today:

There’s a large waterpark 20 minutes away

The women don’t take their husband’s surname upon marriage

busting with bbq, college pals, how many woks does one Texas beauty need?

24 responses to “Deep in the Heart”