I Think I Need a Good Plucking. I Said PLUCKING, You Guttermind.

In seventh grade, I played flute, piano, and bassoon.  I took ballet and modern dance several days a week after school.  I sang in the children’s community choir.

Simultaneously, in seventh grade, I believed KC and the Sunshine Band had created something revolutionary with their “Boogie Shoes.”  I thought Shields and Yarnell redefined the boundaries of bodily movement and were, just perhaps, magic.

Thus, in seventh grade, I was a peculiar mix of “couth” and “unschooled,” of “cultured” and “mainstream.”

This mix came to a head in 8th grade, when I performed for my peers, in English class, a puppet show version of Romeo and Juliet starring Froggy and Miss Piggy.

To this day, I can only say the words “But soft, what light through yonder window breaks?  It is the east, and Juliet is the sun” in the voice of Jim Henson.

That is to say:  I’ve never made much sense.  Highbrow and lowbrow swirl together, resulting in a mottled brow that is almost “right” but which is, under closer inspection, somehow a little “off,” rather like the caterpillars that hitch a ride on Jennifer Connelly’s forehead: 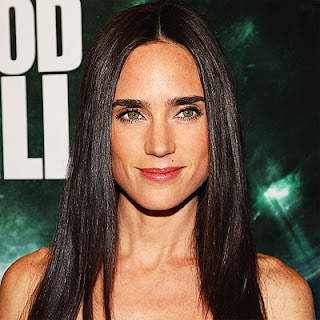 The thing about being a Mottled Brow is that I just was, just me, just fine, not noticing inconsistencies in taste or values

…until I wanted to partner my life with someone else’s.  Because when you’re with someone all the time, ’round the clock, in the same space, inconsistencies of character prove difficult to hide (just ask Dr. Jekyll’s wife about the contents of his briefcase, and watch the resulting rictus of horror).  My challenge, then, would be to find someone whose notion of A Life Partner encompassed a mate who wants to attend Lucia di Lammermoor to have a good cry but who also tucks a romance novel into her jacket pocket, just in case the beautiful yowling gets boring.  Indeed, a Potential Jocelyn Mate would require the patience to understand a woman who wants to take piano lessons again as an adult–but mostly so she can work out new variations of “Peter Peter, Pumpkin Eater.”

When I was casting about, during my dating years, to find someone who might want to commit to a long-term gig, it never occurred to me that I would actually find someone who could accept All the Vagaries that Make Up My Wholeness.  Instead, I thought Life Partnership meant Pretending to Be My Best Self…for the rest of ever.  Frankly, while always presenting my finest self sounded exhausting, it seemed a fair tradeoff to loneliness.

Of course, this version of Jocelyn didn’t actually exist in nature, but I attempted to bring along (in a suede hip holster) at least four of the outlined traits to any interaction with a Potential Partner.  In reality, sometimes limber was enough.

When I met Groom, back when he was simply Beau (he changed his name when we got married), I was amazed at how easy it was to embody four, five, six–all–of the desirable traits.  He just made me feel that good.  Also, he’s a pretty pure soul, and so blending my muddy waters with his clear rivulets helped my sediment settle.

As we got more serious, though, I worried about dropping the act and wondered if the emergence of Real Jocelyn could be a dealbreaker.  I mean, it was easy for him to love me as we read aloud to each other, nestled in a big rock on the shores of Lake Superior, but the truth was, eventually, in his presence, I would make a bad smell.

The worry started to niggle.  One day, just as I was trying to work up the courage to tell non-processed-food-eating Beau that sometimes I just need to cram about fifteen Double Stuf Oreos into my mouth (knowing that he occasionally swigged a can of Coke when he felt a migraine coming on, I thought he might relate to my version of a migraine, something called “life,” which was only curable with a massive dose of the tonic called Oreos), he launched into the story of a time when he’d had a few free weeks and, therefore, decided to fly his bike with him to Seattle, whereupon he’d get on his bike and pedal it back to Minnesota.  You know.  For fun.

Quickly, I understood this wasn’t the time for my Oreo confession–or even for a commiserating, “Yea, I know what you mean.  One time I had a bunch of weeks off in the summer, so I watched all The Beverly Hillbillies episodes for the eighth time.”  Wisely, justly, astutely, I simply made murmurs of “wow” and “I didn’t actually know a person could do that.”

Beau detailed the richness of his experience:  camping in city parks, striving for 100-mile days, avoiding carloads of rambunctious teens, picking up mail from his parents at various postal drops.  I continued to murmur “wow” and “I didn’t actually know a person could do that.”  Then I added a weak, “One time, Jethro and Elly Mae had a fight in the cement pond…”

Internally, I’d come to a moment of reckoning.  Beau set the bar pretty high–without even trying.  While I thought I might be able to hang onto that bar, toes scraping the floor, for a wee bit, I also knew it wouldn’t take long for my arms to start quivering and for me to topple down onto an awaiting mat woven of Oreos.  Indeed, I could continue to pretend to be a Fine, Fine Person, but eventually, the jig would be up, and Beau would encounter me mainlining Jelly Bellies off a canoe (Jelly Bellies:  mine; Canoe: his).

Somehow, I agonized, somehow, I was going to need to reveal my true self without sending him screaming into the woods.

I took a deep breath and continued, “So, yea, as I was saying, Jethro and Elly Mae had a fight one time in the cement pond–this wasn’t the episode with yodeling or Minnie Pearl–and so, well, you probably wonder why I know so much about such inane things…”

Fortunately, Beau’s head had been under the bed, where he’d been scrounging around, trying to find his bicycle repair kit from the Seattle journey, something he’d first learned to use long before that trip when, in preparation, he disassembled his entire bike into tiny pieces and made himself put it back together a few times.  Just so he’d, you know, be prepared (my idea of “prepared” had been to bring my own plastic cup to keggers in high school).

With his head under the bed, he hadn’t heard my Beverly Hillbillies confession.  So I sucked in another big breath, ready to try again, when,

he spoke first:  “You know, one of the things I remember best about that trip was the week I knew People Magazine’s ‘Best and Worst Dressed’ issue was going to come out, and I spent two days trolling through drugstores in tiny Northern Montana towns, trying to get my hands on a copy.”

BWAHHHH?  Had my beloved tempeh-eating marathoner really just said those words?  Did I hear right?

‘Cause it sounded suspiciously like a proposal to me.

In that one moment, with those words, his People Magazine admission reset everything for me, gave me permission to spill my own foibles, allowed me to realize that discussion of pileated woodpeckers can exist in consort with conversation about how ice cream sandwiches should only be eaten in multiples of two.

Part II is coming next week. This weekend, Groom is, semi-ironically, flying to Seattle for four days (his bike literally broke underneath him some months ago, so its shattered self isn’t going along this time) to visit friends, and, single-parenting it, I’ll be taking the kids on a long drive to a super-fun Oscars party…and I don’t even have to lie to Himself about what we’ll be doing.  Because he knows I’m a whore for celebrity culture!!  And he wouldn’t even be surprised if we stopped at the Mall of America to visit the Lego store!!!  Nor would he be shocked to know we’re going to eat a bunch of cheesecake at the party!!!!!!

23 responses to “I Think I Need a Good Plucking. I Said PLUCKING, You Guttermind.”