The Clock Struck Midnight, and My Every Dream Came True. For, Like, a Day.

You know how it’s impossible to guess Susan Lucci’s age–unless you look at her neck?

And then you gasp and declare, “Why look at those deep grooves!  Say there, you well-preserved soap sprite, you’re holding up nicely–but maybe wear a scarf, eh?”

This is not a judgment.  Personally, I’ve not only got some grooves but also have the start of a wattle; I’ll be the one hiding behind the rain barrel come November, when it’s slaughtering time for the national day of belching.

Unlike La Lucci, my wattle isn’t the only giveaway of age.  Unlike La Lucci, I need to wrap my entire head in a scarf to preserve the illusion of youth. (’cause, er, all the 19-year-olds these days are waaaay into wrapping their heads in scarves)

I mention my age because I turned 43 yesterday.

Even though I didn’t jump from a plane or hop a junket to Cancun or get a pony, it was pretty awesome.

We went to parent/teacher conferences at the elementary school, for one thing, and if that’s not your idea of a great birthday celebration, Scroogey McHatesKids, then try factoring in the Scholastic Book Fair we browsed after the conferences, and if you’re still not convinced that looking at books is a fun way to pass the time on a Day of Significance, consider this:  Scholastic is offering Star Wars book that pits characters against each other in hypothetical battles, and readers of said book are then asked to predict the winner.

I KNOW.  What could be more fun? (typed the indulgent mother of a 7-year-old boy)

Thus, I spent my birthday dinner in a restaurant, eating charcoal grilled tenderloin tidbits in a Bearnaise sauce and shouting out “General Grievous would totally dominate Emporer Palpatine!” and “Droideka clearly would trounce Bossk!” (wrong on both counts, incidentally)

Other highlights of my day were being awakened by Paco at 7:30 when he busted in for his usual cuddles but, in honor of my big day, gave me the huggles while warbling “Happy Birthday.”  Then the whole family gathered ’round while Paco disappeared under the bed, coming out completely dust-bunny-ridden but with presents in hand.

Poodles, I got a Webkinz.

Okay, to be honest, the kids have given me one each of the last three years.  They wanted me to be able to decorate my Webkinz’ own apartment instead of trying to micromanage where they placed the sofas and coffee tables in their own pets’ little rooms.

I was not either still up at 2 a.m., decorating Mucca’s room in a chic Japanese theme, replete with bamboo floors, hanging scrolls, and a bonsai tree.

My other gifts were a gyro (a few years back, I started asking for toys for my birthday–things we all can enjoy):

and a Kindle.  Yes, a KINDLE!  We’d talked about getting one before our upcoming adventures next year, knowing that we couldn’t tote along enough books to feed four voracious readers and being uncertain of the availability of books in English once we get onto the island of Sicily, but I hadn’t expected the Kindle purchase until summer.  Part of me hasn’t been terribly enthusiastic about the idea of reading off a handheld screen; I do so love the tactile experience of reading a book and the opportunity to leave Triscuit crumbs between pages, but I figured I’d rather read off a screen than not at all.

However, one day into the Kindle, and I can tell you it’s cooler than I expected.  I like that it makes no noises, and I like that it’s so intuitive that a semi-Luddite like myself is able to use it easily.  Plus, Amazon provides the first few chapters of new books for free, as a tantalizer that will, ideally, lead to purchase.  So last night I downloaded and tasted the first bits of a few books I’ve been curious about.  Even better:  any book over a hundred years old that doesn’t fall under anyone’s current copyright is free.

Which means all of Jane Austen’s works, so now I can carry around in my hand–or bra–Austenian nuggets like “A woman, especially, if she have the misfortune of knowing anything, should conceal it as well as she can.”  Well, I could do the latter if the Kindle fit into my bra.  Which is kind of today’s project, if you really need to press the point.

Which kind of shows you how well I’m doing at concealing the anything I know.

Anyhow, lots of older books are free, so we’ve loaded the thing with The Secret Garden and Little Women (a little light reading for Groom) and also some free chapters of the latest Magic Tree House and Elizabeth Gilbert’s Committed and Julie Powell’s Cleaving..and..and…and, in the spirit of Jane Eyre, I need, at this juncture, to announce of my Kindle:

Reader, I married it.

Clearly, the Kindle was a birthday highlight.  Another highlight was the cake Groomeo made me–a little something from a Gourmet cookbook involving chocolate devil’s food cake and brown sugar buttercream. 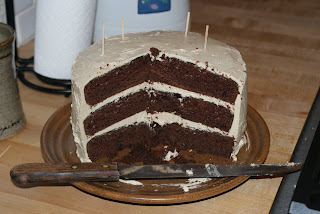 However, the biggest highlight of all grew not out of reading or baking but out of mania.

You see, in the last few months, I’ve been playing a lot of Scrabble on Facebook. Then my sister challenged me to the game called Scramble, which is, essentially, Boggle on the computer. Scramble occupied me for a few days, but eventually clicking on the same three-letter word combinations, with a few longer ones like “dashing” thrown in, got old.

So then I tried Word Twist.
It’s an anagramming game.
I’m not a natural at anagramming.
But I’ve wanted to get better.
Because I am all about expanding my repertoire of useless skills. Sure, it’s great that I can quote episodes of “Three’s Company” and stand on one foot for a respectable amount of time, but the repertoire has been ripe for new additions.

Word Twist has done the job. Basically, in the game, the player is given six or seven letters and then has two minutes to spell out as many words as possible. Longer words get bigger points.

The first round I played, I think I got a 17. This would have been fine…unless you factor in Facebook’s evil strategy, which is that a “ladder” of one’s friends’ names and their scores runs up the righthand side of the screen, so you know how you rate compared to everyone else you know who’s played the game.

And eff all if fellow blogger, Lime, didn’t perch triumphantly at the top of the ladder with a score of 166.

The thing about Lime is that she comes across as jovial and interested and fun.

I’m going take a risk here and holler that Lime is some sort of freakish Word Twist savant crazy beyotch creature from the depths of verbal hell. Because 166?

It hurt me many muches.

In my healthier moments, I’d view her score as a goal.

When I’d get tired, and the screen would start to waver in front of my bleary eyes, I’d cry a little and realize I could never match her. I readjusted my expectations and challenged mortals.

Groom and I had comparable scores for a bit, until he scored a 100. At that point, I was entrenched with a 92. Day after day, the score held.

I also was taking on my pal Kirsten. We were worthy adversaries.

As is no doubt apparent, I’d gone to a very dark place with the Word Twist. In fact, I actually had to cut myself off from it for a day or two.

Then, in an effort to allow myself to play–but for myself! as a personal challenge!–I decided my birthday goal was to break a damn 100.

Then, the other night, as I was chatting with Kirsten and playing The Twist simultaneously, I hit a game and immediately deciphered the longest word of “testers” which of course leads easily to “testes” and “tsetse,” not to mention about 27 others.

At the end of the two minutes, at exactly midnight, marking the start of my birthday, I got a 164, still short of Lime (“Argggghhhhhhhhhhhhh,” me bellows, shaking fist to sky), but putting me in 2nd place on The Ladder.

The jubilation that filled me carried me all the way through the next day, puffing me up as I opened the Kindle, as I stretched my hamstrings in yoga class, as I sat next to Groom at a matinee, as we heard good things about our kids in the parent/teacher conferences, as I guessed Yoda would drop Darth Vader in a one-on-one (wrong again!) over dinner, as I ate cake and admired a birthday bouquet…

and then, when everyone had gone to bed, and the house was quiet,

only to discover Kirsten had pulled a 201 in Word Twist earlier in the day.

It’s also the year when I’ll need to take a long, mandatory hiatus at a “recovery spa.”

I know what part you’d want to attach you preevert, personal expression through whiteboard, with Star Wars references in this post so maybe I’ll get a male reader or two

21 responses to “The Clock Struck Midnight, and My Every Dream Came True. For, Like, a Day.”