That Gentle Rustle You Hear? It’s the Sound of Monet Rolling Over in His Grave

“I love this place,” breathed Paco, looking around in wonder. “There are zombies and aliens everywhere.”

Of course there were.

We were at the end-of-semester community college art show.

Speeding up to a trot, Paco cruised down the concourse, calling, “Hurry up! Here’s a Super Mario made out of mosaics! Come ON. You won’t believe what some of these students were able to make. Look, there’s a chair made out of pop cans!  And a mask in the shape of a devil’s head! Wait, and then someone put a baby in a bucket and took a picture!  I wish we could buy it all!”

While uncountable pieces in the art show induce eye-rolling exchanges between me and my husband, we do delight in Paco’s untrained taste, which makes him the perfect audience for artistic work that grows out of, ahem, untrained taste.  For many participants and onlookers, it’s their first brush with creation and appreciation.

Of course, there are many pieces in the show that grow out of talent and skill; there is much to look at that is lovely, arresting, worthwhile.  Even the efforts that aren’t perfectly accomplished are often interesting, for they mark points on a continuum that runs, on one end, from airplanes made of beer cans to, on the other end, professional pottery.  A student art show makes visual all the bumps and jolts inherent in the learning process.

For Groom, who took Watercolor, Art History II, and Digital Photography II this semester (he’s finishing out some generals at the college where I teach before he launches himself towards another degree in the next few years), the classes have been challenging and fun–have put him onto that continuum somewhere between the fledgling “Look, Ma, I scratched out a parrot” student and one who pounds out impressive metalworked pedants. 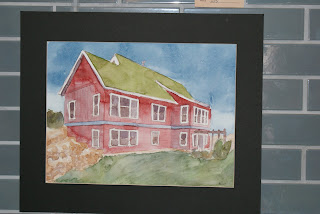 The watercolor class was difficult because it’s such a delicate medium that it can be difficult to paint something forceful or “sharp.”  I do like this rendering of my in-laws’ house, though. 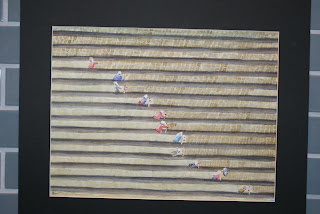 This one is my favorite Groomed watercolor; it’s a picture of workers in the ginseng fields (which, em, we have lots of here in the frigid Midwestern U.S.). Anyhow, both Groom and I like looking at little people doing stuff.  That’s why we make our kids vacuum. 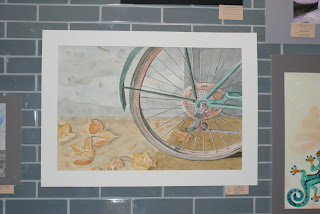 This painting is the one Groom was racing to finish and submit before leaving town for his grandma’s funeral.  While I quite like it, I can only hear his mutters of, “Just two more hours in the day would lower my blood pressure right about now” when I look at it.
His Nibs also has a few digital photographs hanging in the show.  One is the “Pursuit of Frankenstein” featured in a previous post.  But he also did a nice shot of the former drive-thru window at a now-closed bank: 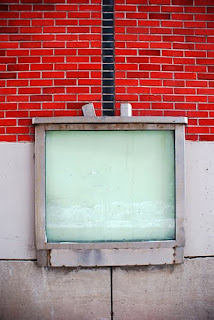 Here’s my pretentious, artsy critique:  Jumpin’ Jeeeehosephat, but get a load of dem colors.
And finally, this last is my favorite thing Groomeo did all term; it’s a photo of a pine needle and some sort of wrapper laying out on our rickety deck: 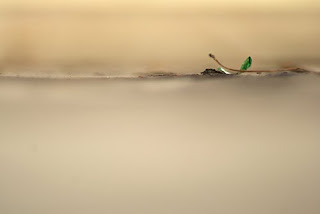 Appropriately, it’s called “Deck Litter”
After admiring all the dragons and guitar heroes and Tinkerbells featured in the student art,
and after scarfing down the free Domino’s pizza that was served at the show (a truer indication of the event’s quality I cannot find; get this:  as I ate the pizza, my lips and tongue got kind of buzzy and then numb…could it be, perhaps, because I was ingesting food items with no actual connection to anything growing or existing in nature?),
the kids each grabbed a bottle of water, and we headed out into the parking lot, 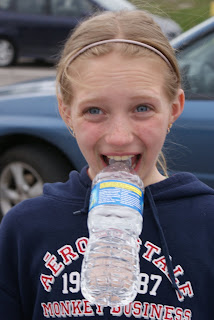 whereupon they transitioned quite naturally into a kind of performance art: 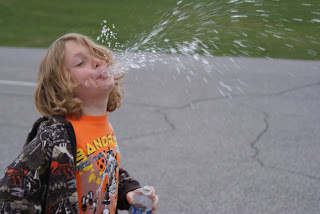 the Art of the Spit Take.

23 responses to “That Gentle Rustle You Hear? It’s the Sound of Monet Rolling Over in His Grave”