While it always saddens me when my virtual life is neglected, I can’t mourn it too much when the neglect stems from a flurry of activity in my here-and-now life.  That is to say:  we have visitors this weekend, as we did last weekend.

This time, our pals Virginia and Kirsten are visiting from southern Minnesota. They are married. They are gooey in love. Virginia is 74. Kirsten is 38.

They serve as a reminder to anyone despairing at the state of his/her existence that life, in any given moment, isn’t necessarily all that it will ever be. Just hanging in there–doing things like traveling with an acting troupe, volunteering in Madagascar, going to college, battling cancer–is often exactly what paves the way for the bright, hoped-for happy ending (which, as for all of us, will end with a fade to black).

That’s what Virginia and Kirsten did before they met. They got on with things, tra-la-la-ing here, dithering there, slurping mangoes while standing at the sink, meeting friends at the coffee house, tooting around, ministering to parents, shoring up friends, eating at Applebee’s.

Then they met. Their fingers touched as they sat next to each other in a darkened theater.

Some months later, there was a wedding. To finance that big show, Kirsten sold her beloved motorcycle.

A few weeks ago, now a couple of years into their gig, guess what Kirsten went out and bought? 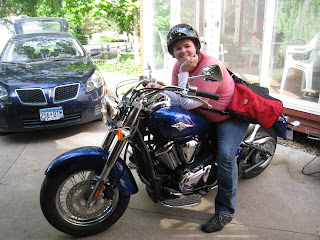 Because it is stormy this weekend, and because they were bringing us a huge suitcase (along with ninety-twelve other delightful things), and because Virginia’s new chaps haven’t arrived yet,
they drove their car and left the bike at home. 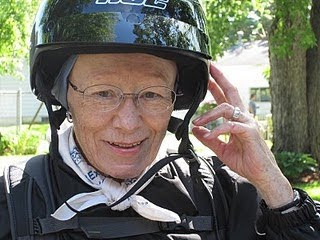 However, these photos make evident that, at age 74, after months of chemo for her third go-round with cancer (the chemo’s not beating it, merely causing the tumors to hold steady, thus lengthening these ladies’ time of high romance together),
Virginia’s never looked better.
Plus, who even notices a bald noggin under a shiny helmet? 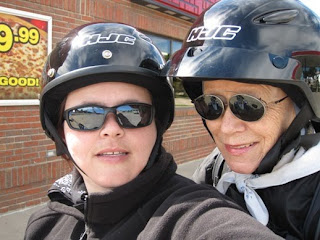 There can be no doubt:  they were destined to ride off into the sunset together.

evidence that chemo doesn’t have to get you down, The Vulcan, too bad they couldn’t fit a huge suitcase on the back of the bike