I Only Know He’s Human Because Sometimes He Smells

My husband and I have a dynamic in our marriage predicated on his innate superiority and my unwillingness to be fazed by it.

Since I’m someone whose self-esteem can be shaken by a student commenting casually, “You sure have been an interesting teacher” (What the hell does “interesting” mean?  Did no one ever teach you to use precision in language?  Cripes, but you should take an English class once, Junior…hey. wait. a. minute.), I have to believe my confidence–my Blind Eye–within the marriage stems out of the magical ju-ju called Luff.  My groomeo is awesome at everything, and somehow I’ve decided that means I’m great, too.  I gather his abilities around me into a swirling crinoline and take the bow for both of us.

The truth is that I weasel myself into his achievements by promoting them, by doing the talking, by pointing out that the dinner at our house is always amazing because he makes it.  There was actually one time when Groom ran by during a snowshoe race, and a reporter for the newspaper asked, “Who was that man?  Does anyone know his name?”–at which point I provided the information as though I’d birthed him myself (in a grueling 36-hour labor that ultimately took my life).

Listen, the guy is so good that a few months ago, at the request of our former realtor whose daughter was getting married to a Frenchman, he baked TWENTY BAGUETTES IN A SINGLE DAY AND THEN PULLED THEM IN A BICYCLE TRAILER DOWNTOWN TO THE WEDDING RECEPTION, WHEREUPON THEY WERE GREETED WITH “TRES BIEN!” AND “OOH-LA-LA!” BY THE ASSEMBLED CONTINENTAL GUESTS.  Groom’s response to all the praise was, “I’ve always had a dream of delivering some baguettes by bike.”

Jocelyn’s response was, “Did the Frenchies really like them?  He makes good bread, doesn’t he?  I took about ten pictures of them.  He does this thing where he uses a misting bottle to spray the insides of the oven while they’re cooking, so as to assure a crisp crust.  He also uses that bike trailer each week to pick up our CSA box of produce from the farm.  Plus, did you know he took six weeks once to bike from Seattle to Minnesota?  And also, as he was making those twenty baguettes, he took a few hours out, during the rising, to go volunteer in the first grade classroom when 31 kids were making gingerbread houses.”

This is the moment during post writing when I slow down for a minute and think, “I’m pretty sure I started out with a point.  But isn’t it always interesting to see where we wander off to once I start the typing?”

So, refocusing:  in our last episode, I’d abandoned crinolines and death in childbirth to don the duds of the carnival.  I’m a regular host of the Oscars here, with all my costume changes and snappy one-liners, ain’t I?  You’d best jump back and check your Facebook before I trot out an “Uma, meet Oprah. Oprah, meet Uma” bit of schtick like Letterman did when he hosted.

Okay, so anyhow.  My. point. was.  That Groom is great, and all I ever want to do is hear the world shout that right alongside of me because he’s smart and funny and talented and never gets annoyed with my many obnoxisities (go figure) and can do everything and comes from a family where they live forever (as long as I’m doing a digressive post here, here’s some indignation for you:  Groom’s grandpa will be 97 in a few weeks and has been in hospice the last few months; his wife passed away next to him mere months ago, too.  Once she had passed away, he rebounded a bit and decided he needed a new laptop to help him while away those draggy hospice hours, so he ordered one.  When it arrived, he drove several of his children nuts with learning the new programs and applications, but he was getting there.  Then, one night his son left the hospice center after a visit and plugged his dad’s new laptop in so it could recharge, leaving it on the chair next to his aged father.  By morning, IT WAS GONE BECAUSE SOMEONE HAD STOLEN IT.  The whole thing makes me want to believe in hell, so that the crapass Laptop Thief Who Takes Expensive, Life-Sustaining Stuff from 97-Year-Olds in Hospice can roast for effing eternity).

Yea, that sucked, but the fact that Grandpa is soldiering on is amazing.  I’m pretty sure Groom has that kind of longevity bidness in him, too.  In fact, I’ve told him for years that he can one day put me in a nice home so long as they wheel me out to watch Jeopardy every day at 4:00.  If he wants to swing by once a week during his long run and pat my hand for a few minutes, I’ll be good with that.  Maybe he could check the batteries in the remote while he’s there, before he trots home to cook up a fritatta for four.

Hmmm.  Self-check here: yup, I’ve used the words “fritatta” and “Uma,” so I can finish now with this post’s ultimate unveiling:

In addition to my usual ramblings posted here, Groom’s going to blog our year in Turkey in a comic form.  He loves a good graphic novel and is aiming to use the shades that come from black layered over white as he captures some of our best–and worst–moments.  He’s putting up his first post August 1st, at which point I’ll provide a link, but in the meantime, I ask you to ogle his first few panels for the thing; it’s the invitation we sent out to the bon voyage (?yi yolculuklar in Turkish) party we’re having this weekend.

Based on what you see here (click for enlargement and know that he used his mad Photoshop skillz to obliterate our family’s surname on the third panel, so that’s why there’s a white space in the text)– 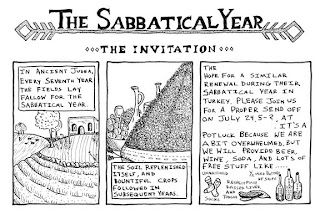 …don’t you think his blog is going to be fabulous?

Better than this one, in truth.

Rest assured, though:  I’ll act as though I invented his every idea.

At the very least, I’ll provide him with an endless source of material.

and he doesn’t have any cavities, either