“Hallo!” called a voice from inside the courtyard.

My daughter and I were heading out to the manav to hunt down fruits and vegetables, so without breaking step, I called back “Hello!”

After this call and response, there was a rustle inside the courtyard, and a body came flying out to the street; it was a typical village woman, reminding me vaguely of my grandmother and great aunts, and she was determined to make contact. In a more typical Turkish greeting, she kissed both of my cheeks and greeted me with “merhaba” followed by a string of Turkish words, unintelligible to me except for “çok” (pronounced “choke”), meaning “very.” When she paused for breath, all I knew is that I’d been given a “howdy” and a “very” with a whole bunch of effusiveness sandwiched in the middle. In some fundamental way, I’d met a communicator of my own ilk.

Leading with my best Friendly Public Face, I attempted to ask, through exaggerated mime, if that was her house inside the courtyard. When she invited us in for “çay” (pronounced “chai”), I was certain it was—either that, or she was a cok comfortable squatter. My answer to her—because, MERHABA, this is Turkey—had to be yes. Our elbows firmly grabbed, we were ushered into the courtyard and told to sit down at her fly-cloaked table. Moments later, a bowl of cut-up tomatoes was set down. Darting a look at my daughter, I gave her the “Remember: it’s always your job to make a dent in the hospitality tomatoes in this country since Mom doesn’t like them, and in return, I’ll let you hand me all sorts of other ‘gross’ stuff under the table, ‘k?” look. Shortly thereafter, a bowl of stale bread fried up in eggs joined the tomatoes, and, feeling a piece of the stuff being placed into my hand under the table, I regretted our deal. On her third return to the table, the enthusiastic neighbor announced that her name was something sounding like “Jan-da-reh” and, in the unexplainable way of words + gestures, managed to convey that she knew we had more people at home, and so we needed to go get “Pa-PA.”

A bit breathlessly, Girl ran across the street to get Paco and Pa-Pa, returning with them in tow. At this point, there were four bowls on the table, all beset by flies–an unavoidable reality (unavoidable so long as the modern technology known as “screens” remains untapped) in this region in August. Finally, after her extended bustle, Jan-da-reh sat down, panting. In short order, we learned her husband’s name is “Hassan,” and she has five children, all living far away and in different towns, and that she is the proud owner of the donkey that goes into ear-splitting spasms on a two-hour schedule. Every few sentences, she used a word that sounded like “komshu”; later, I looked it up to discover it is kom?u and means “neighbor.” Yes, yes, we were definitely soaking up A Very Particular Kind of Neighborliness and feeling warmed inside by being told, by somehow understanding her Turkish, that we should come outside her gate everyday and call “Jan-de-reh! Jan-de-reh, çay, çay!” and have a regular sitdown with her.

And then the headscarves came out.

Beckoning me to her and holding up a scarf edged in beaded lace, Jan-da-reh lassoed my skull with a deft touch, wrapping the ends around my neck. She stepped back, regarded me, and clapped her hands with delight.

Feeling mature enough not to mind being her plaything, I smiled and acted Natalie Wood in West Side Story. Turning to my husband, Jan-da-reh asked him if he didn’t think I was a regular “Fatima.”

Feeling mature enough to play along with my attempt at feeling pretty, Groom nodded and smiled appreciatively at the make-over she’d wrought on his harlot infidel of a wife. Why, with me all scarved up like that, he could see the benefits of having a modest woman at his side. One so modest would bring acclaim to his name, raise up some hearty children, and fry up some fierce egg bread!

Mostly, I rued the fact that I couldn’t point out how jarring it is to drape an aging bookworm in a tablecloth. I also rued the fact that Jan-da-reh called out the universal word of “photo” and tossed Girl back out into the street to retrieve our camera from the house. 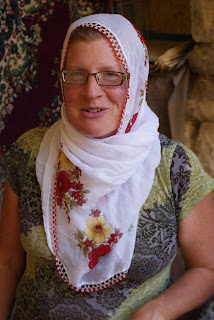 You know what’s more jarring than a bespectacled English major capped by grubby linen? When that same Hamlet reader is told that the head scarf ONLY costs 20 lira, payable upon exit through the gate.

Unsure of the proper cultural response to this unforeseen business proposal, Groom and I launched into the couplesspeak made up of frantic eye-catching and hissed whisperings of, “Do we have to buy it? If we don’t, do we get stoned?” At one point, I decided we had to make the purchase in order to assure good neighborly relations, and so I murmured to Groom, “My mom could wear this over her shoulders to the country club or something. I’ll just give it to her as a present.” Groom still wasn’t certain, looking properly discomfited.

And then the beaded necklaces came out.

Quickly snapped around each child’s neck, the necklaces were much praised by all, many thanks were uttered…and then the price of five lira each came out.

Somehow, at the same time, Jan-da-reh also threw some of the Turkish mainstay called “pekmez” (basically, a molasses made out of grapes…terrific stirred into yogurt or put on bread) into a jar and ladled three teaspoonsful into my husband’s mouth.

Fortunately, Our Delightful Neighbor’s pushiness hit a critical mass with me, one that allowed me to overcome the blight known as Minnesota Nice. We stood up to leave, offering up many thanks for the food and tea, at which point we declined any and all opportunities to support her donkey’s need for feed.

Looking crestfallen, Jan-da-reh attempted to lay guilt upon our heathen souls, but we pushed past her, out into the street, where the manure-tainted air of her donkey’s tethering post served as a welcome relief.

Two hours later, our friend Christina arrived in the village for a visit; as we stood in the street, chatting, Jan-da-reh bubbled out to shout a loud HALLO. Christina, an expat of seven years in country, had a quick exchange with her before turning to us to say, “Oh, gawd. That woman. I should have warned you about her. She does this thing where she lures tourists in and then sells them crappy overpriced socks, which they’re willing to pay for just to escape her clutches. A couple years ago, she was even on the news, bragging about how she does this. If she ever comes near you, run.”

Equally reassuringly, when we retold the story to another expat, this one with twelve years (and three husbands) in country, she was shocked and could only utter, “But. that’s. so. rude. How dare she? Don’t worry: that wasn’t anything that could have been a cultural violation on your part. She’s just awful, that’s all.”

In a simple world, the story would end there, with everyone condemning Jan-da-leh as a greedy viper. However, and I actually like this best of all, she remains completely undaunted. It’s as though she gave us a run, and we set down a boundary, and now she’s free lay the hell off.

Tonight, as we sat outside the wine shop, having tea as guests of the owner (and doesn’t he appreciate our business?), she breezed past with a plate of lemon cake, probably meant as a donation to the iftar meal (the night time dinner that breaks the fast during Ramazan) that is offered up for men who don’t have families. Blowing us huge kisses off the tips of her fingers, she slowed down long enough—not to call out an ensnaring “Hallo,” but rather to break off a chunk of the cake and place it onto our table. Babbling away, she gave us a “merhaba” and a “çok,” and in between, there flowed a stream of words that managed to mean both

Thus was our introduction to the concept of “kom?u” in our new home. 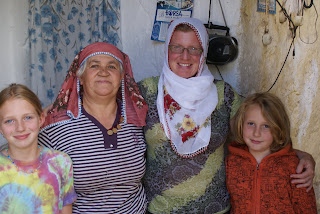