Tales from the Harem

“Tales from the Harem”

Before we came to Turkey, I read a book of essays written by expatriate women about their experiences living outside the familiar. In many ways, the book was illuminating, as it lent real voices to real experiences and gave me a sense of what I was heading towards. About 15 essays in, though, I realized the women’s stories were lapsing into predictability and that I was starting to find the rhythms and topics of the essays cliched. At one point, I actually hollered at the book, “Aw, fer crud. REALLY? Another ‘…then I went to the hammam for the first time, and it was intimidating until I realized I’d just undergone a rite that initiated me into the private culture of Turkish women’ tale?”

1) move to new country with great excitement;
2) once excitement wears off, cry for awhile;
3) eventually, dry tears, throw back shoulders, and decide to work at becoming part of the new place;
4) some weeks or months or years later, have epiphanic moment, often while naked in a Turkish bath with 18 other women, none of whom have pubic hair while you do, that reminds you people are people wherever you go, and all of this cements your sense of belonging in this new home.
5) stay forever, confident that you’ve finally found the true home of your heart

6) …until you maybe return to your home of origin eight years later when you realize ain’t no one ever going to understand you like the peeps of your native land.

Naturally, ex-pat writing tends to follow this format because there is a predictable process of assimilation and acculturation that happens in such situations. However, I’d also argue that there’s room for a little more critical thinking about who ex-pats are, where they come from–literally and figuratively–and what it is about life in a purposely adopted country that holds appeal. Clearly, it is disingenuous to intimate that there is a simple process common to everyone who consciously decides to leave behind his/her birthplace.  Some are leaving behind a system of government that rubs wrongly; some are leaving behind people who deflate them; some are heading towards love; some are heading towards the adventure inherent in The Unknown; some are heading towards a blank slate that allows for personal redefinition; some are leaving behind roles set too firmly, heading towards freedom from expectation; some are craving the isolation that accompanies living in a place without connections; some head off for no deliberate reason and discover they prefer the people they become in the new place; some discover that they feel competent, capable, complete in a location severed from a place where they felt incompetent, incapable, incomplete; some start out with the notion of traveling, randomly decide to stop somewhere for awhile, settle in without ever making a direct commitment to the place, and a few years later realize absently, “Huh. Looks like some years have passed” before drifting through another decade…or, alternately, wanting to move on but no longer knowing how rejoin the world they passively opted out of.

No matter how it’s sliced, the geographical fix offers up a fascinating study in human behavior.

All of that complexity noted, there is information to be gained from a broad overview–as in the memoirs and essays I read–of certain generalities.

Here’s what we’ve seen in Turkey:  as far as expats go, the vast majority are women who traveled here to see the place, landed Turkish boyfriends, and didn’t object to the role that cast them in (the whole Madonna/Whore split plays out pretty radically here, with Turkish men searching for expats for girlfriends while simultaneously planning their futures with Turkish wives).

Here’s what I haven’t seen in Turkey: expat men with Turkish girlfriends. In fact, we’ve only encountered one expat male, an Austrian, who has a Turkish wife, and she’s notable for being, as people report in hushed tones, “from The East” (…of Turkey, near Iran and Iraq, where the world is a dramatically different place, both in terms of deep conservatism and fighting with the Kurds). She’s even more notable for being a Christian and for being, we believe, Kurdish–although this last fact isn’t something we can ask outright (doing so would be akin to sidling up to a seeming Caucasian man waiting for a bus on a street in Mississippi in 1952 and asking pointedly, “Are you by any chance actually a Negro?”). That she is the only Turkish woman we’ve met who is married to a non-Turk seems a minor afterthought.

Our new friend Elaine is 35 years old and on her third Turkish husband (this, in itself, proves how quickly holes are poked into generalizations; she’s an expat whom three different Turkish men have seen as more than girlfriend material, perhaps because her commitment to culture, values, and language has slid her into a status of actually Being Turkish and not just Someone Who’s Here for The Lovin’).  Elaine maintains, based on no small amount of informed wisdom, that people who choose to leave their homes and families, who refashion themselves as expats, are all “broken in some way.” In her case, the brokenness lies in her relationship with her mother. In other cases, the break is in self-esteem, aspirations, respect.

For me–not exactly an expat since I’m engaged more in a year of “lark-ism followed by a definite date of return to a place and people I love”–this opportunity is a time of observing people, gawking at beauty, soaking up new sounds, and finding my feet in the sand.  The bonus to spending a longer-than-a-two-week vacation here, I’m finding, is that I don’t feel compelled to meet this place with the “Oh, isn’t this beautiful, and aren’t the people all wonderful?” thinking that is the hallmark of many highly-evolved tourists.

Because a lot of Cappadocia isn’t beautiful, and a lot of the people aren’t wonderful, it makes me glad to be here.  Once the glossy cover is ripped off, all the best content is revealed–and long-term visitors and expats alike get to appreciate the subtleties.  For example, the other night, I was walking through a highly-touristed village and talking to an expat American woman who’s lived in Turkey for nine years; I asked her, “So what do the natives think of all these tank-topped, shorts-wearing, camera-toting beer drinkers?  I don’t mean the shop and restaurant owners, necessarily, as it’s in their interest to be okay with the tourists.  But what about that traditional village grandma there, in the headscarf, trying to marshal her grandson through the crowds?  Is she just pissed off inside at all these dumb people taking over her space in the world?”

I loved the answer.  American Expat pointed out, “That thinking of ‘oh, the natives were so innocent and led such pure lives before the place was infiltrated by Bad People’ is always crazily flawed.  It’s such a product of an educated leisure culture to want to look at changes in a place and call them ‘destructive.’  If you think about the history of Cappadocia, it’s all about new people coming in and overriding the way things were.  It’s all about one set of ideas hitting against another set of ideas, and new people coming in and settling and adding their own flavor.  The place is a mosaic–and never forget that this was the hub of the Silk Road here.  In all of its remembered history, this has been a place that has been smart enough to welcome commerce, channel it, and weave new ideas into the fabric.  So when you look at Grandma Headscarf there, never think she’s upset with the tourism.  The entire foundation of her worldview is about not questioning why the newcomers are here but, instead, embracing them for what they add to the mix.”

That right there is totally the kind of explanation that makes me want to put on a tank top and have a beer.  I abhore “pap” and guilt-based thinking, wherein wide-eyed ingenues write essays that exclaim “‘…then I went to the hammam for the first time, and it was intimidating until I realized I’d just undergone a rite that initiated me into the private culture of Turkish women’.”  Rather, I’m more a fan of the Silk Road line of thought, which makes room for grit and passion and spices and worms and stacks of gold coins rattling around woven saddlebags.

Thus, on the one hand:

It is Unflinchingly-Positive Tourist Thinking that urges me to announce that I luff, luff, luff two village girls whom we’ve dragged home a couple of times.  With very limited English, they’ve played ball, taught us Turkish vocabulary, made snowmen of Play Dough, and reminded us that we don’t wash our hands enough.  I don’t need to understand all the words of nine-year-olds Yasimin and Cansu (pronounced “Jon-Sue”) to know they’re a couple of class acts: 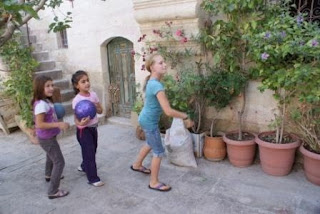 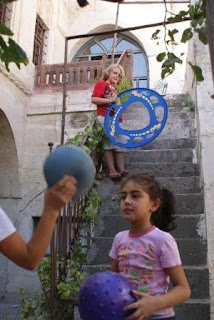 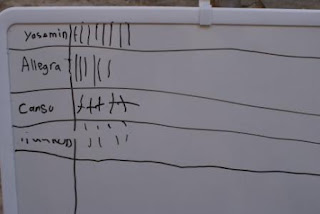 Cansu’s grandma lives next door and wanted to come visit, so Cansu took about eight painstaking minutes to walk her bent-over babaanne up the stairs to our table. 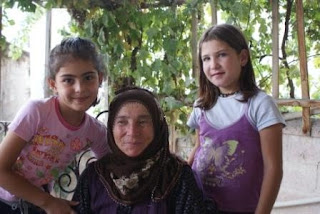 On the other hand…

It is Silk Roadism that allows me to announce that I found the following cadre of neighborhood girls to be a serious pain in the arse.  At first, we tried to be friendly… 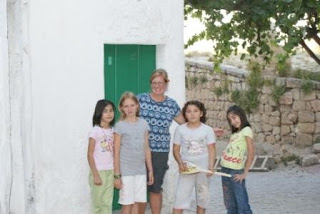 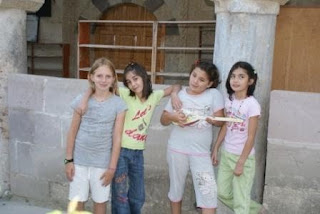 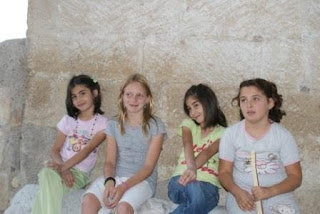 …but after only a few minutes, both Girl and I knew that these girls were coarse and raucous and Just a Leetle Bit Too Much.

Fortunately, because we don’t subscribe to Shiny Happy People thinking, I was able to walk away from the encounter and whisper into my daughter’s ear, “Crikey, but they were annoying, weren’t they?  I’m all about dodging and weaving and dropping to the cobblestones when next we see them.  Oh, yea, and good job whupping them in the footrace… Little life lesson here:  if you don’t like someone, it feels really, really good to trounce them in some fashion, dunnit?  Just look at how there are Muslims here now in this area that used to be all Christian.  Yea, like that.” 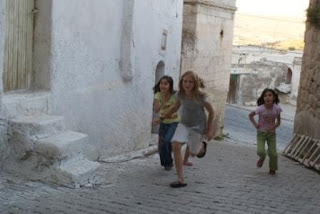 From the simplicity of a footrace to the entanglement of religious history, in the space of a thought.  Sounds like an expat essay to me.

Expats R Us, I actually don’t like all kids

17 responses to “Tales from the Harem”