The Women–With the Exception of Your Humble Author–Truly Are Chic, and the Fact That Nearly Every One of Them Was Wearing Knee-High Black Boots Almost Blotted Out the Fact That We Couldn’t Find Internet Access Fer Nuthin’

“The Women–With the Exception of Your Humble Author–Truly Are Chic, and the Fact That Nearly Every One of Them Was Wearing Knee-High Black Boots Almost Blotted Out the Fact That We Couldn’t Find Internet Access Fer Nuthin’”

All apologies to the complex and fascinating country of Turkey,

but when we got off the plane in Paris, it was like the start of five days of shore leave. We were giddy. Suddenly, it felt like we’d been shipped away from a barren outpost and dropped into a city of twinkling lights, crusty bread, layered pastries, stacks of books, straight streets, even walkways, sophisticated fashion, neon-leafed trees–a place with a sense of plan, organization, elegance.

Our first afternoon in Paris, we figured out the train system enough to get to our hotel; because the city is prohibitively expensive, especially for a family of four on one partial income, we had put in hours trying to find the cheapest option. Eventually, we happened upon the chain of “Hipotels,” specifically the one near Joinville le Pont, which, fortuitously, turned out to be a charming section of the city much like the Linden Hills area in Minneapolis. After checking in and appreciating firsthand the spare reality of “basic accommodation” (ah, but towels were provided, in contrast to our recent Istanbul hotel), we headed out for a meander around the Joinville area. First we passed the green grocer (Endive!); next the cheese shop (A mind-boggling palette of fromage!); then the first boulanger (Pain au chocolat!); followed by the second, third, fourth boulanger (Macarons! Baguette! Tartelette!); then the hair salons (Should one desire une coiffure tres jolie!)…and on and on until the grocery store (Crackers! Applesauce! SALTED BUTTER!).

Between the chocolate and the booze, it’s like they invented the place just for me.

The interesting part is that I’ve been to France a couple of times before, and it left me shrugging with a noncommital, “Eh. It was okay.” I had been put off by getting terribly lost the first visit and then being treated snootily the second time. This time, though? I was smitten.

Thank you, Turkey, for the perspective that allowed me to leap around gaily, doing high kicks all the way from L’Arc de Triomphe to the Place de la Concord.

As we rode the on-and-off double decker bus the first couple of days, and as we used our five-day Metro passes to get around, and as I felt like dancing a la Gene Kelly in ANCHORS AWAY, I thought about how easy this year would have been if we had chosen—if we could have afforded—to live in a country like France. I’m glad we didn’t and couldn’t. While Turkey is a relatively Western and familiar-feeling culture, compared to, say, Iran, it still stretches us. When we are in Turkey, I feel disconnected from everything that makes me feel easy inside: in our daily lives, we aren’t surrounded by people who read books, who drink espresso, who have a vigorous Life of the Mind, who sit–genders intermixed—and converse for hours over intricate food. In Turkey, men get up, leave the house, and don’t come home until they feel like it, often after 10 p.m. In Turkey, men love children but spend little time with their own. In Turkey, our village’s main street and square are completely the domain of men who drink tea and gossip all day (this is them at “work”). In most of Turkey, no one goes out for a run. In rural Turkey, life for the women is about scraping and roasting seeds out of squash, about putting up tomato paste, about making pekmez, about doing handiwork. In short, in Turkey, we can never fully relax because we are outside observers and queer objections of observation ourselves.

I’m deeply grateful for this. I’m hugely glad we landed in a place that is further down the “foreign” continuum than, say, France. In France, we would be more comfortable, plunked into a place that makes easy sense. However, simply moving from one leisure culture to another would have yielded lighter rewards than a year in a place that feels less natural.

Thus, these last few days, as we’ve gasped from the top of the Eiffel Tower, oohed at the gilt of Versailles, moaned with pleasure at every bite of ham, marveled at the array of talent on display at Monmarte, ahhhed at the Mona Lisa, and gone goggle-eyed with people watching on the trains,

I’ve not only thanked Turkey for making me ripe for shore leave in France.

I’ve also thanked France for renewing my gratitude toward Turkey.

Except for the part about there only being unsalted butter in Turkey. That’s always gonna suck. 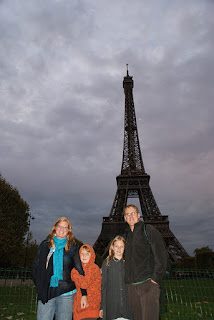 all hands off deck

11 responses to “The Women–With the Exception of Your Humble Author–Truly Are Chic, and the Fact That Nearly Every One of Them Was Wearing Knee-High Black Boots Almost Blotted Out the Fact That We Couldn’t Find Internet Access Fer Nuthin’”