one overnight trip on a bus from Cappadocia to Istanbul;

a day in Istanbul of visiting an ancient church with tremendous golden mosaic remnants on the walls;

one night in Istanbul;

five days in Paris, replete with macaroons, The Eiffel Tower, The Louvre, an on-and-off bus tour of the entire city, some hours at Sacre Coeur watching buskers perform, a trip around Monmarte to view artists at work, an afternoon in the historic and jaw-dropping spaces of Versailles, an after-dark hangout in front of Notre Dame so as to watch the shadows dance amongst the gargoyles and filagreed architecture, shopping along the Champs Elysees, repeat visits to street crepe stands, a passle of hours in Paris’ floral park (a place featuring no less than four playgrounds), unlimited passes to public transportation;

a trip under the English Channel;

a night near the station where Paddington Bear gained legend;

three nights in a hotel with a swimming pool and breakfasts of Rice Crispies and Cumberland sausages;

two days of rides and fireworks at the much-hallowed Windsor Legoland;

another night in London to sleep in a room with bunkbeds and then take in the science museum, ride the London Eye, and visit the home of The Queen;

another trip under the sea by train;

another night in Paris, during which the final Hannah Montana episode is watched;

then again to Istanbul for some big city hustle;

finally a flight back to Cappadocia.

the coolest thing of all was the toilet on the Eurostar train through The Chunnel.  See, you flush it with your foot, by pressing down on a button on the floor.

for less than a quarter of the cost of the whole vacation, we could have installed a new toilet in our house, one that flushes with a press of the foot, and given the little buggers a daily thrill surpassing an up-close-and-personal view of The Mona Lisa. 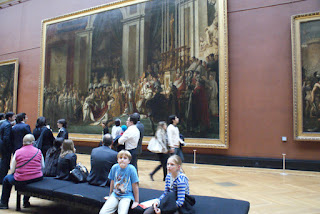 gadgetry trumps travel, i have to admit i enjoyed flushing it too

16 responses to “You Know How People Broadcast Images of Glowing Fires on Their Television Sets, Rather Than Sitting in Front of an Actual Fireplace? Right About Now, I’m Left Feeling We Could Have Broadcast Images of The Eiffel Tower on the TV, and Our Kids Would Have Enjoyed It Just As Much”