Thank you so much for the lint remover. I didn’t know such a thing existed! Maybe because I’ve been really busy combing my feathered hair with a huge plastic comb under the disco ball at Skate City! Before your gift, I didn’t realize how much all my sweaters needed de-pilling! And trust me, since it’s 1980, I have a serious number of velour and cowl-necked sweaters that need shaping up before Pat Benatar will ever ask me to be in one of her videos!


So thank you for the most radical Christmas present ever, except for when my mom gave my sister and me matching teddy bear nightgowns last year, and do you think she knows I’m 13 now? Enuf of the good times; gotta get to de-pilling—


You better watch out–you better not pout! Because video killed the radio star!


Jocelyn
——————-
Clearly, even though Aunt Ethel and Uncle Frank are, in fact, real, and they did give me a lint remover one time, I never actually wrote this particular thank you card.

Number one, I hardly ever went skating at Skate City except for every weekend, and, number two (haha! “number two”!), I never genuinely wanted to be in a Pat Benatar video, unless you count “We Belong.” Oh, plus “Love Is a Battlefield.”

I can’t be faulted. You saw the gloves La Benatar wore. You saw that toilet paper-looking skirt. Without question, you would have elbowed me in the solar plexus—(wherever that is! But remember that grade school song about the cat on the roof top, “Señor Don Gato,” who was trolling for the lady cat that was “fluffy, white, and nice and fat,” and that song had “solar plexus” in the lyrics, which was a pretty hilarious thing to be singing out loud in elementary school?)—to take over my role in the video, if it meant you got to wear a toilet-paper skirt, too.

Soooo. My point was that I never wrote that thank you card, but at the same time, that’s exactly the thank you card I wrote for about 15 years. The idea that every gift deserves a formalized expression of thanks was inculcated into me, gently, at a young age, by my mother. Christmas would come. Gifts would be opened. I’d spend the next three weeks scratching out one painfully-wrought line after another until the space inside the card was full enough that I could sign off. Virtually every thank you card I wrote throughout adolescence started with a salutation followed by “Thank you for the _______. I will use it ________.” Then I would vamp for a few lines and get the hell out of there so I could meet my friend Joni at the mall for an Orange Julius.

It was only when I stopped feeling the pressure to write thank you cards that I became truly grateful. There are several ways to read the previous sentence, but what I mean is this: when one sidesteps the burden of engraving gratitude in response to something gifted at least partially with the expectation of receiving thanks, what emerges is room for Real.

If I am not clawing at wrapping paper and simultaneously strategizing, “I hope I can whip out a thank you note by next Monday because I have essays coming in that afternoon, and I can’t even pretend to be excited about a doily Kleenex cozy when I have 50 papers to mark,” then I am free. I can like the gift. Or not. I can send on a note at a later date. Or not. I can feel what I feel, with no obligation to the exhausting politeness obliged by etiquette.

Rather, I can wait three months and then pen a long note full of random nothingnesses, ending with a “You have no idea how profoundly the book you gave me has affected my thinking. With one quick trip to Barnes & Noble, you set something in motion inside of me that won’t find answer for years to come. Because you were thoughtful and invested something of yourself with me in mind, I will never be the same.”

Alternately, I can wait five years and never go beyond hanging my jaw open at the fact that someone saw a poster of a kitty hanging onto a tree with the words “Hang in There” on it and thought of me.

I can allow my reaction to flow, unadulterated, unconcerned with proper form, out of my heart.

Which is exactly why I’m finding it so difficult right now to placate the pounding within me that demands I shape into words some of the most boundless, heartfelt gratitude I’ve ever experienced. That the recipient has no desire for my thankfulness makes its expression all the more natural.

You see, the person who gave direction and inspiration to this sabbatical year for our family has just left Turkey and returned to life in the United States. Last Spring, when four different possibilities for living abroad had fallen through, and we were feeling discouraged and without hope, we followed a random connection and sent a woman named Christina an email, telling her that we were willing to head most anywhere, but with children in tow, we’d feel profoundly more willing to plop down somewhere if we knew we’d be greeted with a welcome and some help with the transition. Traveling “blind” is an easy part of the adventure as a singleton, but with young kids, we hoped to leap towards a tightrope underwritten by a safety net.

Within ten hours of our initial email to Christina, we had a response, full of enthusiasm and willingness to be our go-to gal. In that first message, she combined wisdom (“I think anyone who wants to spend extended time here needs to be prepared to be relaxed, easy going, persistent, and ready to learn a whole new concept of what those things even mean.”) with zest (“…choose Cappadocia, it’s fantastic!”). Her attitude felt like magic; we bought tickets to Turkey within days. Later, when the time came, and we showed up in Cappadocia, it was Christina who met us at the airport in a huge van she’d booked specially to help accommodate our luggage. Because our arrival happened at night, in the middle of a heat wave, she had us in the pool at our pension within two hours of landing while she hoofed off to buy us gözleme (a kind of village food—sort of like huge tortillas stuffed with spinach, cheese, potato, or Nutella) for dinner. In the ensuing weeks, she let us stay at her house, worked her every connection to find us a home, introduced us to sixty-eleven people, taught us to negotiate the transportation system, helped us outfit the house with furniture, and, most importantly of all, made us feel seen in a place where we were invisible.

In recent months, seven years after she first moved to Turkey, Christina had been realizing that part of her personal journey required leaving the Near East and re-meeting the places, relationships, and Western culture she had willingly left behind in her mid-thirties. Quite astutely, she framed this step by saying that she had been feeling as though she and Turkey been running hot and heavy with each other for some years, but at the same time, they had started getting the sense things were over between them and that it was time to find the courage to end the relationship, an act that required self-honesty, a certain amount of melancholy about good times past, and a willingness to look forward to a bidding future.

I knew how spot-on her decision was when even my inner Raging Toddler could only whine sleepily that she. didn’t. want. Auntie. Christina. to. leave. Mostly, my awake adult self had to applaud—had to support a healthy decision made by someone I loved. So we helped her toss things into the trash can, marched away with her bottle of vanilla extract (among seven hundred other bits and bobs), and only cried a little bit the day before she left.

What I didn’t know how to communicate to her, as we stood near the trash can that last day, exchanging Turkish kisses and American hugs on the eve of her departure while intermingling tears, was a proper thank you. What’s more, in this case, unlike with the lint remover, I was buffeted by a tempest of gratitude that I couldn’t tame into a tidy note—although no one would have appreciated a Pat Benatar reference more than Christina, Fellow Child of the ‘80s.

If I were 13 again, my best effort would probably yield little more than a


Thank you for the motivation to move to Turkey. I will use it for the rest of this year.


Before your gift, I didn’t realize how much I was ready for a perspective shift! And trust me, since it’s 2010, and I listen to mainstream news sources, I have serious perspective issues that need shaping up before Jon Stewart will ever ask me to be on his show!


So thank you for the most radical sabbatical year present ever, except for when I gave birth to Paco last time around, but who wants to have a baby every seven years, especially when she’s in her forties? Enuf of the good times; gotta get to listening to the Call to Prayer—


You better watch out–you better not “Ma?allah”! Because Allah had his ekbar!

In point of fact, that immature note does the job.

P.S. You have no idea how profoundly the confidence and welcome you gave us has affected my thinking. With one quick email from Turkey to Minnesota, you set something in motion inside of me that won’t find answer for years to come. Because you were thoughtful and invested something of yourself with me in mind, I will never be the same.
—————

However, 43-year-old Jocelyn also insists on one further post script:

P.P.S. You know how you always talked to ten-year-old Girl like she was your best friend, and you couldn’t wait to be with her? You know how you always insisted on getting in Paco’s face when he was feeling scared and shy and out of his element—on giving him both a bad time and Turkish kisses? You know how you provided me with a much-needed external processor so that I had the solace of a girlfriend? You know how you were able, so often, to be the Person in the Know so that Groom didn’t always have to? You know how you hollered down that slimy cab driver after he cheated me for double the fare? You know how you, on the sly, ordered out for a birthday cake for Groom’s early 40th celebration? You know how you found closure with people whose personal damage had caused them to cut you to the quick? You know how you went on that yoga retreat and suddenly realized that you’re on the verge of meeting your new self for the first time? You know how you embraced our wayward little family and launched us on a year of discovery? Once you know all that, then there is only one thing I can say:

Now enjoy Madison. Enjoy the hot water coming right out of the tap. Can’t wait to see you next year. We can go roller skating and comb our hair under the disco ball at Cheep Skate together. I’m totally asking you to be my partner for Ladies’ Choice. 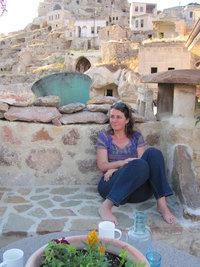 lint removers, thank you notes, trying to express what can’t be