Our Minnesotan friends Pamm and Ed have been touring Turkey the last week or so and are on their way to spending a few days at our house. Based on Pamm’s quick emails of update, I’d say they’re getting the full Turkish experience, wherein everything they expected hasn’t been delivered, which then makes space for them to be surprised by what delights them. More than anything, for good or bad, they’ve been struck by some glaring inconsistencies—which we, after four months here, make us nod our heads knowingly. For Pamm, she couldn’t believe that they were staying at a luxurious 5-star hotel that only served instant coffee. For us, we have remarked that:

–The tenet of Islam pertaining to purity and cleanliness apparently extends only to the body (ritualized ablutions are a part of every prayer and must follow all intimate relations, not to mention the ubiquitous use of Lemon Cologne, an 80-proof rubbing alcohol poured over one’s hands multiple times a day) because it is no rare thing to see a man in a skull cap cradling his prayer beads as he tosses an empty cigarette pack to the ground. Recently, on a landing next to the mosque across the street, someone tossed out six rusty stove pipes. At least it’s a place where their disintegration will undoubtedly be hastened by the blistering decibels of the Call to Prayer. The entire landscape is littered with empty olive oil cans, plastic bags, rotting squash and loaves of bread, broken ironing boards, unwanted bed frames, shattered beer bottles, partially drunk liters of Coke, cracked cinderblocks, abandoned shoes, dead trucks, and ripped hoses. The first time I gave Groom directions as to how to find a nifty ancient church that I’d stumbled across, a key point to those instructions was, “When you encounter the big pile of mildewing sweaters in the middle of the road, you’ll know you’re on the right track.” 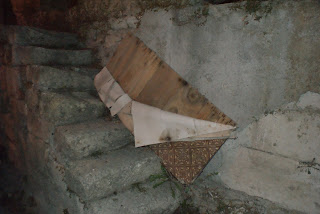 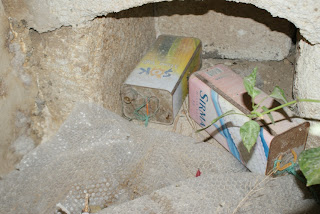 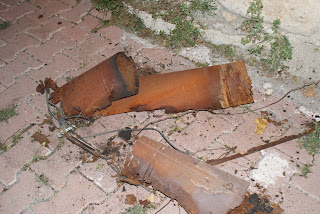 –Our 70-year-old neighbor who wears at least one, if not two, headscarves at all times and is always covered from head to toe in modest draping handed my husband the gift of a bowl of home-dried raisins covered with a newspaper. On that sheet of newspaper was a scantily-clad Warrior Goddess model with her Fierce Lady Bosoms exposed to the readership–and to raisin eaters who can’t help but imagining they’re chomping into nipples with every bite.

–Turkey, in particular the Cappadocia region, is one of the most continuously-inhabited pieces of land on the planet, a fact that might lead one to expect a that modern-day Turks would have a command of history and an elevated civilization in terms of music, art, literature. However, and with many exceptions, most Cappadocians rarely read (outside of the newspaper), think of mass production as the height of art, and have never touched a musical instrument. Even more surprising is the disconnect between the evidence of previous inhabitants and the knowledge of who they were or what they were doing. Certainly, there is a general sense of the various eras of history (the Hittites, the Phrygians, the Byzantines…), but those seeking a comprehensive archeological explanation are stymied more often than not. When our family hired a spendy nationally-licensed guide for a day tour around the region (we knew he was the real deal because he sported an ID card on a lanyard), he earned our respect due to his unwillingness to fabricate facts, as so many of the unlicensed guides do. When we toured the underground city of Kaymakli, which is thought to extend for eight stories under the earth, the guide was well able to shine his flashlight and point out rolling stone doors, rooms where fires had been used heavily for cooking, spots where grapes had been stomped…but as to the overall purpose of the underground city, he, like all authorities, was uncertain. Such cities might have been built for protection from invaders. Or possibly for storage. Or maybe for some-time usage. Or, alternatively, for long-term usage. Perhaps in the winter. Or summer. In truth, the lack of certainty about these underground cities is refreshing, as too often archaeology seems to lean towards the satisfactions of pat storytelling over the ambiguities raised by science. On the other hand, when the guide pointed out a doorway full of sand and noted, “It’s thought there are many more levels below this one which have never been touched or looted, which might be full of eye-opening artifacts, but no one is certain,” it was all I could do not to holler, “Give me a shovel and a month, and I’ll make a huge dent in deciphering this joint, Mustafa!”

As we exited Kaymakli, Groom pointed out, “We seem to run into this again and again here: it’s like the realization that something could be opened up for tourism took priority over the need to figure out the place first. If each site were properly excavated, made sense of, and then packaged into presentable information for visitors, we wouldn’t always walk away with more questions than we came in with.”

Of course, he was an anthropology major, so it’s in his training to crave pottery shards.

What surprises me more than anything is that this country existed under refined Ottoman rule for hundreds of years, and then the forward-thinking Ataturk came along and “modernized” things, yet there’s not a bookstore to be seen for three hundred kilometers.

–The men wear suit coats when they work in the fields. (I know this can be seen in countries around the world where formality intersects with the need to hoe, but it still makes me wonder why the ill-fitting suit coat can’t be hung from a nearby tree while the hoeing takes place)

–We live in a region that’s just emerging from subsistence living, yet it’s amazingly hard to find a whole grain. Semi-relatedly, can we just take a minute here to chuckle over the fact that it is possible to find brown rice (par for the course, it’s nearly inedible) in a few Turkish stores, but it’s called “diet rice”?

–The New York Times ran an article last summer touting Turkish food as a “world cuisine,” but our experiences in restaurants have been, by and large, deeply unsatisfying. Or, as my pal Pammy put it in email, the food “beggars description.” Fortunately, she didn’t let that daunt her and went on to attempt description of the challenges of tourist food for a person with a deadly allergy to anything in the nightshade family: “One night the only thing left on the buffet after the Germans and Russians went through that wasn’t smothered in eggplant or bibers (peppers) was french fries, spaghetti noodles, and white rice with some fragments of honey drenched desserts and bread. All cold and all bad.”

Ultimately, highlighting contradictions begins to feel like condemnation, and that’s not my purpose. In point of fact, I feel defensive of Turkey and think pretty much everyone’s lives would be richer for having experienced it.

What’s more, as soon as Pamm half joked that Turkey leads with contradictions, my first reaction was to agree…but my second reaction was to think, “Yea, but what place isn’t? Personally, I come from a country where physical fitness is an obsession but where obesity rates are rising. Riddle me that one. Then there’s the fact that the U.S. prides itself on individualism, yet its most popular sports are football, baseball, and basketball: team sports one and all. And how about the trend of environmentalism which is laughable when pitted against the millions of cars on the roads? What about loudly-protesting Christians who spend more time in Walmart than reading to the blind? Want me to show you a ‘foodie’ in the drive-thru line? How about a doctor whose income trumps the Hippocratic Oath? Volunteerism for pay?”

This whole discussion highlights the intangible gains of travel: it reminds us that nothing makes sense, that there is beauty in the gaps between “should be” and “is,” that logic is inherently illogical when pitted against humanity’s vagaries.