Only five months later can I comprehend the shock that overtook me when we arrived in Turkey. Had we first stopped in Istanbul, the landing might have been softer and felt more gradual in terms of West-to-East, but since we flew straight to Cappadocia (one hour flight from Minneapolis to Chicago; ten hour flight from Chicago to Istanbul; one hour flight from Istanbul to Kayseri; one hour shuttle ride from Kayseri to Goreme) with only small lulls in between each leg, we showed up in this Land of the Past feeling tired, excited, expectant…and found the place vibrant and laid back and full-of-more-yet-less and crazily-foreign and HOOOOOOOOOOT.

Indeed, I only feel just now that I’m recovering from that August heat and the weird, off-kilter sleep deprivation. It’s like the 110 degree temperatures, unrelieved by air conditioning, sauteed any rational or predictable reactions. Even now, still in the midst of the experience, I can look back on August and think, “Who was that woman, stumbling around the broken cobblestones, attempting to orient herself and hone in on some sort of context while mopping the sweat out of her armpits? She was a leeeetle bit scary.”

In significant ways, I’m still that woman, but at least now I’m wearing long sleeves and the odd pair of mismatched socks. Perhaps more importantly, the sleep deprivation has eased since I generally wake up for about half an hour with the first Call to Prayer and no longer have to count myself as Awake for the Day Starting at 4:30 a.m.

But here’s the part of the process in which I’m reveling: we’re at the point of acculturation where we can say there are things in the villages of Cappadocia that we know we’ll miss intensely once we return home.

Trust me, the Call to Prayer at dawn is profoundly not one of them. Nor are the aggressive flies that triangulate their trajectories straight towards our retinas.

However, we’ve come attached to this volcanic, tufa-rocked, accordion-pleated, beige, hollowed-out landscape in ways that alter our heartbeats. We’ve had our breath arrested by the beauty that lives inside simple souls who may struggle to write their names but who would never leave us standing on the sidewalk in the rain, waiting for a ride that isn’t going to show up. We’ve seen our historical compasses become re-aligned around a region that has been more continuously inhabited than most others, that has hosted Hattians and Assyrians and Hittites and Phyrgians and Lydians and Persians and Romans and Seljuks and Ottomans and Turkmen. We’ve felt the whap of our jaws hitting the ground as we’ve peered into the thousand-year-old cave rooms beneath our 400-year-old Greek home. We’ve felt our knees weaken from the basket-view of several hundred meters high, inside the vantage point of a hot air balloon.

We’ve eaten fifteen kinds of peppers. We’ve seen women in their fifties who only recently have adopted a head scarf as daily wear–because they are certain, under the current government–that their sons in the military may live to see another day if they, as Mothers, adhere to conservative Islamic notions of dress. We’ve seen families making pottery in the same shops as their great-great-grandfathers. We’ve been touched by the attentive way young men in their twenties take stock of who is stepping onto the bus, hyper vigilantly moving their seats so that women and older men are assured of a place to sit down. We’ve spent long stretches of time in the nut and dried fruit shops where the owners scoop out sample after sample, insisting that we have at least a taste of every single of the seven varieties of hazelnuts. We’ve stretched our arms to the ceiling with delight when we step into one of our two heated rooms and feel the warmth smother the chill of the kitchen tiles.

We’ve grown a little addiction to a thing called yufka.

Circular, several feet across, thin enough to see through, yufka is an edible purse. Fill it with cinnamon, sugar, and walnuts, and it’s breakfast. Stuff it with cheese, and it’s lunch. Roll it around ground beef, and it’s dinner. Swipe in some Nutella, and it’s dessert.

Swaddle an infant in it, and he sleeps through the night.

Oh yea, it’s amazing stuff. Along the lines of phyllo-meets-tortilla, yufka is a versatile staple of village cuisine. It can be bought factory-made, in a package, or from a specialty shop where capable men wielding long wooden dowels roll the stuff out and sell it by the kilo.

But it’s best of all when made by the village women themselves, which we found out first hand one Sunday afternoon when we stopped by our friend Christina’s house. Her courtyard was full of women—her landlord’s family plus neighbor ladies, all working together for several days to lay in the year’s supply of yufka, stacks a few meters high— 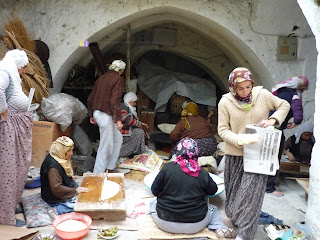 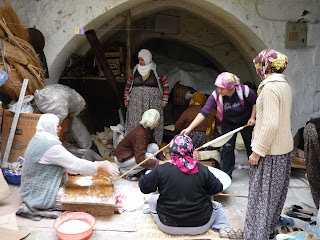 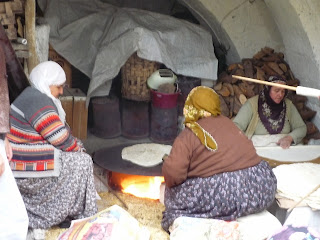 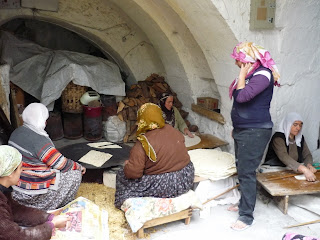 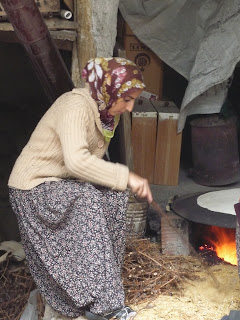 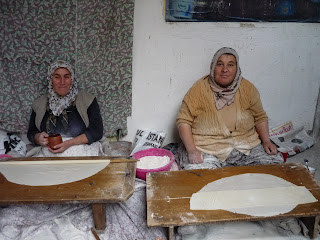 By virtue of standing around and watching, we each scored a huge, warm, hot-off-the-griddle piece of yufka folded into a wad of newsprint.

Moments later, though, back to tending their fires and sharing gossip, the women swirled around their communal task, hardly noticing us in the corner,

wiping the melted butter off our chins.

and you can use it as Depends