Responding to the waving arm of a village woman clad in the traditional clothing of shalvar pants and long white head scarf, the dolmus driver pulled over.  As the door to the mini-bus rolled open, the woman leaned inside and asked in Turkish, “Is this the bus to Urgup?”

“No,” responded the driver, “This is the Nevsehir bus.  The Urgup one is coming along soon.”

“Ah, okay,” the woman said as she removed her foot from the step, backing away from the bus.  At that moment, a buzz went through the first two rows of seats, amongst other traditionally-garbed women. Suddenly mutters of “Not the Urgup bus?” and “Going to Nevsehir?” and “Whoops, wrong bus.  Lemme off!” accompanied the bustle of several other women packing up their bags, re-adjusting their scarves, and making for the door.

Not even rolling his eyes with the exasperation to which he was due, the driver waited while they disembarked, wished them a good day, and propelled the dolmus back into gear.

As it turns out, Groom and I sorely lack that kind of placid lenity.  We are card carrying eye rollers, in fact, and our club privileges kicked in during those few rustling moments of “whaaazuh?” and “huzzabuzz” and “wherewegoin’?”  In fact, by the time the last woman had slipped her feet back into her sensible slides and exited the bus to wait on the roadside for the imminent Urgup dolmus, I actually had to take off my glasses and rub my eyes for a second.  Feeling a bit wonky, I blinked real hard-like until focus was restored. Then I dared a glance at my husband and gasped.  Who knew he was so damn cute?

Such are the dangers and benefits of Acute Ocular Elliptoid Circumvolution.  The eye roll–that bewitcher!–dupes one into certainty of superiority…even when one has been having a quiet cry over a plate of toast while bemoaning belly fat mere hours earlier.

Once Groomeo and I stopped with the eye whirls, we marshaled the energy to speak.

“How come,” I choked out, “every time we get on the bus,”–and here I stopped to wheeze a bit, simply for dramatic effect meant to punctuate nothing–“this happens?”

Running with it, His Groomishness chimed in, “I know.  We’re here in the village, picking up people who have lived here their whole lives, heading to one of two possible destinations, and there’s this vast confusion about which bus to get on.  Women hop on, get to chatting about how their knees ache, only to discover six minutes later that they’re on the wrong bus…”

Seeing my moment, I broke in with a, “…WHICH IS SO WEIRD, WHAT WITH THE DESTINATION BEING PRINTED ON THAT BIG OLD PLACARD IN THE FRONT WINDOW AND ALL…”

‘Tis true.  The dolmuses from our village either head to Nevsehir, or they head to Urgup.  In the front window of every dolmus is a big sign that says either “Ortahisar-Nevsehir” or “Ortahisar-Urgup.”  Even I, legally blind, myopic bi-focal wearer, can decipher the six-inch letters when the bus pulls up.

So, as they kids these days acronym so effectively, WTF?

the reality is all too easily explained:

Until relatively recently, Turkey’s requirement for mandatory education was built around five years of primary education (now students are required to finish out 8th grade, however). Factor into that a lack of busing, families that didn’t approve of educating girls, and overcrowded schools that offered half-day sessions so that a second set of students could come in during the afternoon hours,

and it’s amazing that these women are able to find the bus stop at all. 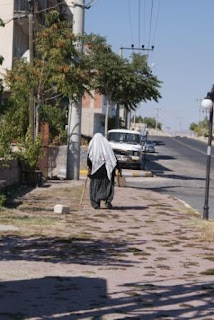 As the slightly-emptier bus rolled towards Nevsehir, and Groom and I reviewed our notes about the history of compulsory education in Turkey, Girl piped up.

“So, wait.  What are you talking about?”

Quickly, we briefed her.  In a final parental attempt to drive home the scope of this issue, I said to her ten-year-old self, “So basically, a whole bunch of people in Turkey, unless they were lucky enough to have special intelligence or a family with the means to send them on, stopped going to school after 5th grade.  Think of it this way:  imagine how much you wouldn’t know if this year of school you’re doing right now were your last, if you never again had to sit down and get your head around fractions and decimals, if you never again had your brain spin in the face of simple versus complex sentences, if you never again got to learn anything academic.  Imagine if 5th grade were the end of your learning.  That’s what we’re talking about:  people for whom 5th grade was the peak.”

She looked out the window at the garbage blowing in the wind.  Her eyes took in the crumbling houses, already eroding although only half-built.  She flashed back to hours spent in waiting areas, times when we muted the collected crowd by opening our bags and pulling out books.  She recalled that these hours in waiting areas took place in a governmental building to which her parents were required to make repeat visits because, with each visit, different workers offered up different versions of “I don’t exactly know the answer to your question.  I need to make a phone call,” and when the phone call ended, said worker offered up an entirely new explanation of what needed to happen.   Her active brain remembered all the times the cash register at the grocery store indicated we owed 12 lira, and when we would hand over a 20 lira note, it would take a minute of finger counting under the counter before change was made. She blipped to the street repair outside our house, when the entire lane was dug up to fix some pipes and then, a week after that job, dug up again to fix a few more.  And, of course, she riffled through the many instances of women getting off the well-marked bus once they realized where it was headed.

That single beat later, Girl’s sponge of a brain–so ready to absorb any input–had processed the information about Turkey’s former educational requirements, and her eyebrows shot up.  Matter-of-factly she noted,

greeted by our hoots of laughter,

“Well, that sure explains a lot.”

read the sign if you can, they also sell peppers in Nevsehir so stay on board