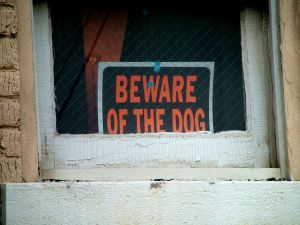 Animals Under My Feet:

Let me preface this entry by saying that I do like animals. We had two dogs and a cat in our household as I was coming up, and the dogs in particular were my special pals. I would hug and seek solace in them as I shed quiet tears to Steve Perry singing “Open Arms” after all the boys I had crushes on weren’t impressed by my gauchos and clogs and therefore didn’t like me back. The dogs and I? Sympatico.

However, nowadays my puppy time has changed tenor…

Because we have kids living in our house (they happen to be ours), we have a whiteboard easel set up in the tv room. After a run the other week at Hartley Nature Center, I was compelled to write on the easel:

Jocelyn’s “Why I Had to Scream on My Run” Scorecard

This scorecard raises two issues of mini-crisis for me:

1) I don’t care if your wet and foaming-at-the-mouth 70-pound black lab is “very sweet, and he wouldn’t hurt anyone.” Don’t tell me that as your d*&% dog has its paws on my shoulders and is attempting to teach me the doggie quick-step for our appearance on “Dancing with the Pooches.”

Instead, keep your dog on its leash, as Article 1, Sec. 35-2 of the Duluth city code requires. If, for some reason, the leash has broken–most likely because your rabid beast has gnawed through it–feel free to fall back on voice commands, drawing upon the training any domesticated creature should have before being brought to a public place. If and when your dog ignores your voice commands, put into place an immediate consequence, such as grabbing him/her by the collar (once you finally come around the bend in the trail and spot your dog mauling me), telling him/her “NO,” and then dragging him/her promptly back to the car, all out-for-a-walk privileges revoked for the day. You might also consider apologizing to the hapless victim as she brushes muddy pawprints off her running togs.

This little behavioral plan comes easily to my mind, for, you see, I have two smallish kids, and so help me, neither of them will ever be in your personal space, much less licking your face, in an open public space like a nature center. I was able–get this–to train certain things into them. And there are not even leash laws in place for preschoolers. I’m just that civic-minded.

2) The first cold nights hit in September, and every year, these nights result in Shrew Carnage on the paths of Hartley. Indeed, little shrews–bewildered, perhaps, by a world where fashion icons are wearing leggings again, AND OFTEN UNDERNEATH DRESSES–tend to climb up onto trail and, well, die. Seeing a rodent in its death throes does not make for a pleasant run, especially when you’re like me and have a total fear of small, scampering creatures with pointy tails. Thus, if you’re ever at Hartley in the autumn, you might recognize me as the person who’s shrieking and hopping around out on the path, raking her fingernails over her cheeks, leaving bloody tracks behind on her face. Despite using my new “Dead Shrew Detector 2006” (purchased at a bargain price off E-bay) to bypass the shrew corpses, they still keep cropping up in my way. And some of them, natch, have been half-eaten by 70-pound black labs, who kindly finish their trailsnack and leave behind a mash of a few toothpickish bones and scattered internal organs. Can we have a group “EWWWWW” here now?

Such are my travails.

One reply on “Animals Under My Feet”

My dad has decided to have the “talk” with us when he visits next… maybe I’ll just have the computer up and running for him to look at!! I read that you started wearing nail polish, I hate painting my nails and I only do my toes, but I’ve had the same color for about six or so months now… a bright green, ah yes the beauties of simplifying everything that must be done! This way I can just paint over the old stuff! The question is, how many layers do you think are on there?? The world may never know!