A crisis can be an ongoing frustration, and with our investment in an 88-ounce bottle of honey, my frustration was not only ongoing but also sticky.

Why did we buy a bottle of honey so ungodly big? Short answer: we’re cheap. The longer answer is something eco-concious, wherein we’re trying to save on the energy and manufacturing going into buying multiple smaller bottles. At any rate, we ended up with a bottle of honey that, if filled with gasoline, could have topped off a lawn mower’s tank. No whimsical teddy bears for us! Nay, our household had a bottle so big that I could have cut the top off of it and used it as a gift bag, come Christmas…just dropping a v-neck sweater for Aunt Nancy right into the thing.

But I have to give the bottle its due: the thing held its honey and held it for a long, long time. I’m not sure our three-year-old son has ever experienced a different bottle of honey during his lifetime, in fact (and it’s big enough that he gets to do his time-outs inside of it, too! “You broke Mommy’s diamond tiara? Into the honey jar with you, son.”) The downside, of course, to our long-term investment in the bottle is that the honey aged, not like a fine Merlot, but like ice cream in the deep freeze. It became crystallized.

Towards the end, there, the bottle lived upside down in the cupboard (we’re just that clever!), but that made no difference. I could open the spout and try to start a flow into my steaming travel mug of chai, but three minutes later, not even a drop would have touched the tea.

The bottle was constipated in a way that no Metamucil would ever help.

So then we had to get aggressive with the thing, unscrewing the cap and fishing around inside with spoons, clothespins, and finally even paper clips. After a few days, even these helpful tools could no longer pry out even a tidge. There was honey in there, but it was recalcitrant. We could not beg it out, bribe it out, or yank it out.

At one point, my husband circled the bottle with a pair of scissors, stabbing and jabbing at its weak points, but even that effort was rebuffed by the Fortress of Crystal. We couldn’t break into the thing.

Thus, after a loooooong, hot soak in the sink, the honey bottle now lays in our recycling, bracing itself for its imminent reincarnation….perhaps as a child’s little red wagon. Now that would be a worthy corporeal being for such a stubborn spirit. 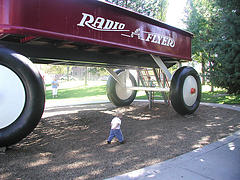