I guess it started the night I met my husband, a very dreamy evening. It wasn’t meant to be dreamy, for we were set up, meeting each other “blindly,” as the rhetoric goes. But we were matched by my cousin, who had asked each of us if he could serve as our “agent in the field.” Feeling agreeable, we met over a 5-hour dinner in a log cabin (my cousin’s house), with the aforementioned cousin, his wife, and their two daughters present. We definitely weren’t dealing with the nerves that accompany meeting a stranger in an intimate, romantic place. Tripping over Sleeping Beauty slippers while asking, “And you went to college where?” kept things light-hearted.

However, in one quick moment, things took on weight. Because Blind Date (aka My-Groom-of-Seven-Years) is of Norwegian descent, he does enigmatic pretty well, so it definitely struck me dumb–a rarity–when he announced, after a discussion of his love of cooking, “I’ve decided I’d like to get married so that I can get a KitchenAid mixer.”

Frankly, I had to pause for a beat or two, just to be sure that he wasn’t actually proposing something there. But then I realized he was making a general comment–wanting to highlight that the best way he saw to afford such a big-ticket purchase was through a wedding registry. Hey, wait a minute, he might be funny, methought!

Fast forward some months, and you’ll see us, fresh after our wedding reception, opening gifts at a brunch the next day. Jehosephat, but there it was: the KitchenAid mixer. A large group of friends had each pitched in some bucks, coming up with enough for not only the mixer but for a few attachments, as well. My Groom’s machinations had paid off; sure, he had to take me as part of the bargain, but he got his mixer, and leavened and unleavened breads alike would be his! Ha-ha-ha!!!

Keep your fast forward going, now, to Wednesday of this past week, when Groom-Cum-Stay-At-Home-Dad was feeling very tra-la-la at the prospect of a morning in the house alone (we’d sent both kids to a kibbutz or something, to learn the value of hard work). First, he would corral some of the dust bunnies, scour out the small family of five living in our toilet bowl, and do the bi-yearly changing of the sheets. After that, he’d read some gossip on the Web and prepare for a lurvely Fall run. Oh, and somewhere in the middle there, he’d make a couple loaves of foccacia, his donation to a friend’s birthday party later that evening.

Because he’s well aware that we’re living in the “oughts” now (those antiquated 1990’s are over…it’s a new millenium), he was multitasking, but instead of listening to his I-Pod while IM-ing his ten best friends and updating his MySpace “friends” list, he was hoovering, scrubbing, and letting his beloved KitchenAid knead. When an enormous crash echoed from the main floor, Groom knew it was too much to hope that our crusty, old, dark kitchen had just hatched itself off the back of the house and finally slid into Lake Superior.

Rather, the KitchenAid had developed feet during the kneading and walked itself right off the counter. I posit that its actions were snit-based, and it had seen its chance to take out all of its main competitors on its way to the floor. You see, a year-and-a-half ago, we invested in Miss Silvia–a sleek bombshell straight from Italy who happens to be an espresso maker (my love for her made me realize I am open to a marriage of three). Her paid companion is the burr coffee grinder, who lives next to the glass cookie jar (home of more love), who is neighbors with the snooty and smug French Press (that minx!), who, suprisingly, tolerates the O.G. of the countertop: the bashbox for the coffee grounds.

Actually, I should have used past tense verbs in my listing of some of those countertop residents, as Walking KitchenAid and her travelling cord cut them down in their prime. RIP, French Press. 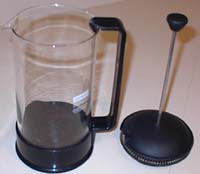 Indeed, the KitchenAid cut an impressive swathe that day, using her long tail to tip over Miss Silvia, who then emptied her reservoir of water onto the floor, where it formed the base of a coffee grounds/broken glass/cookie jar/foccacia dough slurry.

True to her workmanship, though, KitchenAid held on, her cord remaining married to the socket, even as she dangled there over the slurry, realizing she’d gone too far in her spite. When Groom spied K.A. hanging there, looking a little overwhelmed by her work, he rushed to her side, pulling her from danger, taking her vitals.

Woefully, K.A. was out of commission; even Groom could not turn her on. At this moment, even in the retelling, I fear for my marriage–if the basis of our marriage is broken, well, then, what do we really have together?

After taking an hour to clean up K.A.’s temper tantrum, intrepid Groom gently pried K.A. apart, fiddled with some sprockety-knobby things, and had her back to humming in no time. She, and I, would not need replacing.

For me, I can’t help but think that KitchenAid was sending us a health-conscious message that day, protesting the best she could, telegraphing her message of love: “Get rid of the caffeine. You don’t need carbs. Spend your years watching me twirl, and get rid of these other bimbos.”

Perhaps the most inspirational part of this mini-crisis is the fortitude of the coffee-grounds-encrusted Foccacia That Almost Was. Even after it was tossed in the trash, it continued its yeasty imperative and grew, grew, grew into the evening. We’d stop by the garbage can occasionally, opening it up and hollering encouragement down the hole: “Way to go, FTAW! You’re getting really plump down in there, Junior!!”

Thanks so much for that much needed monday laugh!

Us Norwegians are pretty amazing people, ya know. Can’t beat that with a stick. Or something. Yeah, I have no idea why I said that…

For years I have hoped and Emily has prayed that you would join the aughts and get a blog. And more relevant we have a beloved KA as well. S/he’s yellow. I can clean it easily. I have never used it, thoguh. I guess we do things more traditionally in the cities. I’ll use the KA as soon as Emily mows the lawn.

Now I’m off to figure out to get a picture to put next to my name when I leave a comment like these others folks do.

OMG! jocelyn, you have made my dreams come true. i can only read and re-read your masterful christmas letters so many times. now i can finally enjoy your wordsmithing on the internets. hurray! love, em