Skip to content
“Scoundrel Cabbies: So Unfare”This past weekend, I had to don a big mohair sweater of The Happies, as I spent four days in the mountains of Colorado, celebrating past, present, and future with two of my best galpals from college. To even divulge how long it’s been since I first met these women requires that I sit down and put my head between my knees for at least four breaths before I can gasp out, “Twenty-one years.” I am examining my crow’s feet in a magnifying mirror as I type those words, remembering how unlined and dewy we all were when we first encountered each other on 4th Goodhue (our dorm freshman year) at a floor meeting, where one of these friends stopped the show by announcing, “And I have this new thing called a CD player in my room, so if any of you want to stop by to listen to a little Peter Gabriel, that’d be so rad.”

In the ensuing four years, we drank a wheelbarrow full of Long Island Iced Teas, danced to The Gear Daddies and The Wallets and Modern English until sunrise, and occasionally even stayed up all night writing papers about “Meritocracy and Hegemony as Evidenced by Thomas Pynchon.” Them’s ageing activities, folks, and we might have engaged in them more sparingly, had we known that the real wrinkle-causers (committing to love, having children, and weathering dithering Demoncrats and a bellicose Republican administration) were still to come.

At any rate, this past weekend was our second official galpal weekend, wherein just the three of us gather together, away from kids and partners, to gab, eat, drink, reflect, and review. I have to say, my life ends up feeling completely inventoried by the time we’re done, and I have a renewed appreciation for all the mundane things in my daily life that seem blase without the benefit of such an external processing. By the time we’re done with our weekends together, I’m again awed that my husband has a chai tea waiting for me by the back door every morning as I dash out to work; that the shoes I bought last week are versatile and cute, simultaneously; that I live in just the right house for me; that I live with someone who reads and likes to talk about it. I get all oogie about my life, thanks to these benchmark weekends.

Even further, when The Ladies and I headed out for the weekend’s big splurge dinner at a place called Samplings, I had cause to appreciate how the idea of “crisis” is a state of mind and mood more than an incontrovertible reality.

Here’s what happened: we had a reservation for Samplings on Friday night, but then those wacky Colorado skies decided to dump snow for almost three days straight (someone should capitalize on that and build up some sort of skiing culture around the place, really; then developers could come along and clear cut all the beautiful trees on the mountains, making room for fifty thousand high-priced condos–you know, paving paradise and putting up a parking lot and all. Just an idea for any entreprenuers who spend their weekdays perusing this blog), so Friday night featured snowplows on the road and cars getting chains put on. This was not the right night to head out for a few bottles of wine and general gustatory celebration; rather, we decided to stay in and drink margueritas and eat a homemade chile with a mole sauce (“What, so the recipe tells us to add chocolate to our pork? It’s so rare one has permission to act out one’s most private dreams in a public arena!”) .

Happily ensconced in the–you guessed it–condo, we moved the reservation at Samplings to the next night, when it was still snowing, but much more lightly. But the issue of driving coupled with bottles of wine still reared itself. It was time to tap into cab culture. After about eight phone calls, my pal Hoo learned that there are two companies that run in the area, each with roughly ONE taxi. The rates they quoted varied dramatically, so we decided to go with Cheap Guy Cab Company instead of Twice the Fare Cab Company.

But when we tried to nail the Cheap Guys down about a pick-up time, they slithered through an actual committment, giving us the “Call us back in 45 minutes, and we’ll let you know.” Eventually, we decided taking the free shuttle into Frisco would be the best idea, even if it did take an hour to traverse the ten miles from condo to restaurant. After dinner, now that’s when we’d need a taxi, when it was late, and when we didn’t feel like transferring from free shuttle to free shuttle back up the mountain.

The restaurant was terrific–just the right combination of relaxed and chi-chi. True to its name, the place offers either a tasting menu or the option of ordering multiple “small plate” dishes to share at the table. We went with nine small-plate choices–(get this, you foodies out there: roasted garlic and leek soup with fois gras butter; butternut and apple soup with pepitas; organice baby lettuce salad [with a Roaring ’40s blue cheese]; roasted shiitake mushrooms with truffle oil; bruschetta with an eggplant spread on olive bread; duck confit ravioli with butternut squash and brown butter vinaigrette; top sirloin with roasted garlic and pearl onions in a red wine reduction; duck confit on a bed of wild rice risotto; and venison on a fig-laced quinoa over top of a roasted orange slice…all of which was followed by the Chef’s choice dessert platter, including an espresso panna cotta that had me leaping into the mug to bathe in the velvety grounds…now this was my kind of all-body exfoliant)–and let the sommelier hook us up with a terrific chardonnay and pinot grigio. There was talk, a toasty fire, and the usual Colorado “dude” vibe, provided by our snowboarding waiter who “got in 80 days last year on the hill.”

Thus, when we finally staggered out of Samplings and into the snowstorm, the world was softly lit with pleasure and very tiny belches. We’d called a half an hour earlier and talked to Cheap Guy, who promised to pick us up at 9 p.m. When he didn’t arrive, we just kept talking, ate snowflakes, and eventually started shivering. The toasty glow was threatening to wear off.

And half an hour after that, a feeling of crisis threatened to show up when Cheap Guy still didn’t. Further attempts to reach him and discover his whereabouts resulted only in a rude busy signal. Feeling strung along, wondering how we’d ever back to our Aveda haircare products and leftover mole chile, we allowed a smidgen of “So what the hootenany are we gonna do?” to enter our minds and conversation. Eventually, we decided to show him who was boss and call the rival company, Twice the Fare Price Gougers.

TtFPG listened to our tale of stranditude with great interest and then assured us that, although they were currently on a call, and it might take them some time to get to us, they definitely would eventually show up, unlike the “scoundrels” over at Cheap Guy who would promise us the world, only to leave us standing decked out in winter white at the Samplings altar.

As the Cold War between cab companies gained heat, we glanced down the street and saw, emerging from the flakes, swaying and creaking towards us, the free shuttle. Hollering a quick “thanks for the update on mountaintop transportation relations” into the phone, we hoofed it to the bus stop and gratefully hopped aboard the shuttle, realizing that it only takes one solid option (and two bottles of wine) to neutralize a potential crisis… 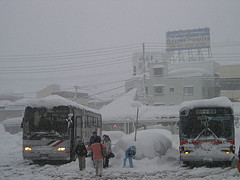 …especially when that option, as it lurches up a mountainside for an hour and a half, covering its trusty ten miles in that time, blares from its speakers tunes-for-39-year-old-women-on-reunion. We had a group singalong to Four Non-Blondes (“And I say hey/yay/yay…What’s goin’ on?”) while the weary bus driver announced each imminent stop: “Library.” “Elementary school.” “Wal-Mart.”

It occurred to us to protest the need for stopping at the elementary school at 11 p.m. on a Saturday night (you’d have to get busted for doing more than simply giving little Skeeter Bejeesus a wedgie before you’d be kept that long in detention, right? Being kept after school for an extra day and a half would demand, at the very least, some serious cheating and fouling in the tetherball tournament. And then you probably wouldn’t need to catch the bus home, as your mom would be waiting outside in the two-tone station wagon, spewing out at the sight of you and your Nikes dragging towards the wagon: “So you think cheating is fun? Let me tell you what’s fun: laboring for 24 hours in sweat and agony, only to have the fruit of those labors, ten years later, turn into a big cheaterpants who’s kept after school for a day and a half. Yea, that’s really, really fun. Now get in the car. We’re going to Grandma’s for tuna casserole. And you better not have forgotten your homework.”).

Yet we didn’t need to protest unnecessary stops. Instead, we remembered:

We were safe.
We were moving.
The snow was lovely.
And we were together.