I pull up to the high school — running late! — and park at the curb. It’s my first time driving since shoulder surgery, my first time behind the wheel in six weeks. I’m shaky.

As I put the car into Park, Allegra bursts through the doors of the school’s glass foyer and hustles to the car. Her face is impassive. Reaching across my body with my left hand, I engage the emergency brake. The car idling, I hop out and let the sixteen-year-old slide into the driver’s seat.

She buckles in, gives me a sideways glance to see if I need any help, and there, then, my question explodes: “Have you heard?”

“Heard what? What do you mean?”

My face is red. I am sobbing. Again. I’ve been sobbing for an hour. I thought I could keep it together in public, but I can’t.

In front of the high school, my confused kid at the wheel, I melt down. Grabbing at my glasses, I set them on my lap while I wipe my eyes, cry some more, wipe again.

“Prince died. They just announced it an hour ago.” Saying the words sets me off once more. “He was only 57, and they don’t know what caused it, but they found him in Paisley Park, and…”

Equal parts startled and shrugging “just another Thursday with Mom,” Allegra attempts to adjust to the news and my upset. Five minutes before, she’d been stashing books in her locker; she hadn’t realized that sometimes in life, you walk out a door and into someone else’s pain.

I laugh a little while I’m crying, tell her I realize it’s weird for me to be so distraught, assure her that we can get going so she doesn’t miss her appointment.

For a quick beat, she is silent. Then she says it again. “I don’t know what else I can say, but I’m really sorry, Mom.”

I thank her, run my sleeve across my eyes, and the adult in the car adjusts her mirrors and pulls away from the curb. Six minutes later, the car is in a parking garage across from the orthodontist’s office. “Hey, kiddo? I’m just going to stay here in the car, okay? You know how to make your next appointment, and be sure you validate the ticket. I just can’t see people right now. Plus, I want to hear what they’re saying on The Current.”

For twenty minutes, I sit in the car, listening to the music that defined decades of my life, listening to grieving associates put words to the shocking loss of their idol, mentor, boss. As I frantically text with a slew of friends, my phone rings. I don’t recognize the number, but I answer it. It’s a particularly special college pal. Outside of a few emails exchanged each year, we’ve largely fallen out of touch.

She had to call. It’s a short conversation, full of love and memory.

And then she’s off to a couple afternoon meetings, mopping at her eyes, and I’m sitting in a concrete parking garage, my brain a jumble of thoughts.

I remember the summer of 1984, when I was seventeen. At long last, Purple Rain had come to Billings, Montana. Giddily, four of us tittered in the dark theater — Prince! So hot! Seexxxxxxy! At one point during the movie during a particularly lusty solo during which Prince ground his axe into his crotch, I leaned over to my friends and stage whispered, with what passed for humor in that time and in that place, “I’d give anything to be that man’s guitar!”

I remember the dress my mom made me for a formal dance and how it HAD to be purple. With fancy sleeves and flourishes. 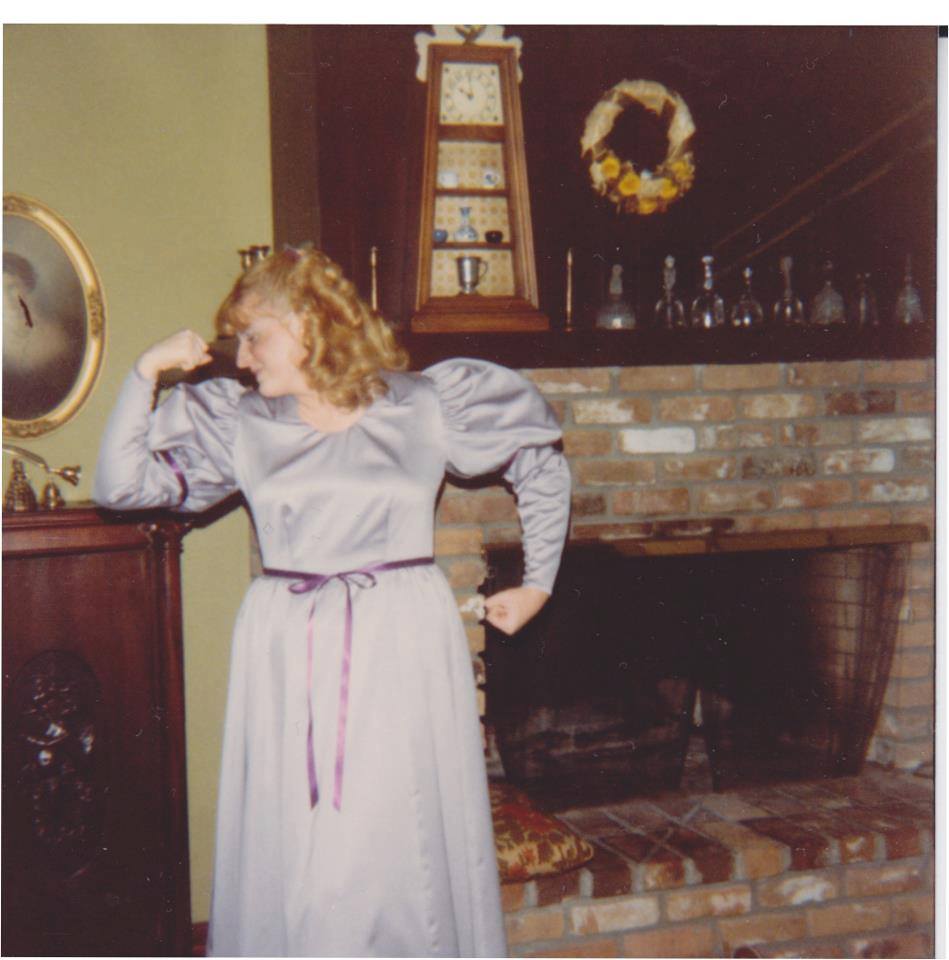 I remember going to see The Jayhawks at the Fine Line in Minneapolis, and midway through the show, the energy in the room changed. Looking over my shoulder, digging my elbow into my pal Colleen’s rib cage, I gaped. There he was, at a table in the back of the room. Of course. He was always doing that — checking out the local scene, seeing what was happening in his city, scoping talent.

I remember dancing at GLAM SLAM, twirling under the lights, laughing with my friends as the room flickered red – purple – yellow. Then. A buzz. He was there. In the balcony. Watching the floor. Excited, joking yet almost self conscious, we hollered at each other over the driving beat: “WHAT IF HE WANTS US TO BE BACK-UP DANCERS?”

I remember a great regret: an evening of drinking at a Minneapolis bar, getting chatted up by a couple of fellas, and having one of them announce, “My dad is rich. He’s friends with Prince. I know Prince.” When we lost our minds and peppered him with questions, he finally said, “I can call my dad. We can go to Paisley Park tonight, if you want. I’ll have him send a car.” Dubious, guarded, wanting to give over to what felt like exaggerated claims, we watched him make a call. We hemmed. Hawed. Finally said, “Hey, how about a rain check?” Forever, I will bemoan my reluctance to get into a car with strangers.

I remember my husband saying that because he grew up a couple miles from Paisley Park, his family would hear music floating through their windows some nights, the notes soaring from parties and performances, the resonant glamour filtering into their workaday hours.

And that’s why I’m sitting in a parking garage, crying. The sponsor of many of my best times; the inspiration for thousands of my finest gyrations; the badass who refused to let his roots limit his reach; the source of my belief that magic wears boots; the genius who demonstrated it’s possible to be masculine and feminine, black and white, big and small, demanding and accepting, flirtatious and somber, shy and bold, controlled and generous; the artist who redefined self-definition and showed a Montana girl weighted with expectations, shoulds, and people-pleasing habits that it’s beautiful to live however the fuck you want — was gone.

Sitting in the car, digging through the glove box for a napkin, I also remembered something else, something more remote.

I was ten in 1977, and I just didn’t get it. Whenever I turned on the tv or looked at the newspaper — heck, whenever I walked into the produce section of the grocery store — there were all these people, crying and leaning on each other, blowing their noses. Some of them were in a state of hysteria; some of them were even making pilgrimages to a place called Graceland.

What the? So Elvis had died. I knew Elvis. He sang rock ‘n roll. He was famous for helping start it. Or something.

Whoa. Those old people were losing their minds. I mean, calm down already. He was just a singer, and they hadn’t even known him for real.

But now I get it: they had known him for real. Elvis did for my parents’ generation what Prince did for mine. That business of blowing the shutters off a battened-down house and making the unthinkable possible? Elvis did it, too, with his pompadour and swiveling hips. Three years after Elvis’ death, in 1980, a similar sort of collective outpouring happened when John Lennon was shot.

In each case, all those people leaning on each other, crying in public, telling stories about the man who’d changed their concept of the world, of possibility, of acceptable — all of them were comforting each other in the face of a very particular kind of grief: the sadness that rolls intimately through the individual heart yet is shared by millions.

We who loved Prince have been doing that this week. We’ve been sharing our grief together, publicly, in the process assuring ourselves we weren’t alone; we were part of a thrumming mass of love and adoration. So we share our stories about a man of greatness who, to the end, stayed connected to his community of origin. We come together to pay tribute to a complicated genius who was always, unquestionably, A Good Neighbor.

Later in the day on April 21st, after the orthodontist’s appointment, after school, after I’ve stopped crying and startling my teenager, I am given the greatest of gifts: a new Prince memory to treasure.

“Hey, Mom.” I hear my girl’s voice calling from her bedroom.

“What is it, Leggy?” I try again, stuffing the hanger into the closet.

No answer. She always says everything best without using words.

So I do the thing called shutting up and listening.

And there it is. Spinning ’round on her turntable. He’s singing. He’s suggesting, “Let’s go crazy.” The track is full of all the vim and color and joy I ever hoped would pour into my kid’s ears.

Last fall, this same teenager had admitted, as we drove to a Taylor Swift concert, that she’d never really sat down and listened to the guy called Prince. On the spot, her cousin offered up her iPod. Driving towards Minneapolis, we listened to Purple Rain together, the car throbbing with guitar and falsetto.

When it was over, Allegra agreed. Yeah, that was good.

Some days later, I mentioned to my best friend, the same friend I elbowed in the ribs at the Fine Line when Prince slid into the room, that Leggy was getting into vinyl. That she’d recently heard Purple Rain. That she’d liked it. That it was fairly spendy to find a copy, even online.

True to form, this friend, this Colleen, said, “It would be one of the pleasures of my life if I could send that album to your girl.”

So, on that night when my heart is a fragile, vulnerable thing, the sixteen-year-old takes the album she received from her mother’s friend of thirty years, and she sets the needle into the groove.

And all the dots of my life connect in the most elegant circle, a closed loop with pulses of purple sparking in the middle.