Being Able to Climb a Princess’ Hair Is Pretty Ludicrous, Too

Once upon a time, two white, middle-class Midwesterners decided to invite all the townspeople to a feast called Potluck.

Listen, not all fairy tales begin with mentally-unstable witches making mischief. Sometimes they begin with swans hatched into the wrong family; hungry wolves; vain emperors; magic shoes; and, yes, middle-class white people who like to eat.

In fact, I’d argue mentally-unstable witches making mischief are all too real, particularly in tales of the modern-day workplace. I’ll take a ravenous wolf at the door any day. At least we soft little piglets stand a fighting chance against that type of beast.

Those summoned to Potluck were also issued a challenge: they were to present a dish that connected to a children’s story, nursery rhyme, or book. This was a very literate kingdom, unlike the neighboring duchy of HatesBooksLandia (a place of strapped economy, depressed citizens, and limited, ummm, how you say, word thingies).

On the evening of Potluck–an uncommonly fair day!–the townspeople gathered and entered their dishes into competition. The competitor known as Keg of Beer (based on the tale of John Barleycorn) served as a natural meeting point for discussions of weather, health, shoes, work, home repair, children, and appalling dresses at celebrity weddings. Excitement reigned, for the victors at Potluck, both young and old, would be handsomely rewarded. Two youths would win gift cards to the general mercantile known as Target. Two elders would tote home baskets of goods that would make bed-bound grandmothers far and wide wish for a visit.

Potluck proved to all neighboring duchies that where there are books, there is creativity.

And the occasional scary cousin toting a tray of poison apples. 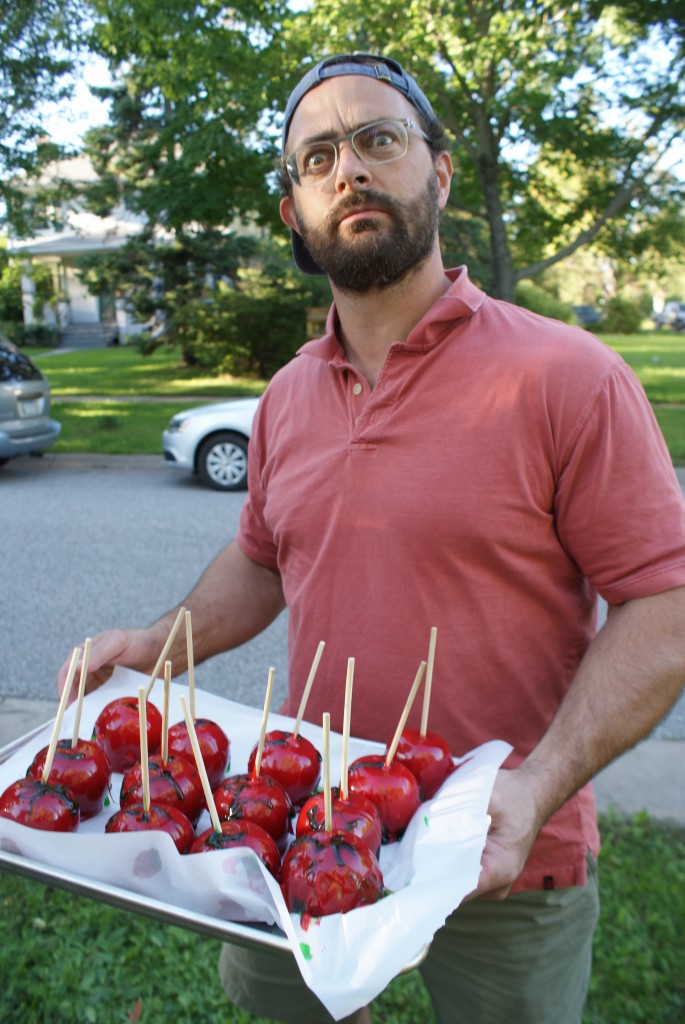 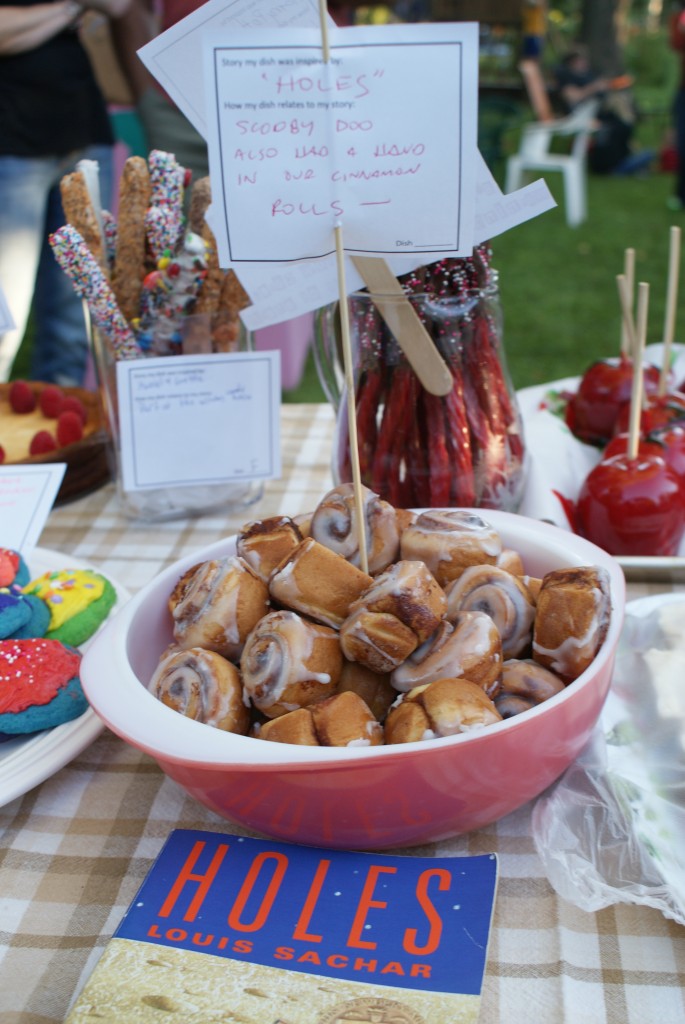 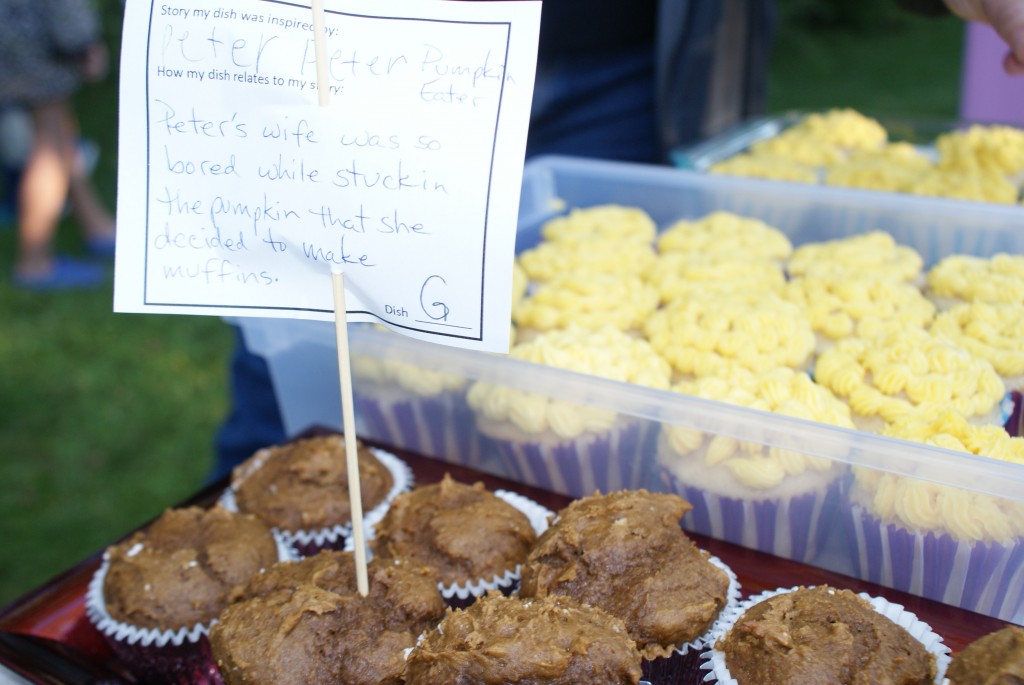 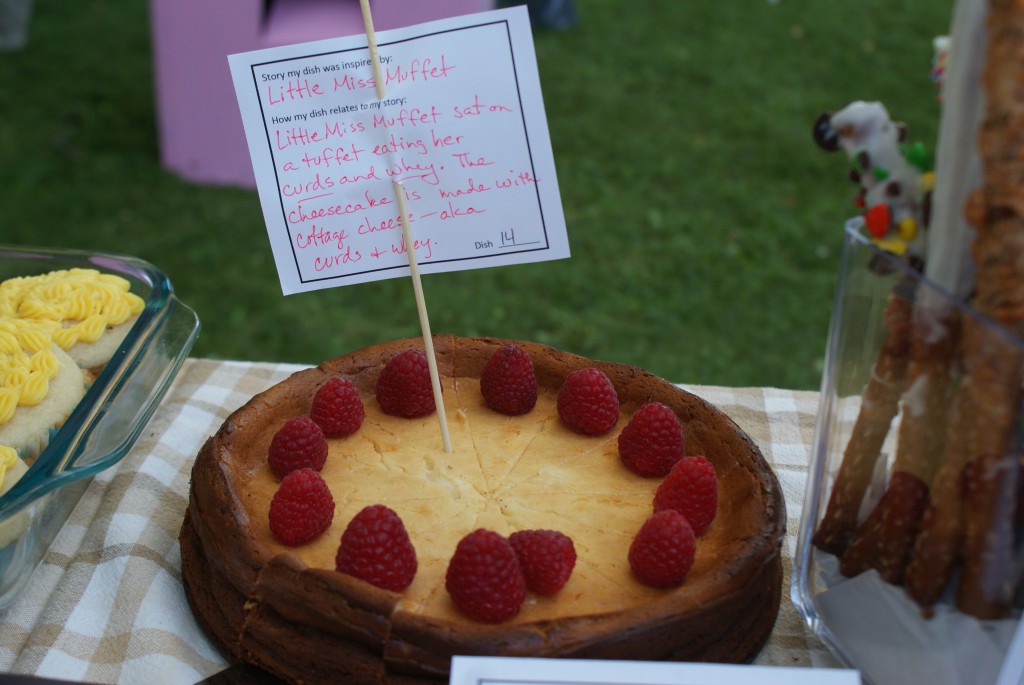 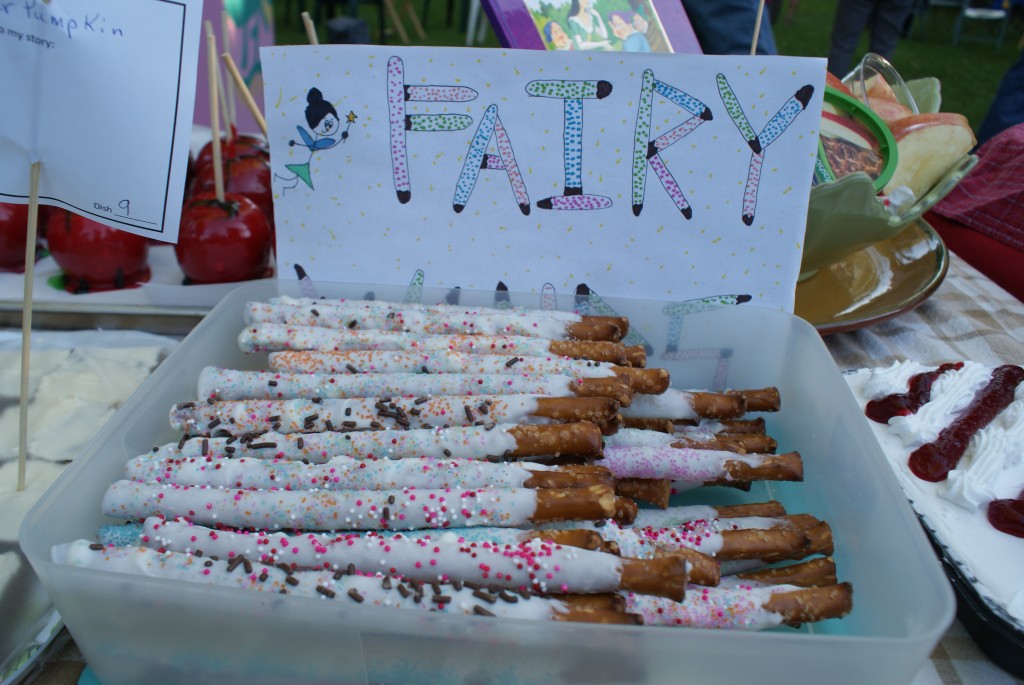 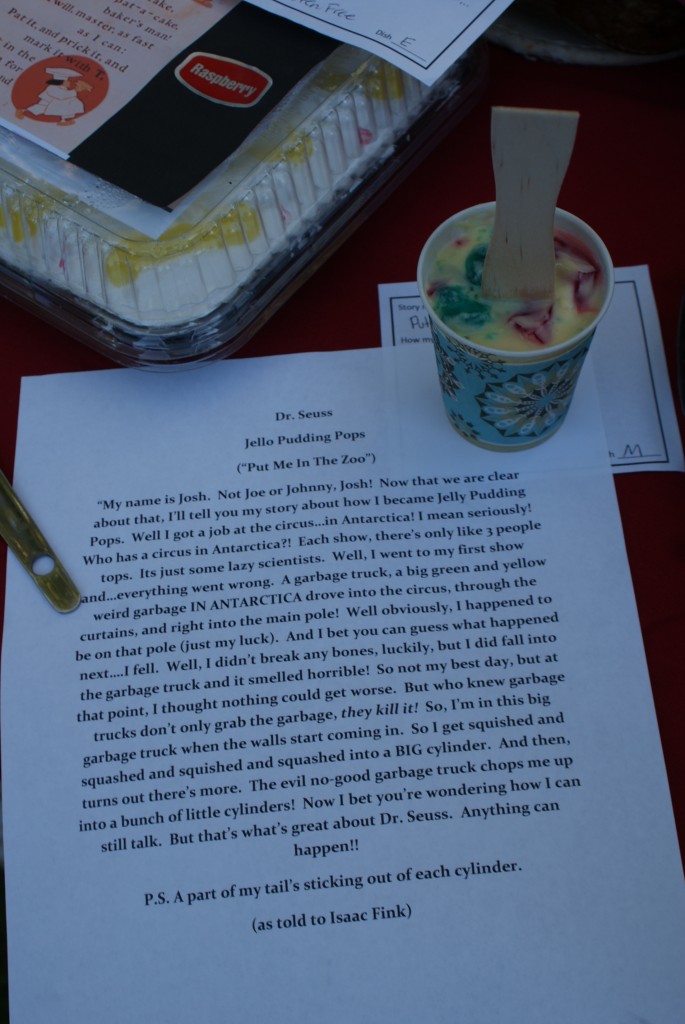 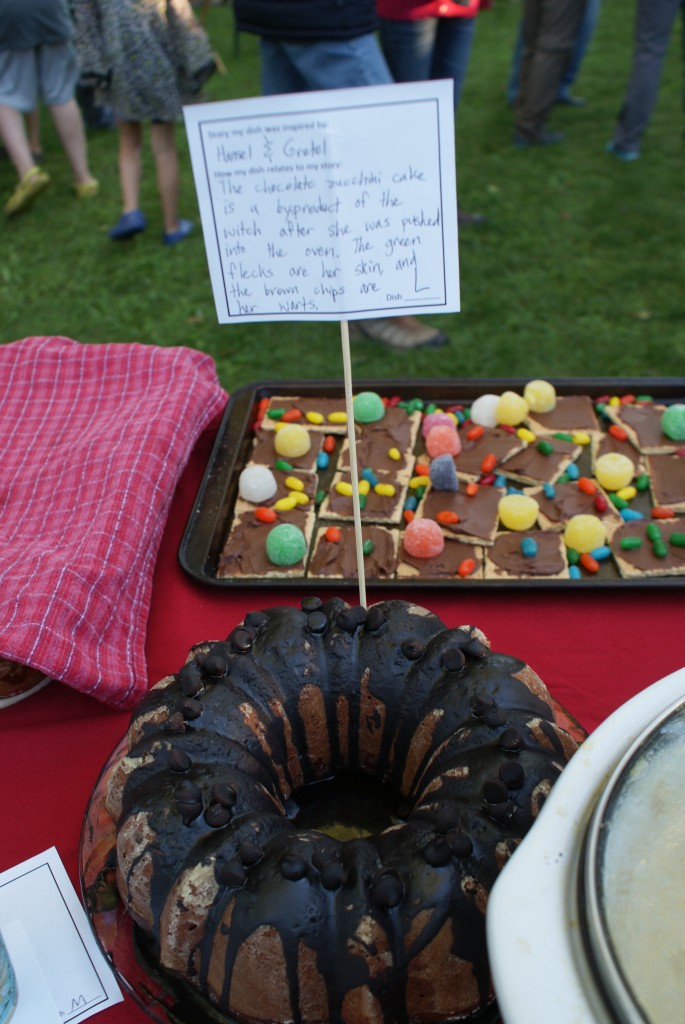 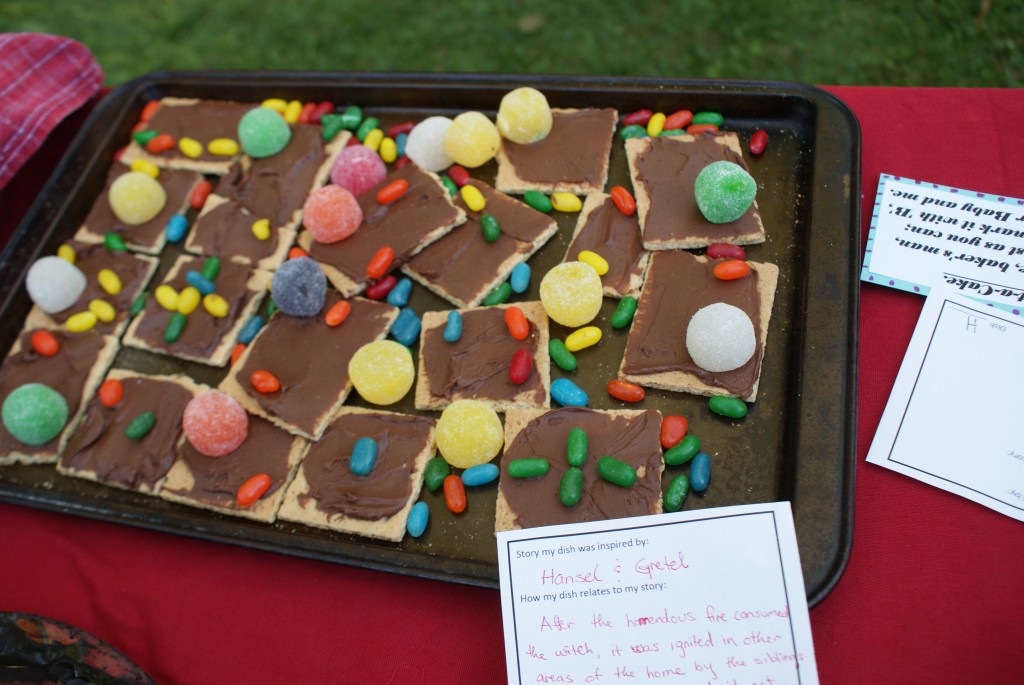 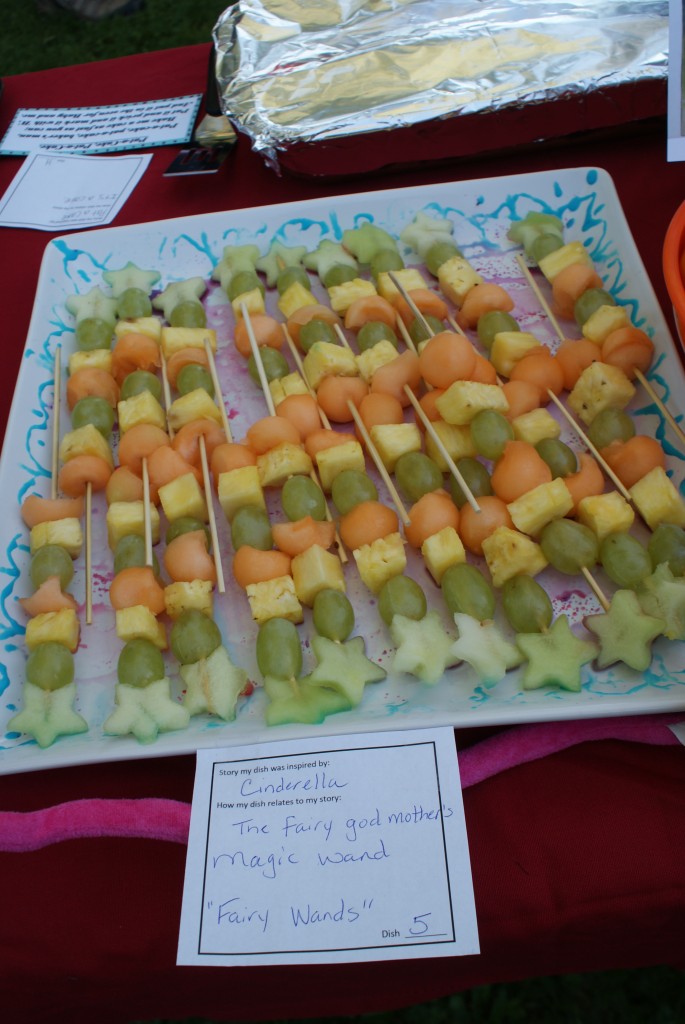 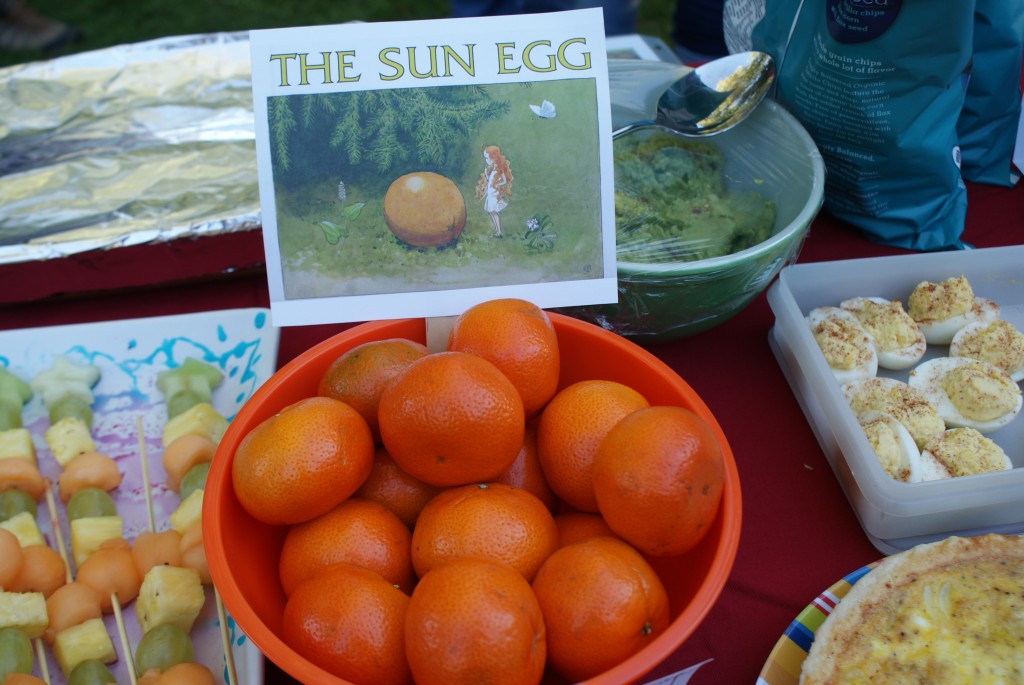 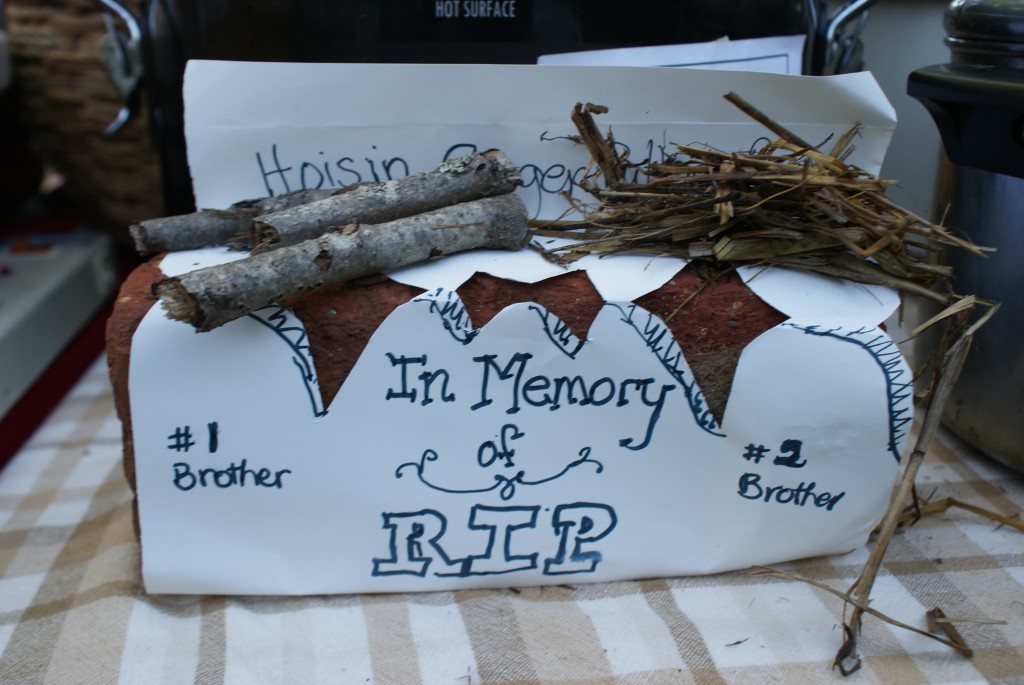 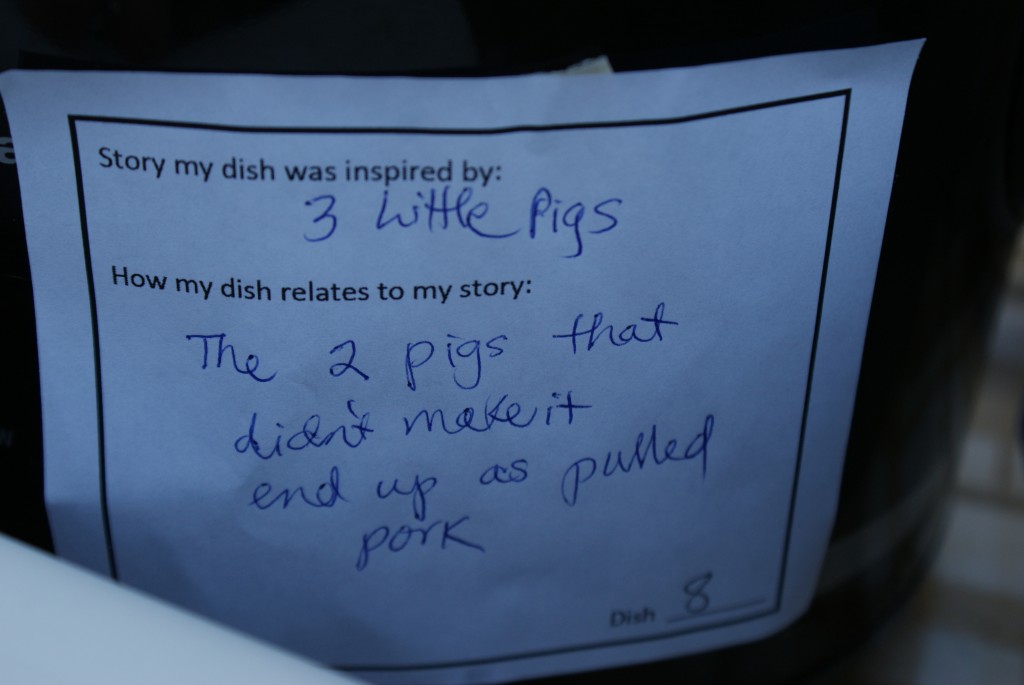 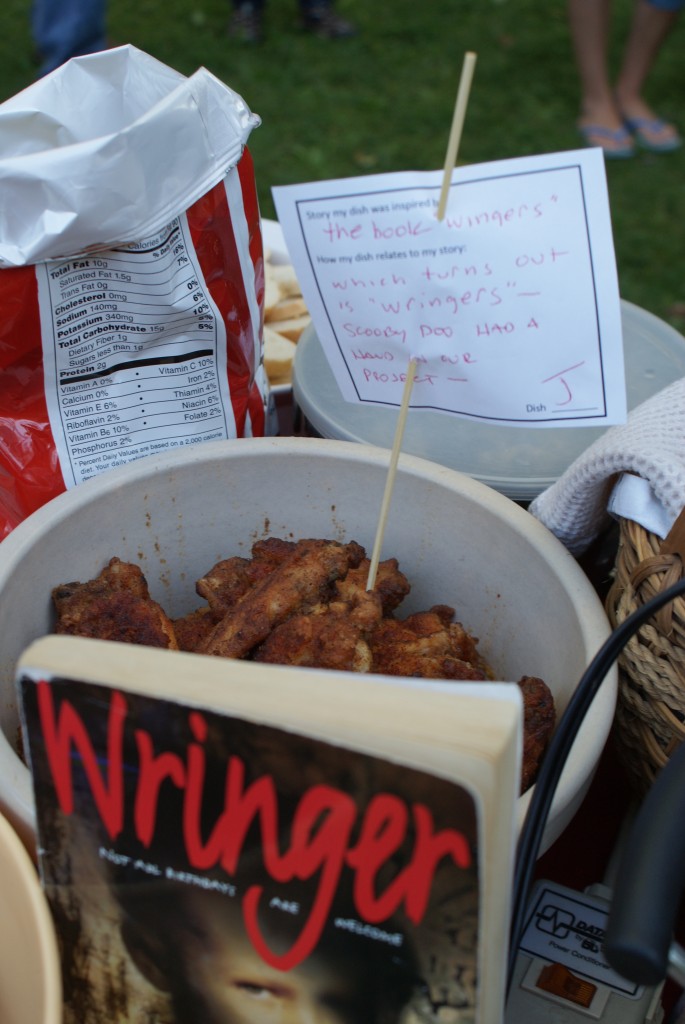 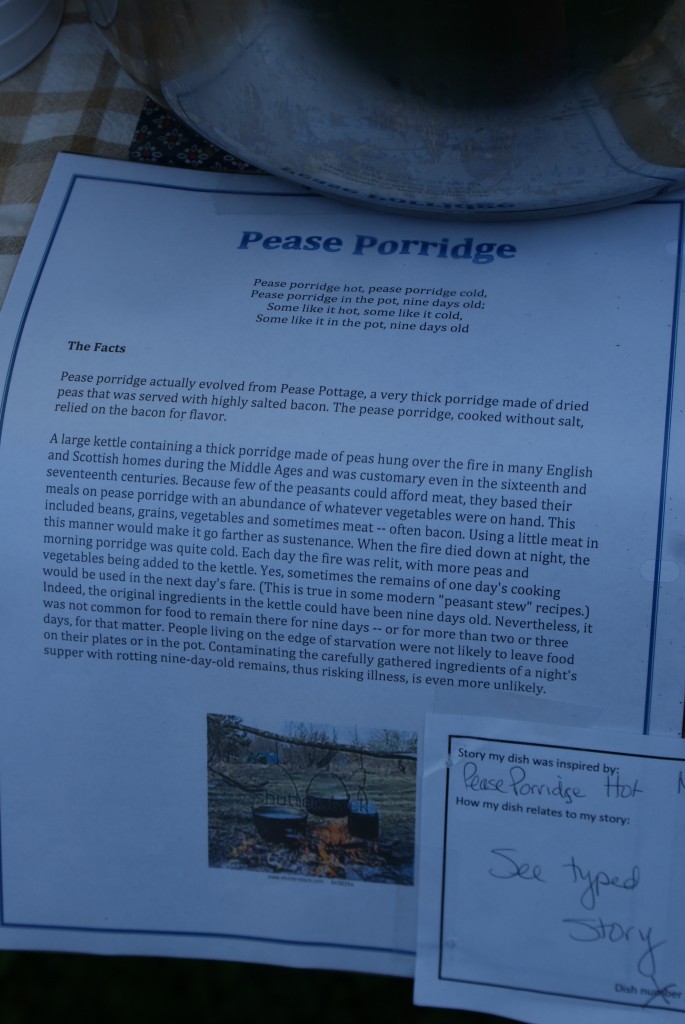 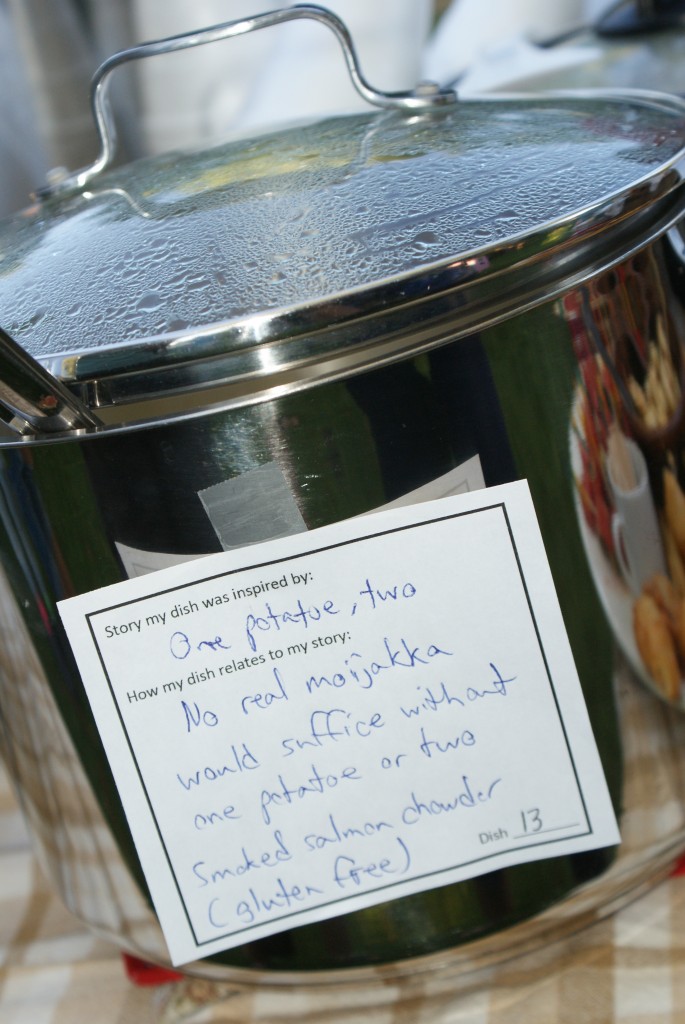 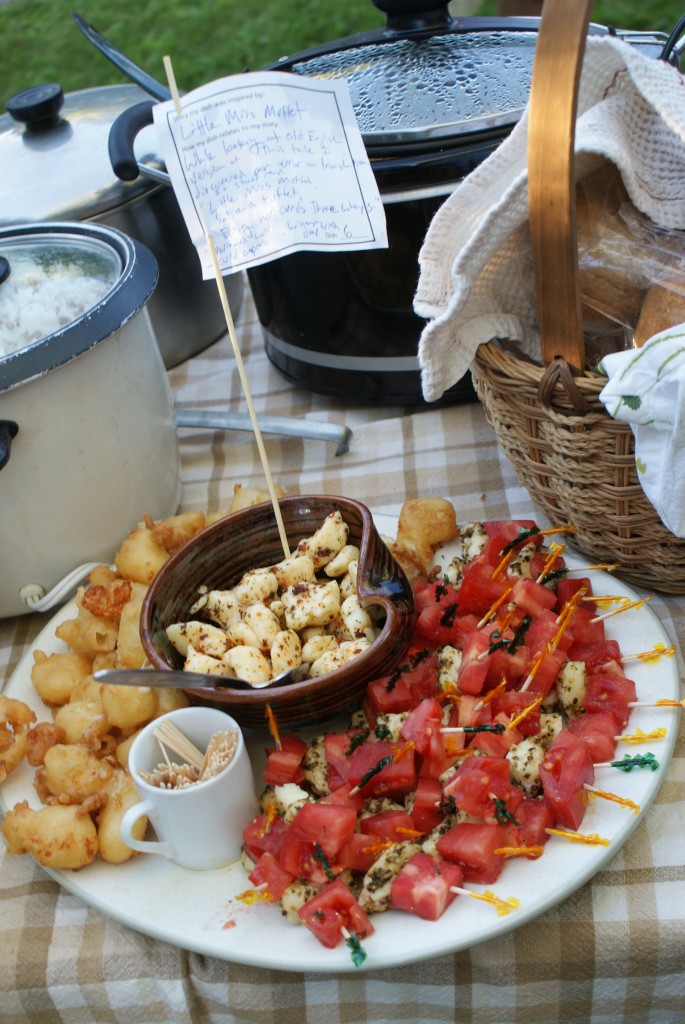 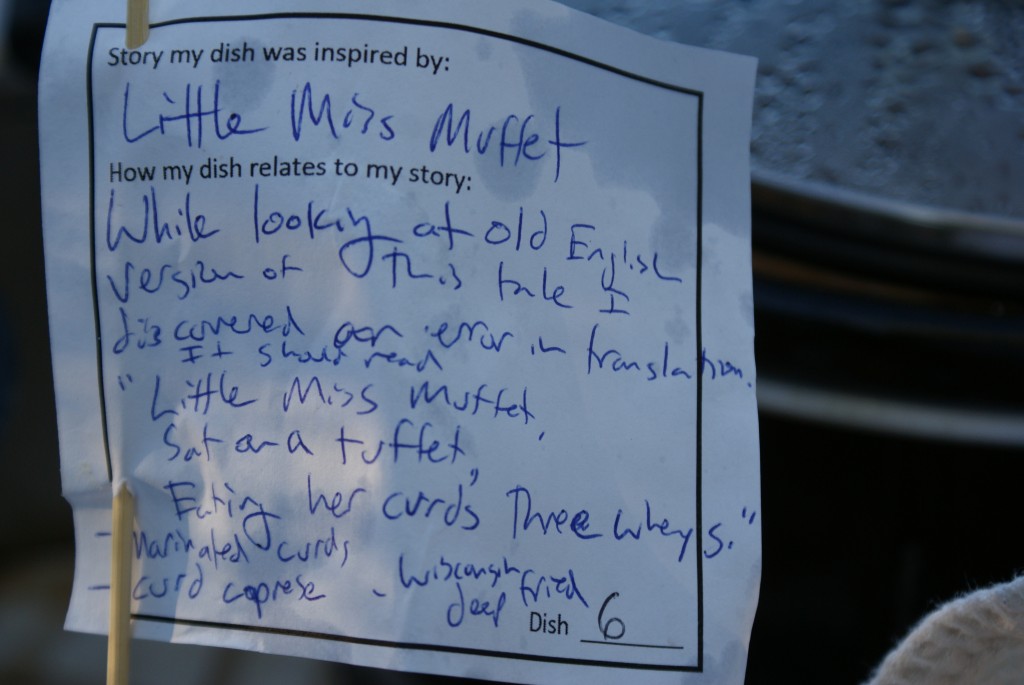 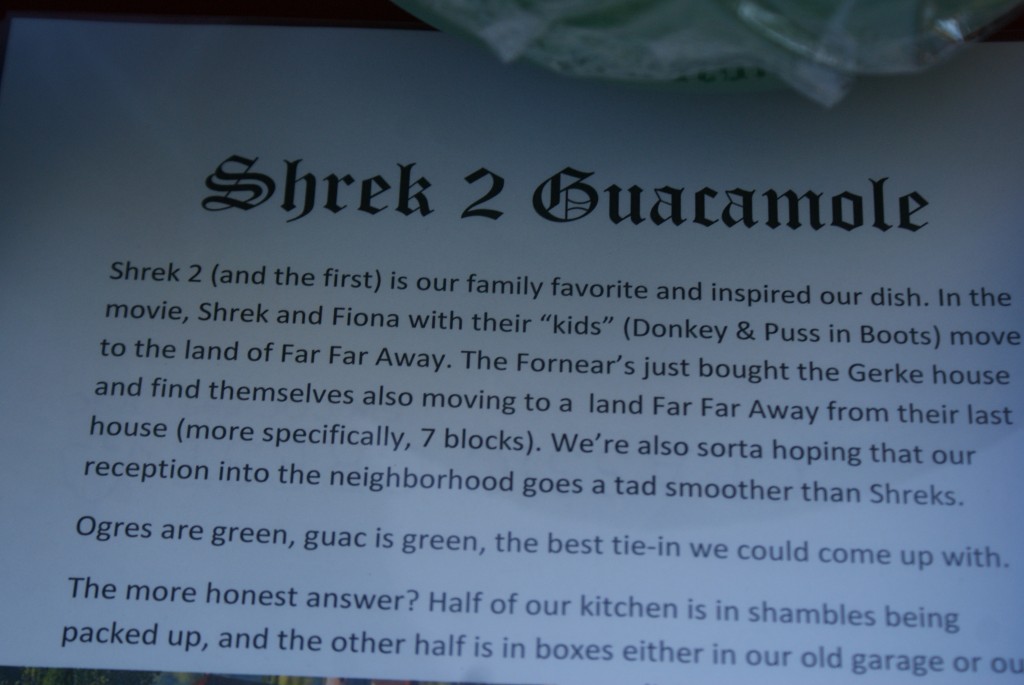 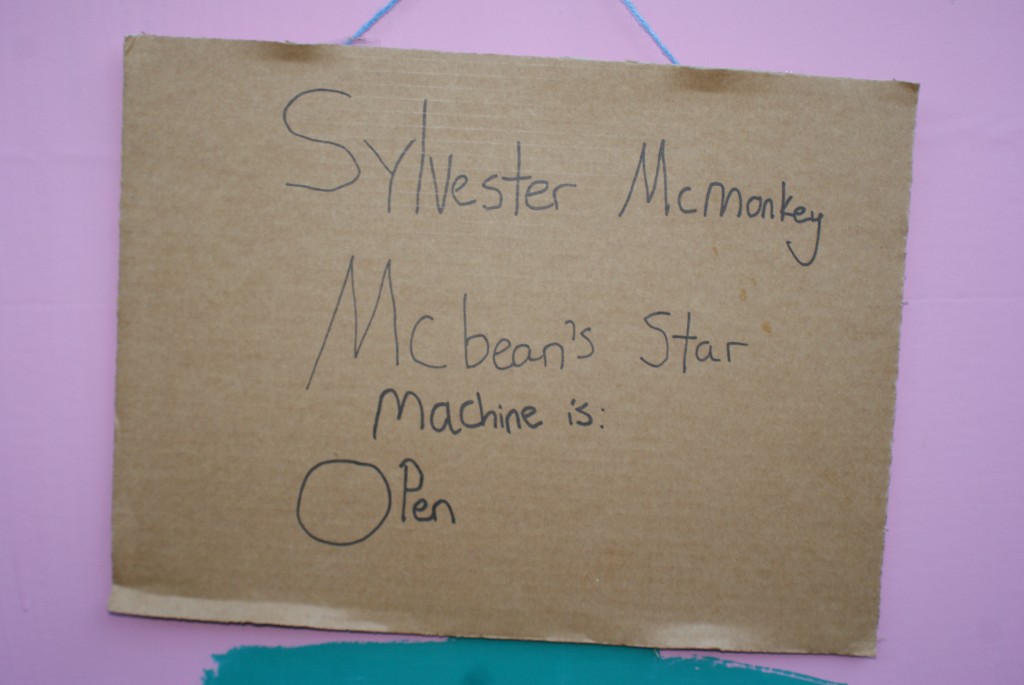 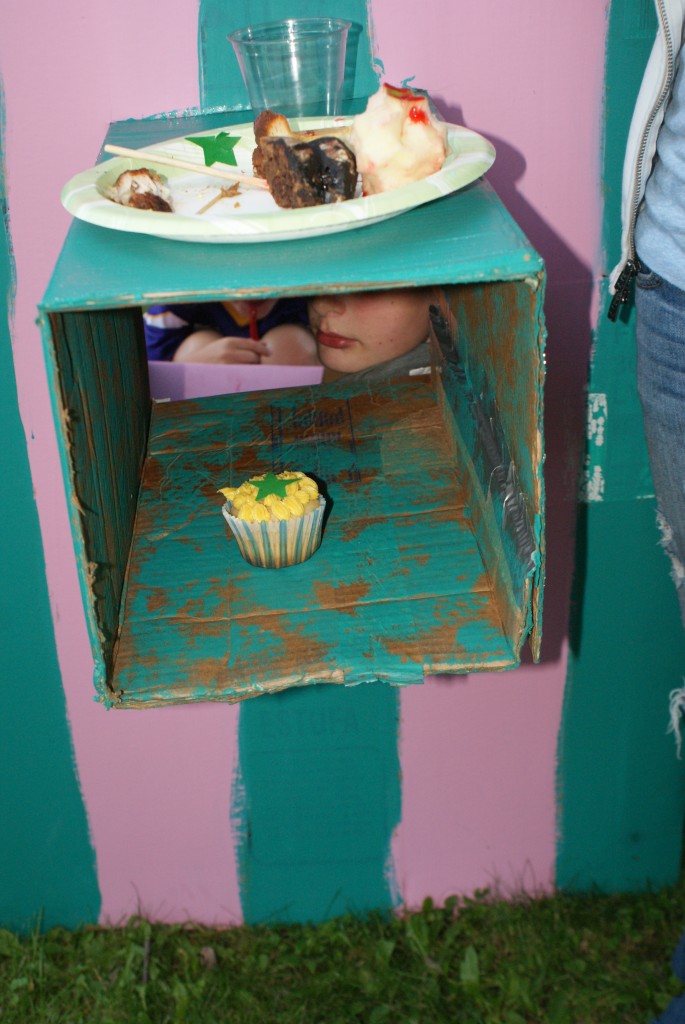 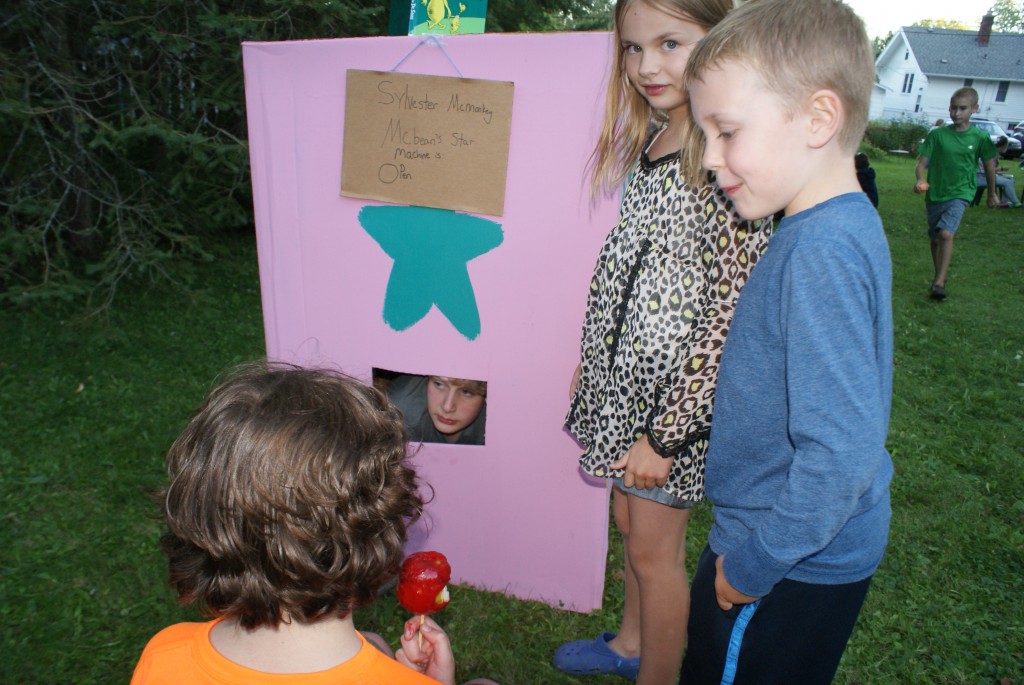 After feasting upon the various delights, the townspeople exercised their rights as citizens of a democracy (one guest brought the recently deposed king baked into a tasty lasagna) and voted. 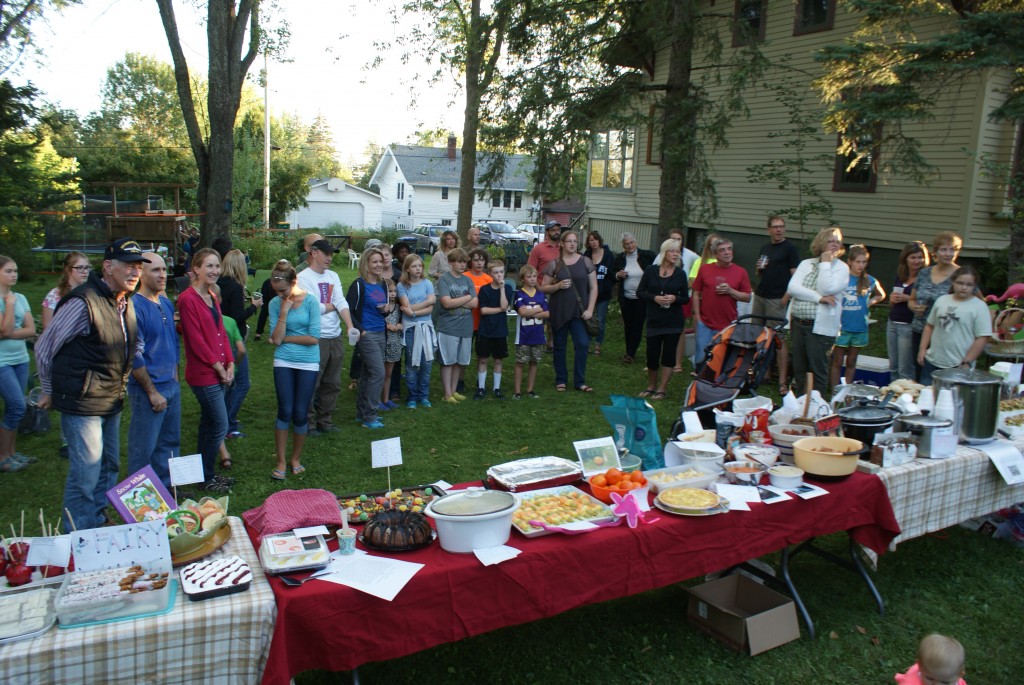 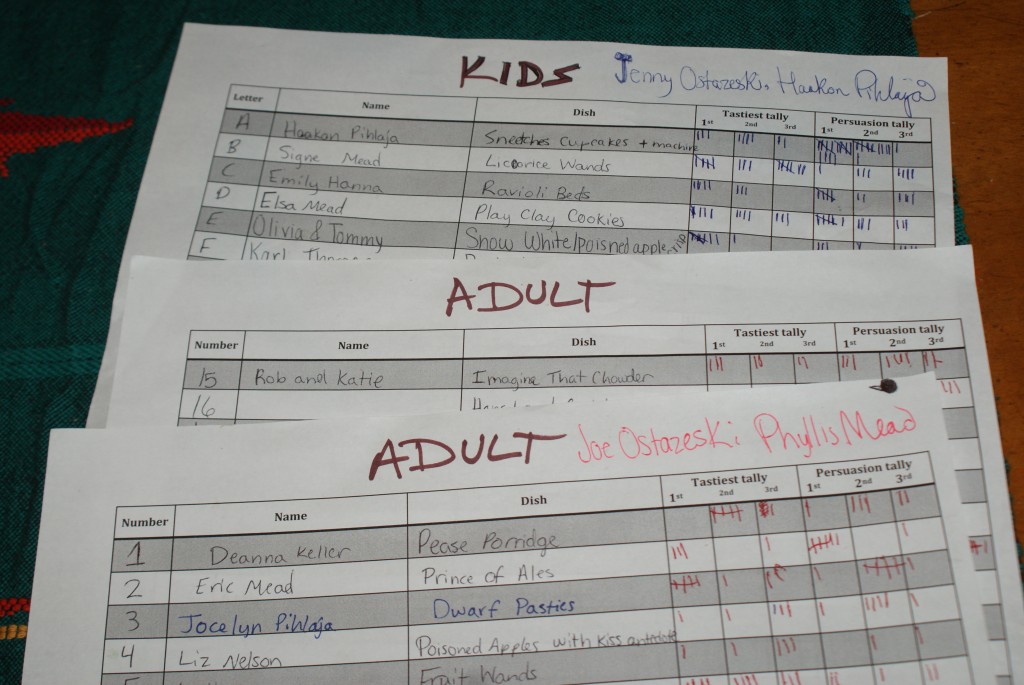 There were two categories (Best Taste and Best Tie-In to Story) and two age groups (under and over age 15). When the winners were announced, the elders received their baskets, the youths their gift cards. Darkness fell. Everyone returned to their cottages. Kindly John Barleycorn left a growler of beer for the hosts.

Some time later, this delightful tale gained a ridiculous coda.

You see, young Paco’s Star-Bellied Sneetch machine had been such a hit that he won the Best Tie-In to Story award in the Youth Division. When one is eleven, one gets special dispensation and can win a prize even as a host of the party. It’s in the handbook.

Thus, our lad had a ten-dollar Target gift card living in his wallet. After a few weeks of illness (Every good story requires suffering, all the better if it involves a weak cough, yes?), the boy, believing in the healing power of pixels, decided he wanted to invest in a new video game for himself. So we went to Target and tested the game there. The thing was very fun.

It turns out he could buy a used copy of this game at a different store, for significantly less. He wondered, therefore, if we, as people who shop at Target with some frequency, would be willing to buy his gift card from him so that he could put the cash toward the used game. It made perfect sense, really.

Indeed, it made perfect sense for us to have paid for the initial purchase of the gift card and then, some weeks later, to buy that same gift card off our own child.

Speaking of situations I could never have anticipated back when I dreamed of becoming a parent.

Fortunately, the video game has made Paco feel as perky as Jiminy Cricket; we now have funds to buy the emperor new clothes from the Merona, Xhiliration, and Mossimo lines at Target; and the chain of events from having a wonderful party through paying my child for something I already bought has made me feel like Euna, the princess who laughs as she watches a mouse, a beetle, and a catfish attempt to help a man extract himself from the mud.

we all lived happily ever after.

14 responses to “Being Able to Climb a Princess’ Hair Is Pretty Ludicrous, Too”