As God Is My Witness, Each Individual Shall Tote His Own Weary Load

Behind our house, across the alley, there lives a cohort of quasi-charming renters. Moving in after several disastrous previous occupancies, this group of young men demonstrates that young folk renting a house together don’t have to be feral beasts lacking even the most basic notion of boundaries. I mean, seriously, there’s a reason I regularly urinate a distinct line of piddle at the end of our driveway–no easy move for a dame, incidentally. I do it because I’m sending. a. message.

Indeed, because they behave as though at least one person in their childhoods cared enough about them to communicate the provision of the social contract titled “We Don’t Put Our Figurative Feet on the Figurative Furniture,” these young men have been fine neighbors. What’s more, I appreciate these fellows for restoring my faith in college boys (*typed the college instructor*).

At first, we weren’t sure about them. The previous tenants had behaved terribly poorly (as chronicled here and here, if you care to read stories of Nasty Renters Past), to the point where we were a bit shell-shocked and expecting the worst. Their first weekend in the house, when ten cars pulled up on Friday night and parked out on the avenue, I started warming up my digits for some late-night tapping out of 911 on the telephone keypad. However, in the best of all possible developments, each friend who parked his car out on the avenue also carried, from his car into the rental house,

Turns out the new renters are committed computer geeks who host overnight LAN parties, wherein all comers hook up their computers, and then they sit around a big table in the dining room and game furiously into the wee hours.

That kind of partying is Neighborhood Watch Approved, for sure.

All in all, then, we’ve not minded this batch of renters–from a relative distance, with the occasional “Hi, how are you?” tossed out when we’re getting in our cars at the same time. Sometimes, I pull a little Mrs. Kravitz and peer through my window at them hanging out on the driveway, under-dressed for the weather, taking a smoke break in between rounds of first-person shooterizing. One time, I drafted the biggest guy, who then drafted three of his roommates, into helping Byron move an organ out of our basement.

For the most part, we exist in a state of benign indifference towards each other. Some of them are still at college; some of them have graduated and have jobs. We don’t chat, but their behaviors allow us to sleep at night, so I’mma call that a win.

My feelings toward them perk up when I’m feeling particularly Mrs. Kravitz, though. If I’m vacuuming the back porch and see one of them wandering around wearing only one shoe, I am delighted. If’ I’m watering seedlings that gain life on that same porch, and I see a young woman pull up and enter their house, I get giddy for The Lads and sometimes yell, inside the echoing cave of my head, “SCCCCOOOOORRRREEEE!”

And sometimes, when Winter is delivering Her loads, I find myself grinning wildly at this: 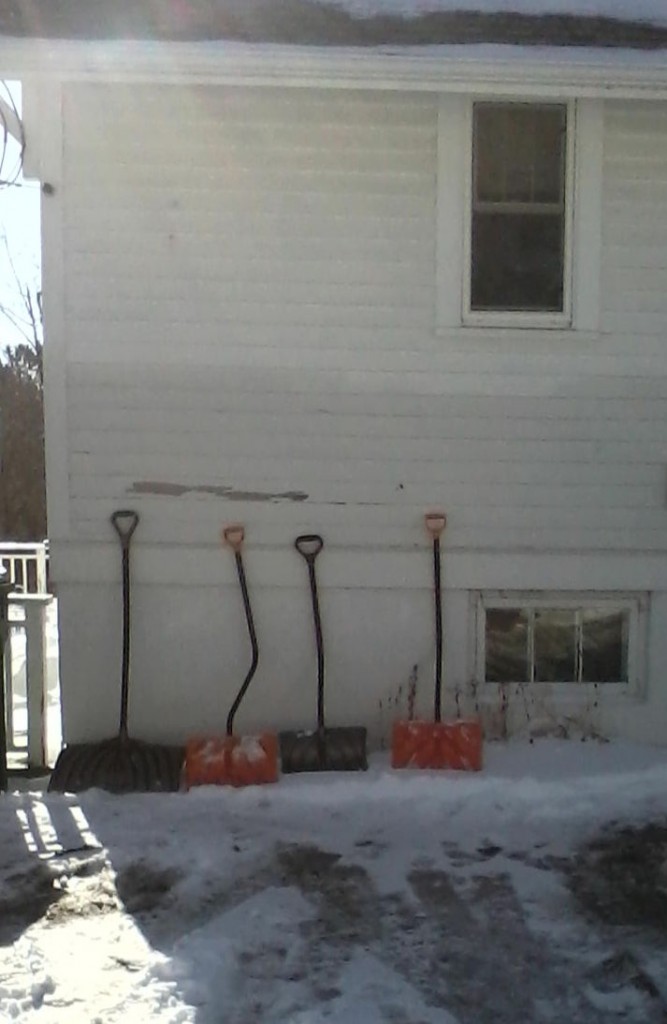 Can’t you just imagine the conversation that led up to this?

“I’m not buying a shovel. I don’t have any money. Plus, I hate shoveling. Someone else can buy a shovel.”

“Dudes, we need a shovel. I bought the beer last week. One of you has to buy the shovel. I only make $8 an hour; I can’t keep this house in beer AND shovel.”

Silence as they all try to outlast the others in unwillingness to Buy The Shovel.

Finally, the conversation starter announces, with great frustration, “Fine. I’ll buy a shovel. But it’s going to be my shovel, and I’m not sharing it with any of you losers. I’ll use it to shovel out my car, and my car only, and I’m keeping it in my room. You dorks cannot touch my shovel. EVER.”

The next day, six inches of snow fall. One guy easily digs his car out, throws his coveted shovel in the trunk, and drives off to work.

Three other guys are late to work because they had to spend an hour grubbing their cars out with meaty paws and the head of a broom (where did that handle go?).

During a quiet moment when everyone’s characters are trudging to their next mission in Call of Duty that night, one of the renters notes, a bit too casually, “So, hey. It looks like we all have shovels now. Like, we don’t really need to sleep with them in our rooms or anything, what with us each having our own. Just maybe, you know, leave your shovel wherever. I won’t touch it.”

Thusly, the peaceable line-up of shovels is born.

Moments after Shovel Truce 2013 is established, though, The Short Guy announces, “Time out. I’m hungry.”

He walks to the fridge.

Turns, accusingly, towards his roommates.

“Who the hell ate my leftover Famous Dave’s? I had clearly marked the box: THIS BBQ BELONGS TO SHORT GUY. DO NOT TOUCH MY PORK ON PAIN OF ME PLANTING AN EXPLOSIVE CHARGE IN YOUR INSTALLATION.”

Simultaneously, three mop-topped, meaty-pawed figures drop their heads guiltily. One nibbles at a piece of fat under his fingernail while another picks a tidbit of meat out of his front teeth.

It is the Clever Guy who pipes up with a distracting, “Hey, forecast says snow tomorrow. Was my shovel orange or black? Do you guys care if I use one of your shovels by mistake?”

The answer to his question comes in the form of rapid-assault gunfire ricocheting out of three computers’ speakers. Blood appears on his screen.

How else will he ever learn that

Shovels Are Not For Sharing?

all I ask is hilarious neighbors

Bewitched references for those who get them, do you wish I lived across the alley from you?, shoveling when you’re young

12 responses to “As God Is My Witness, Each Individual Shall Tote His Own Weary Load”