Closer We Are to Pork

What I crave more than anything during this year in Turkey is something lusciously fatty, thoroughly smoked, noticeably aged–something that either snaps crisply or wobbles slightly when laid on a platter.

Silly poppets:  no matter how many martinis you’ve had already today, do not err and peg the above as self-description.  Because then–oddly–you’d be thinking that I came to Turkey only to crave myself.  And that’s not at all what has happened during the last nine months (it is, however, exactly what happened back in ’74 when I made the stupid decision to renew my passport and head off on a week-long junket to Paradise only to realize afterwards that, sure, I’d been to Paradise, but I’d never been to me).

Definitely, during this year of craving, we’ve made the most of our trips out of the country, the odd ten-day vacations that I already recall fondly as 30-Meal Tours of Wilbur.  What’s more, my mom cemented her place in my will (note to self:  make will) when she responded to my request for a package of pepperoni and tucked the yum into her suitcase before visiting last month.

But still.  We miss Porky.  We pine for Pig.  The ache runs so deep that I found myself licking the television the other night when the kids were watching Loony Tunes.

Luckily, I’ve found a diversion, something that distracts me from this yen for swine.  Applying the same technique that unlocked Kafka for me in Honors English during junior year of high school, I’ve turned to dreamy musing.

I dream of bacon.  The dream always starts the same way, the way all my best dreams launch:  with a vision of my Groom. 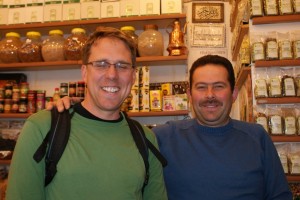 Groomy has his eyes closed here (because–HELLO–it’s a dream, so we’re all sleeping, like in Honors English class) as he poses next to our favorite guy at the fruit & nut shop over in the town of Urgup. Nut Dude never fails to hasten a glass of tea into our hands before we exit the store, smiling and clutching our sesame-covered peanuts and ginormous figs. 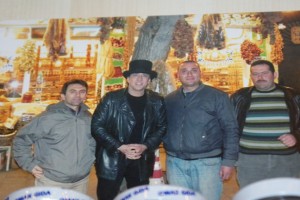 A big moment for Nut Dude occurred a couple of months ago, when a cel-e-brit-eeee came to Cappadocia. Why yes, yes it is:  Nicolas Cage, most recently of mug shot fame. But back in the day, back in Urgup, Nick was just another famous L.A.-based American with a thick wallet meandering into the fruit & nut shop looking to load up on lokum and tarhana. 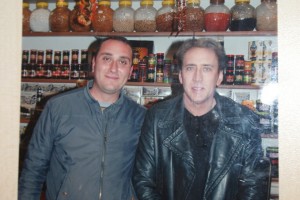 Nut Dude and all his colleagues maintain to this day that–despite those pesky headlines about “Cage Yanks Wife and Punches Cars“–Nicolas was a charm, a real “iyi” guy, ready to pose for all photos, taste all sugared kiwis, and waddle out with five bags of Turkey-specific gifts for all his many beloveds .  Thusly bolstered by delicious tastiness did Ghostrider 2 find its heart amidst the dusty Cappadocian mesas.

Here’s the thing.  Nicolas Cage was in Adaptation with Meryl Streep. 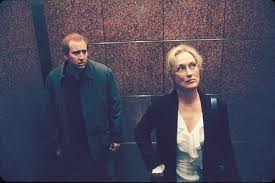 And Meryl Streep was in River Wild with Kevin, um, what’s his name? 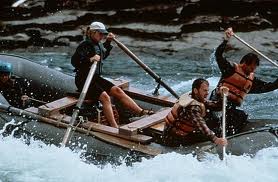 Dish it up for me, Chef. ‘Cause I can hear the sizzle; we’re cooking with heat now…roughly five very hot degrees:

From Groom
to Nut Dude
to Nicolas Cage
to Meryl Streep
to Kevin Bacon.

I also miss libraries and diversity

14 responses to “Closer We Are to Pork”