A whimsical side-adventure to our road trip this summer was Cupcake Wars. I’d like to say I forced my family into participation because that would make me sound strong and powerful and as though I wield a Dominating Will,

but if I did try to convince you my family needed to be forced to eat cupcakes, then my pants would be on fire, and I’m not in the mood to deal with scar tissue. Truth is there was no grousing in response to this family challenge–although Byron would have bowed out earlier than the rest of us because he’s the kind of effer who can look at a sugary baked good and say, “No thanks. Don’t need any.”

I tried one time to say those words, yet the strangled gargle that emerged from my larynx ended up sounding like, “Please, sir, may I have another?”

‘Twas I, therefore, who declared war on the cupcakes. Too many of those little buggers running around, smearing their buttercream on the walls, taunting children on the playground. They needed to be taught a lesson, hardcore.

We launched our first attack at Georgetown Cupcake, the business featured in The Learning Channel’s program D.C. Cupcakes (wherein two very nice-seeming sisters awkwardly deliver “no, these aren’t scripted” barbs aimed at creating tension where none exists; the show is such a flatline, in fact, that I neither scooted to the edge of my seat nor quivered nervously during the episode when they made a dog sculpture out of cupcakes and just before The Reveal, the pup’s fondant nose fell off. Normally, a nose falling off elicits from me at least a wee gasp; I may be a Will Dominatrix, but I’m not entirely unfeeling). 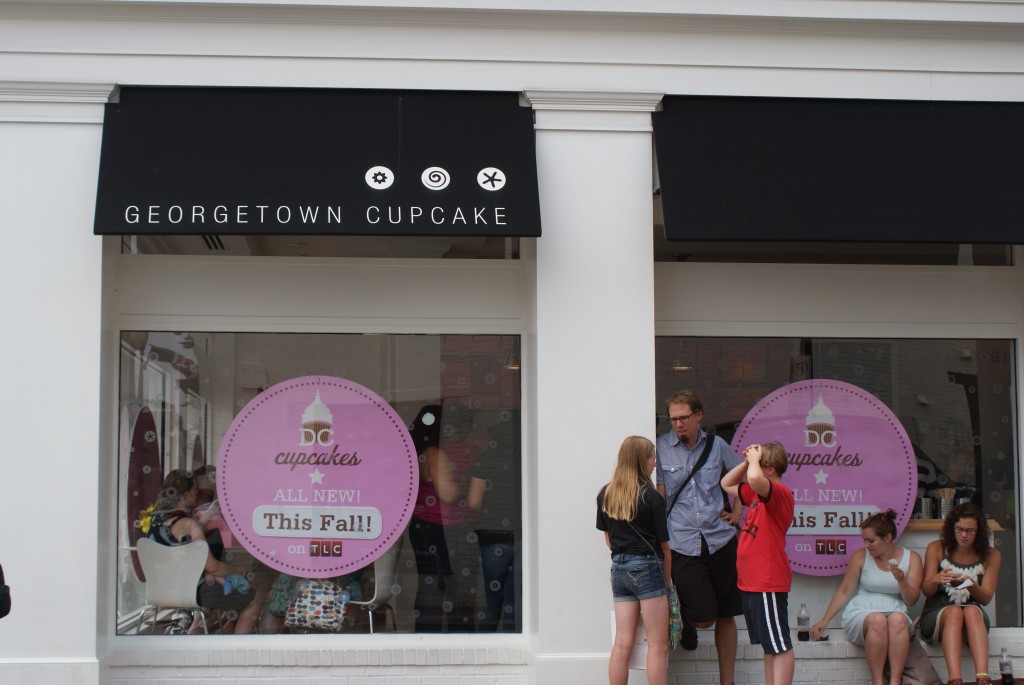 The storefront is quite nice, and once inside, one does feel that a television program could break out at any moment.

We ordered a sampler of gorgeous-looking cupcakes: 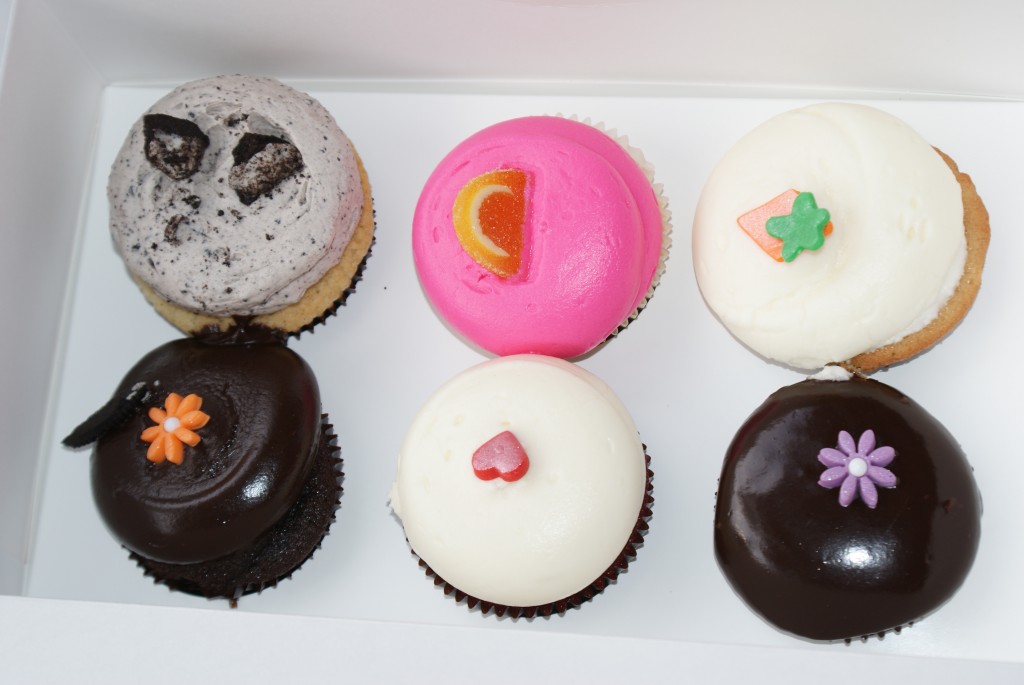 Then, having received a communique from the general at the front lines (“Reinforcements needed at Sprinkles!”), we moved our battalion down the road to the next point of engagement: 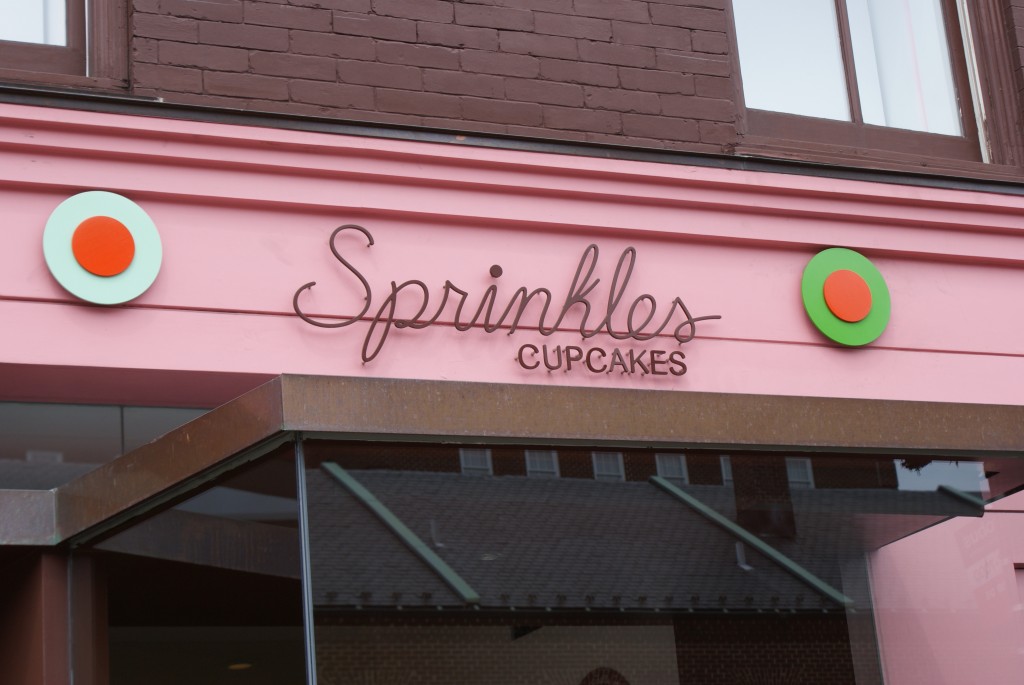 While Georgetown Cupcakes was founded in–haha! I’ll never tell!–Sprinkles Cupcakes has its roots in Los Angeles and is much-touted as the go-to shop for various celebrities, including Katie Holmes. If eating a Sprinkles cupcake could assure me of the kind of happy life Holmes has been enjoying, count me

Just when I started thinking about Katie and divorces and Scientology and crazy-intense alien husbands and the collateral damage inflicted on children, my attention was caught, magpie-like, by something shiny.

Or at least what constitutes shiny to someone with a sweet tooth. 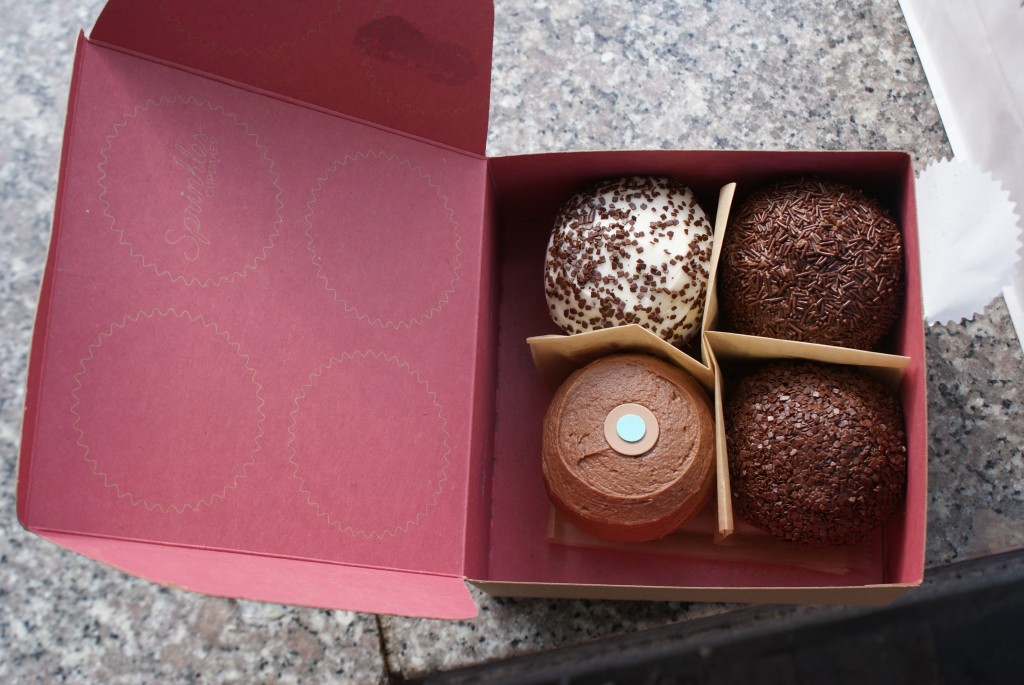 Lots of times, “shiny” is covered with sprinkles. Especially when it’s from a shop named Sprinkles.

It only took me a few days to riddle that one out.

With ten cupcakes from two famed shops in hand, we sat outside and cut each cupcake into four bites. After the first few bits of goodness flew into our maws, we looked at each other and began the voting. Who would win the war? WHOOOOOOOO?

“This chocolate ganache one is okay.”

“The vanilla one does the  job.”

“The lemon one seems all right.”

To a one, these expensive, ballyhooed cupcakes were

They looked great. However, as is the case with most cupcakes I’ve ever met, they were no piece of cake. Always, no matter the advertising or cost, I’ve found that cupcakes are…okay. Yet I continue to believe that somewhere a cupcake exists that’s something extraordinary, something sock-knocking-off-ish, something that causes me to yell “Wow!” with such enthusiasm that crumbs poof out into the air to punctuate my exclamation.

Because I’m not easily daunted, particularly when it comes to important scientific-type research, I insisted we also try the cupcakes at New York City’s Magnolia Bakery. These sweets were made famous by the ladies of Sex and the City; on occasion, Carrie Bradshaw would extract her ankles from behind her ears long enough to belt a garbage bag around her torso and teeter her Louboutins over to the bakery so as to enjoy cupcake and conversation during her refractory period.

We bought a couple of the Magnolia’s “Grand Central” cupcakes, which we then sat and ate in front of Rockefeller Center. 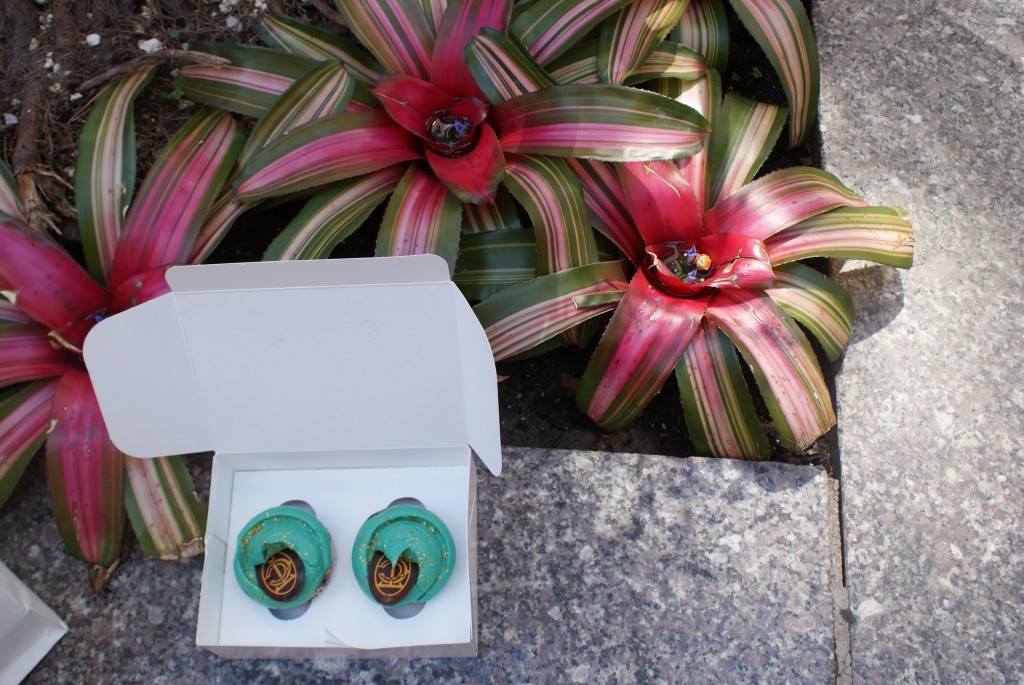 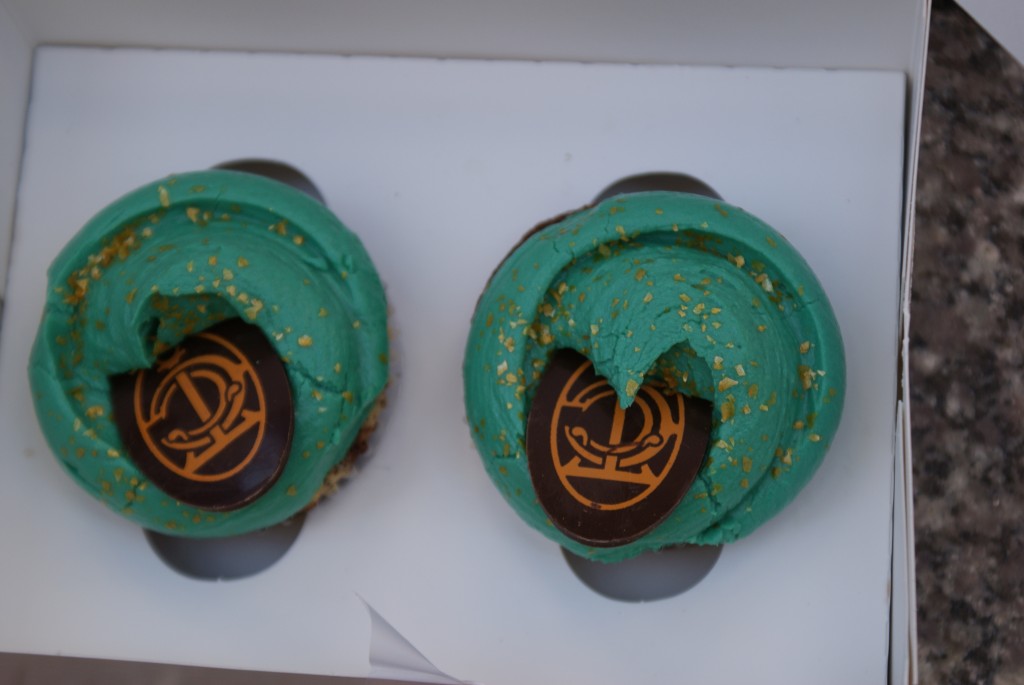 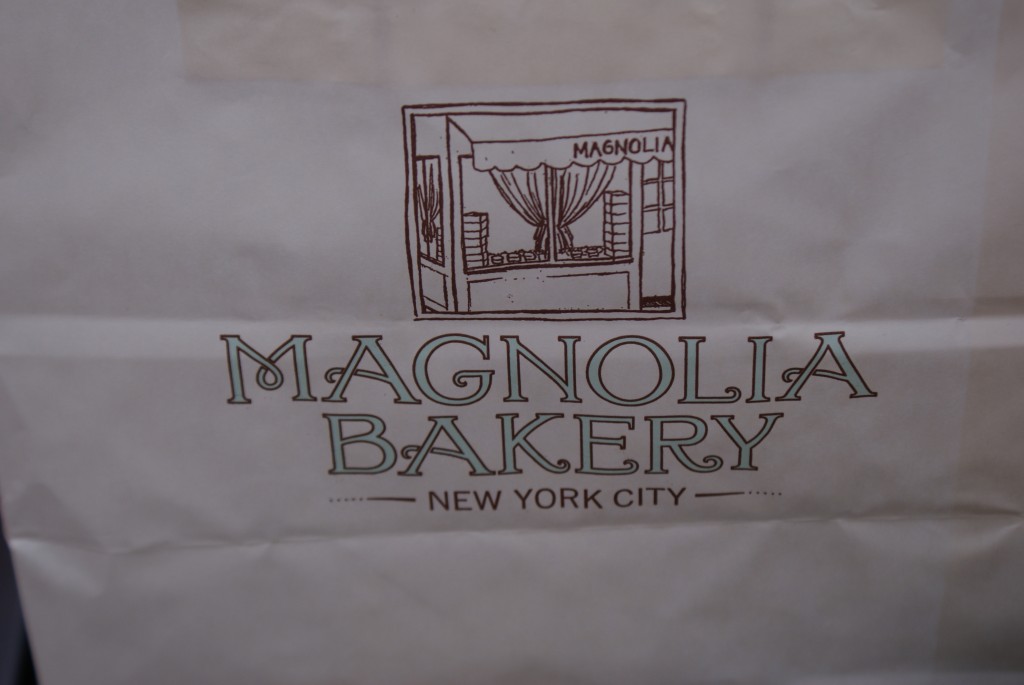 The Magnolia cupcakes, like the others, were fine. They were a little more of fine than Georgetown Cupcakes’ products, and they were distinctly better than Sprinkles’.

In each case, the cake didn’t take the cake. The frosting did. Magnolia had the best buttercream, and that fact, coupled with the bonus chocolate medallions stuck on top, gave NYC the win.

Not only did we declare peace by parceling up Europe–the spoils of every war, right?–we also drafted The Treaty of Fat Thighs, which vowed eternal detente with Cupcake. From this day forward, we shall leave Cupcake well and goodly alone. Its borders are safe from future incursions by this faction.

It might do well to lock up its medallions and buttercream, though, in the event that our hunger reignites.

However, it’s a fair guess that, with Gourmet Ice Cream and Silky Smooth Cheesecake flanking Cupcake’s borders, my family will wage its next war in richer territory.